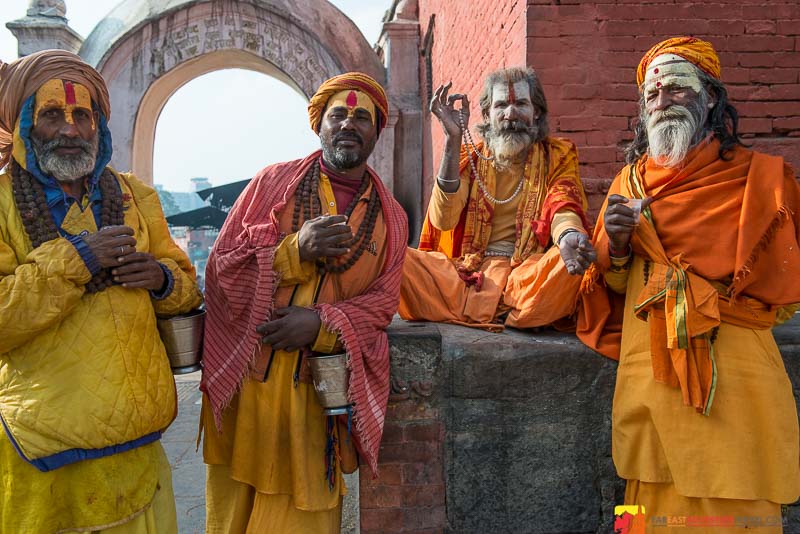 The last few days in and around the Kathmandu Valley have been a little more challenging with added security from police and the army for the SAARC(South Asian Association for Regional Cooperation)Summit. Leaders from India, Bhutan, Afghanistan, Sri Lanka, Maldives, Bangladesh, Pakistan and of course Nepal have all been in meetings. In Bhaktapur The Taumadhi Square was closed off for some of the first ladies of the country’s leaders who were paying a visit and entertained by local dancers. We were lucky to be allowed to watch from the steps of the guesthouse and could almost see the whole stage-it was worth the bit of inconvenience having to stay within the guesthouse confines.

Bhaktapur is one of the best preserved of the 3 main cities of the area, Kathmandu and Patan being the other two. I will have a more details on this amazing destination in a future episode of the podcast. In this week’s episode-The Sadhus or holymen of Kathmandu.

When you visit Kathmandu you will see them wandering the streets, usually close to major tourist stops. They are usually dressed in an orange or saffron coloured robe, with an elaborate tikka, coloured marks on their forehead, and always bearded and carrying a metal pail. They are Sadhus-holy men who have renounced all of their worldly possessions on a journey to find moksa-in Hinduism- liberation. They live in temples, like the Pashupatinath Temple here in Kathmandu, the forest and caves.

Sadhus are supported by public donations as they are seen as a benefit to the community. Their practises are thought to burn off bad karma for everyone.

It is also acceptable in the Hindu religion for women to practise this life-they are know as Sadhvis.

In India alone there are an estimated 4 to 5 million Sadhus that live throughout the country.

It is actually considered the fourth phase in a Hindu’s life, preceded by studies, fatherhood and being a pilgrim.

To become a Sadhu one must first seek out a guru and perform “guruseva” or service. It is during this phase that the guru will observe the candidate and decide whether they are worthy of sannyasa, becoming a Sadhu.

The life of a Sadhu is very hard. They actually consider themselves dead, and in India they are in fact legally dead. They also may be required to attend their own funeral.

Sadhus also may consume cannabis as it is considered part of their worship of the God Shiva, who is believed to have enjoyed the plant himself.

Sadhus rely on donations from lay people to survive and some quite often suffer from hunger and poverty. They perform many rituals and duties for communities including blessing a wedding or marriage and are even called in to help resolve disputes between individuals and help resolve family problems.
There is also skepticism particularily in urban areas regarding the real lives of some Sadhus-who may be just putting on a costume in order to make a living.

In the Hindu view true Sadhus are the living divine. What human life is truly about-religious enlightenment and liberation from the cycle of birth and death.

Around Kathmandu you will see many Sadhus. Often they will approach you will a flower that they are happy to place on you. Or they may offer a blessing and tikka, but they will in both cases expect some baksheesh. They will undoubtably expect something if you take their picture.

I’ve have been fascinated with Sadhus and their way of life-meeting my first one here in Kathmandu just a few years ago. I think a life devoted in search for the release of suffering should not only be admired, but supported. The benefits communities receive from their sacrifice and devotion are infinite. Didn’t someone else at one time seek the same release, found it and passed on his knowledge to others….

It has been absolutely amazing, renewing, rewarding, challenging, I’m running out of superlatives for the last 6 weeks of traveling in Nepal. Thanks so much for listening, until next time this is John Saboe from Kathmandu-safe travels and Namaste!