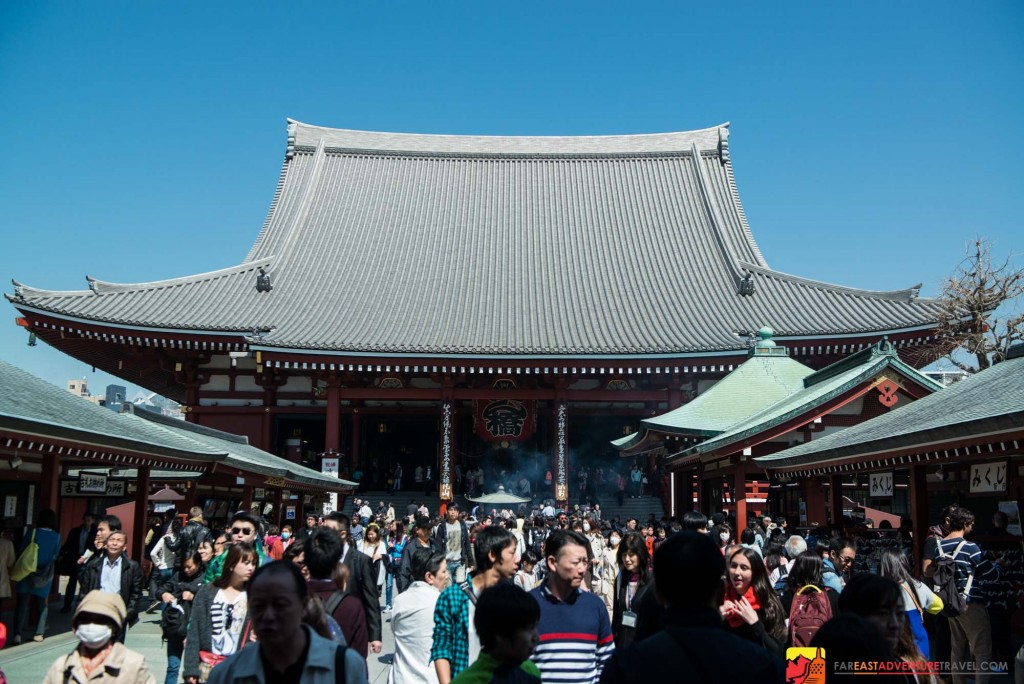 Senso ji is a Buddhist temple located in the Asakusa District of Tokyo. It is the oldest temple in Tokyo dating back to 645CE. It’s one of the most popular sites to view in the city with over 30 million visitors a year. Thousands come daily to worship, pray, and eat!

The Nakamise-dōri is the street on approach to the temple that houses many shops. It was first opened in the early 18th century when locals were given permission to set up their own stores and sell goods. In 1923 the Great Kanto earthquake destroyed many of the buildings. It was reconstructed then subsequently destroyed again during the bombings of WWll. It was rebuilt again after the war as a symbol of peace and rebirth to the Japanese people.

The Hozomon or Treasure House Gate marks the entrance to the temple area. There are three large lanterns with the chochin, the largest one that hangs in the center of the gate. On either side two Nio statues, warriors that stand on guard to the temple.

More from Tokyo’s Senso ji Temple but first check out what you can expect to get in a typical sized Japanese business style single hotel room .

The Hondo or main hall of Senso ji, dedicated to the Kannon, or Goddess of mercy, Guanyin. It is said that two fisherman caught a statue of the Kannon, or Guanyin in 628 that started the worship of the deity in Asakusa. Now’s that’s an extreme fishing story. The Buddhist priest who in 645 established the first temple on this site fulfilled his dream of never allowing the deity to be seen by humans, still followed to this day. Worshippers toss coins, clap their hands and bow as they pray to Guanyin.

Not to be missed on the east side of Senso ji is the Asakusa Shinto Shrine. Shintoism is the indigenous religion of Japan. All Shinto shrines have a cleansing or washing area where the hands and mouth are rinsed to purify one before entering the main shrine area. The Asakusa shrine is dedicated to three men who helped establish Senso ji. The two fisherman that caught the statue of Kannon, and a wealthy landlord.

Easy to get to you can reach Senso ji by taking the Ginza subway line to Asakusa an easy connection from most of the larger train stations in Tokyo. A rest back at my little hotel room in Ginza before more amazing things to see in Tokyo, Japan.

That’s it for this week’s episode, thanks so much for watching. Next time on the Far East Adventure Travel Podcast-Seoul, South Korea. Until next time this is John Saboe, safe travels and Namaste!