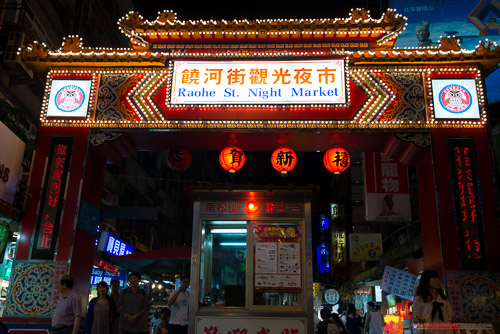 The Raohe Street Night Market is one of my favourite night markets in Taipei, Taiwan. Located in East Taipei near the MRT blue lines Houshanpi station and the Songshan Train station.

Raohe Street Night Market is one street that is lined with mostly food stalls from one end to the other. It is unlike Shilin, the king of night markets in Taipei with it’s maze of streets and undercover mall and massive crowds.

Raohe is one of the oldest night markets in Taipei but is usually not too crowded. At least during the week. You can still do a little shopping and it’s actually close enough to visit Wu Fen Pu, the largest clothing market in Taipei. Night markets in Taiwan are great places to hang out, meet friends, socialize and people watch.

The Raohe Street Night Market is only one street but it’s loaded with an amazing variety of snacks and food. Like other night markets most stalls specialize in one item. This dumpling crew couldn’t keep up with the line-ups.

Most nightmarkets in Taiwan have their share of amusement games. She’s really good! She must be in the army.

Many night markets in Taiwan are also anchored by a temple of worship. This is The Ciyou Temple at the east end of the market. Built in 1753 it’s dedicated to Mazu, Goddess of The Sea.

Back to the nightmarket, aquarium fish anyone? For the tank at home of course. And the dumpling line-up isn’t getting any shorter.

The Raohe Street Night Market in Taipei, Taiwan. For FarEastAdventureTravel.com this is John Saboe.

Chinese New Year's Eve Dinner-What I Ate? Plus A Visit To The Most Famous Temple Of Taiwan

Chinese New Year in Asia-What To Do, Where to Go!