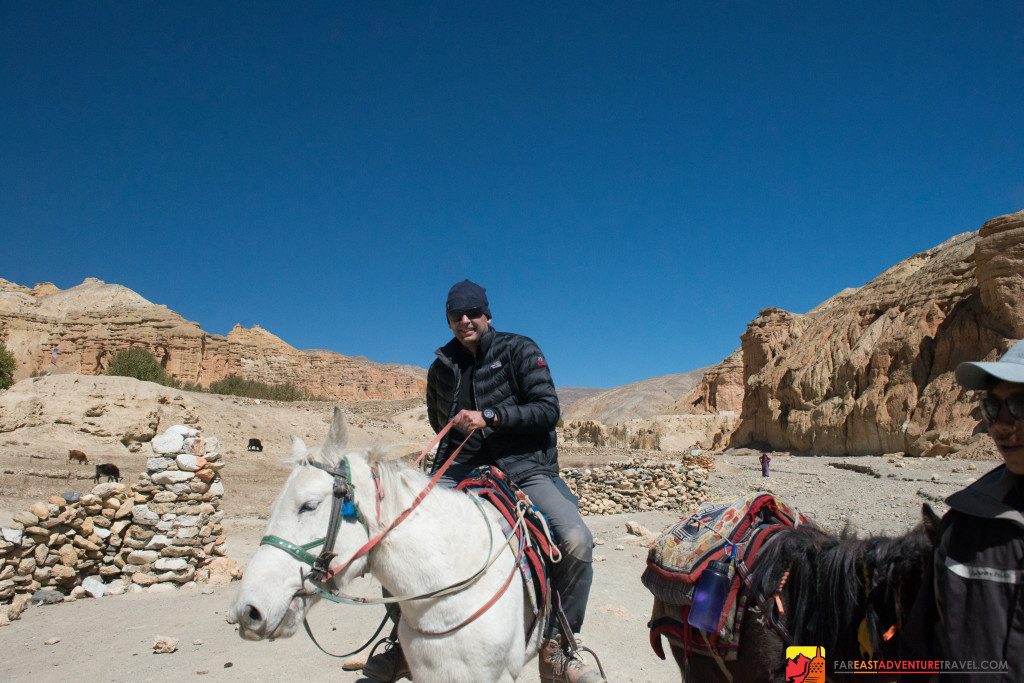 I recently had one of the most thrilling experiences ever when I rode horseback from the heart of the Upper Mustang region in Nepal to some secret caves formerly used by The Khampa Warriors, soldiers, of Tibet. We were fifty kilometers from the border of Nepal and Tibet, China.

The Upper Mustang region of Nepal lies in a remote section of the country that borders Tibet (China).

It’s one of the world’s top adventure sites at the moment because the region is changing. China has built a road from their border to the largest city in Upper Mustang, Lo Manthang. Plans are for another road from Lo Manthang all the way to Kathmandu. 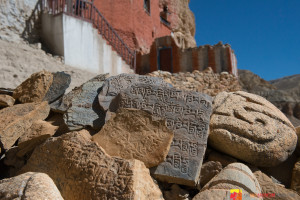 This area will never be the same.

Benefits to the people here will be significant. A quicker route to medical care, easier access for tourists and their dollars, and added infrastructure will help with everyday needs. But with easier access will come influence from the outside world and possibly a slow deterioration of a wonderful culture and way of life.

Now would be a good time to visit.

On my recent trek through the region I stayed in Lo Manthang, center of this former kingdom. The King still lives here. He gave up his power in 2008. If you made arrangements ahead of time not that long ago, you could pay him a visit. Even as a tourist! Now his health is poor and his visibility is limited.

Horseback Riding In The Upper Mustang

Trekkers usually start with a flight from Pokhara to Jomsom, situated in Lower Mustang. It then normally takes five days to trek from Jomsom to the largest town in The Upper Mustang, Lo Monthang. I had two days there.

The first, spent with a little walk around the town and visits to the Buddhist Monastery and Temples. The second, a horseback ride to some caves so close to The Tibetan border they were used as a hiding place for the former independent country’s soldiers.

I still remember my guide Chandra’s first mention of horseback riding here. We had just met in Pokhara at my hotel the night before our flight to Jomsom.

We were going over the itinerary and possible options when he said this was a great way to visit this part of the region. I was so excited. Horseback riding through a Tibetan cultural region with a distant backdrop of The Himalayas. Like a dream. 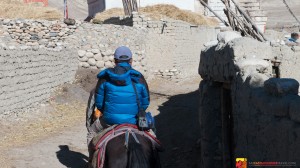 The Ride To The Khampa Warrior Caves

On the second day in Lo Manthang we were met in the morning at the guesthouse by the owner, who arranged the horses, and our horseman. We had two horses saddled and waiting for us. I was told they had to find the biggest horse in town for me, with laughs from everyone. I’m 195 centimeters tall and weigh 95 kilos. I have learned to embrace the constant reference to my size in this part of the world. I’ve found it to be a good icebreaker.

It had been a few years since I had been horseback riding. Initially it was a little awkward but the rhythm came back to me and we were on our way. Our horseman walking just behind us.

We were going at a slow pace down a steep path out of the village area past stupas, the bulbous like structures that contain Buddhist relics, before we hit a flat plain and started passing by a village. 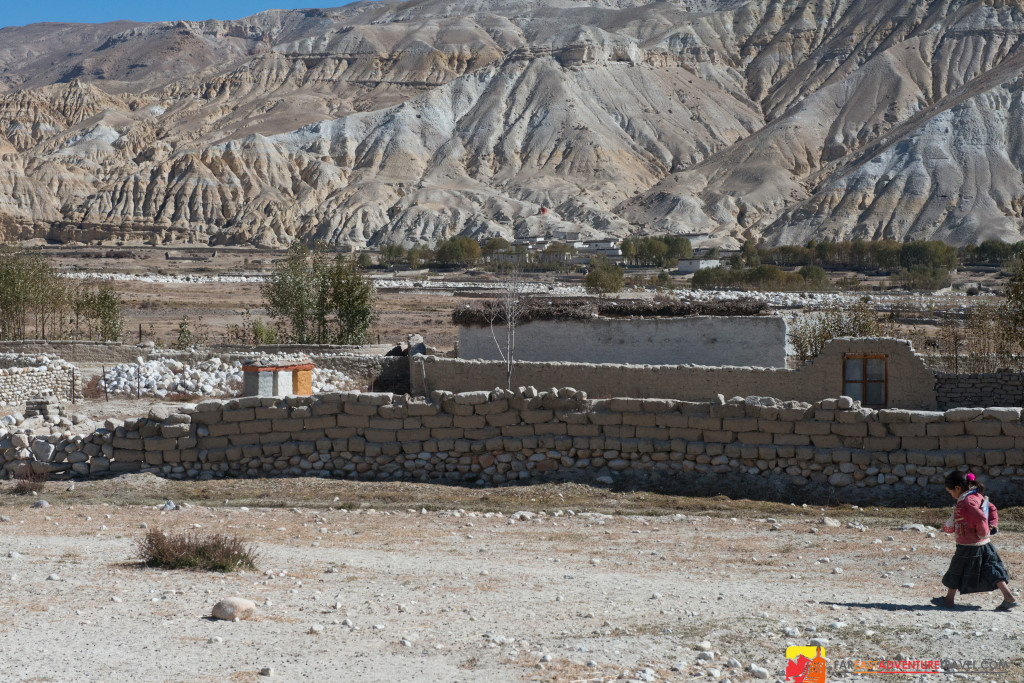 Chandra is a natural. He was making the sounds I’ve heard Mongolian horsemen make when they’re riding. First some whistles, then “whoo, whoo.” Why are you making those sounds” I ask. “I’m letting the horse know I’m saying hi to the animals we approach”, says Chandra. “This is a tradition here”.

We were coming up to some farms with dzo, a cross between a yak, a long-haired bovine found here and in Tibet, and a cow. “I’m giving them a welcome”. I feel like I’m in another time. Riding horse on the same trails that the salt traders used for hundreds of years. It’s humbling. I’m overwhelmed by the beauty of the mountains and terrain. The blue sky here is piercing and a distinct tone of light I’ve only seen in Tibet.

We dismounted and head for a small gompa (temple or monastery), to have a look around.

The village is small and there is a lack of activity. We’re told alot of people have left for the season. Many will travel to India for work and to escape the harshness of the winter. 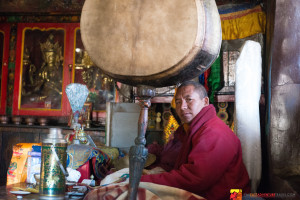 Further up the village we get closer to the caves. But we stop at another gompa. This time we are greeted by the Lama (head monk).

He told us there are a total of 3 monks that look after this gompa. Usual only one is left to caretake the temple at this time of year. His English was very good and he asked me the usual questions.”Where are you from?” “Is this your first time to Nepal?”

We then headed for the caves passing a monastery dorm. A young monk by the name of Norbu introduces himself. Curious and eager to try his English with me we had a nice talk before we started our hike up to the caves. 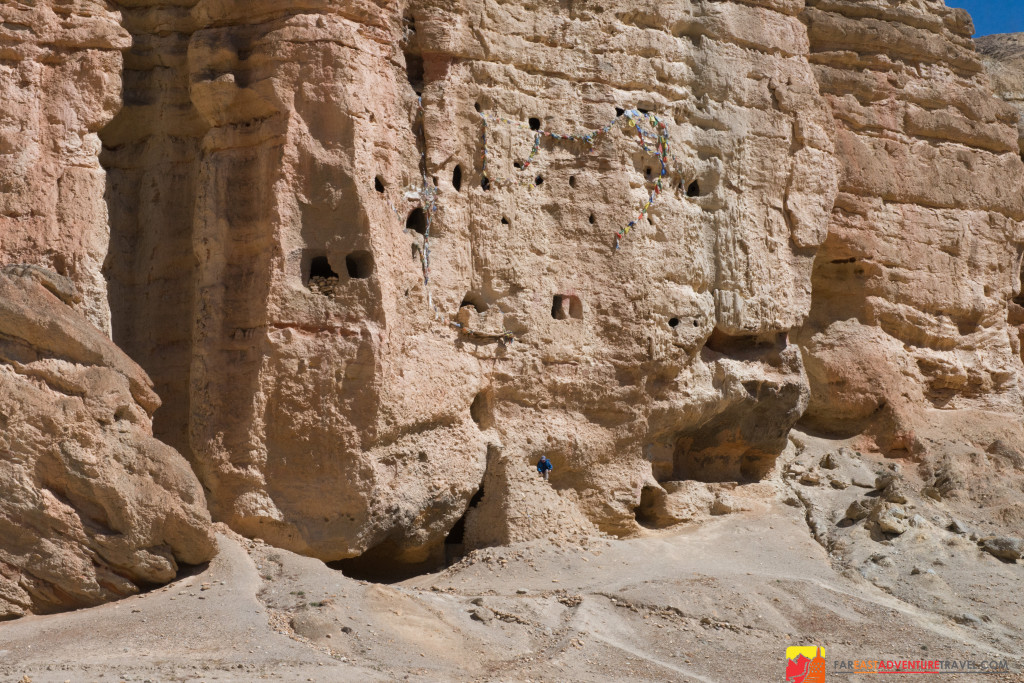 Chandra goes first to see if the door is locked that leads through the cave system. It is so we must wait for the caretaker.
Within a few minutes a woman shows up walking and talking as she makes her way up the steps to open the door jangling her keys. She was dressed in traditional Tibetan clothing and seemed to be preoccupied and mad. She lets us in and waits at the entrance.

The caves are maybe at best 130cm from ground to highest ceiling point in the smaller rooms. I was trying to imagine the Khampa warriors hiding out here and living in these conditions for 5 years. 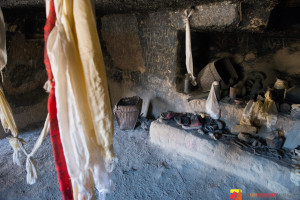 It’s unbelievable. There are still shoes, pots, and other items left over from their time here. For years after China invaded Tibet the soldiers were sustained with help from the United States. The C.I.A. would reportedly airdrop supplies including arms for the soldiers. It wasn’t until 1972 when then U.S. President Richard Nixon met with China’s Chairman Mao Zedong during their famous summit. Mao said to Nixon if you want to do business with China stop supplying The Khampas with arms. The airdrops stopped.

We moved in and out of different rooms. Moving up ladders to more levels. 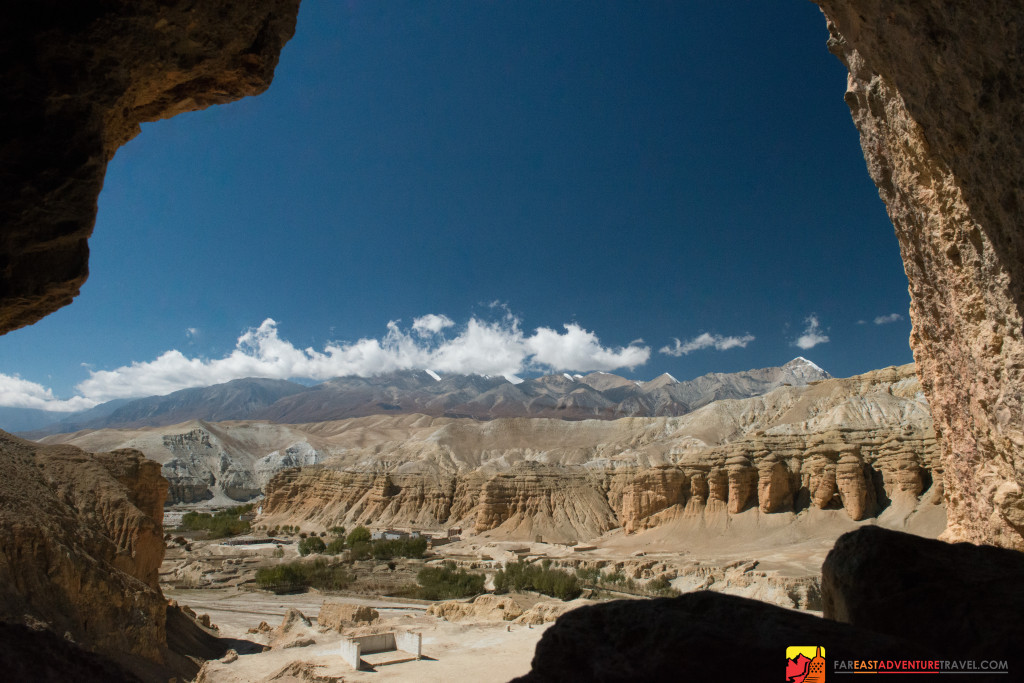 As I was staring out at the remote plains and peaks I wondered what it must have been like to have had to hide here for four or five years. Thinking about your family. The Dalai Lama. The country and way of life you were defending. Hoping you weren’t shot one day while running out to get some water. 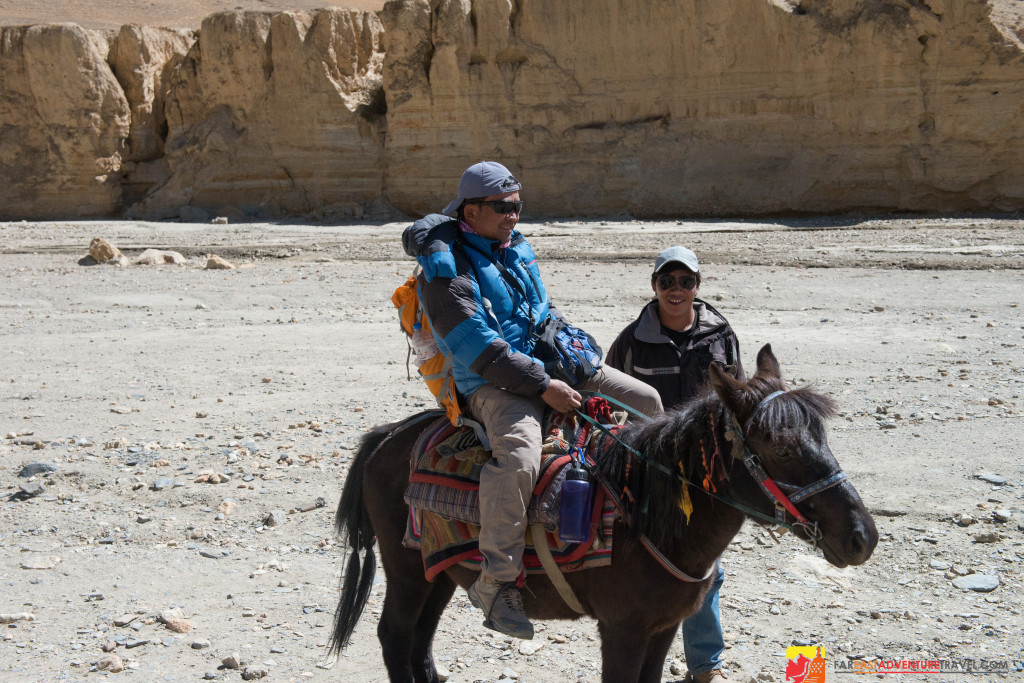 We finally made our way back down to our horses. We wanted to get back to Lo Manthang in time for the puja celebration (worship). It would take place that afternoon in honor of the fall harvest, performed by the Lama and monks of the monastery.

The Ride Of My Life 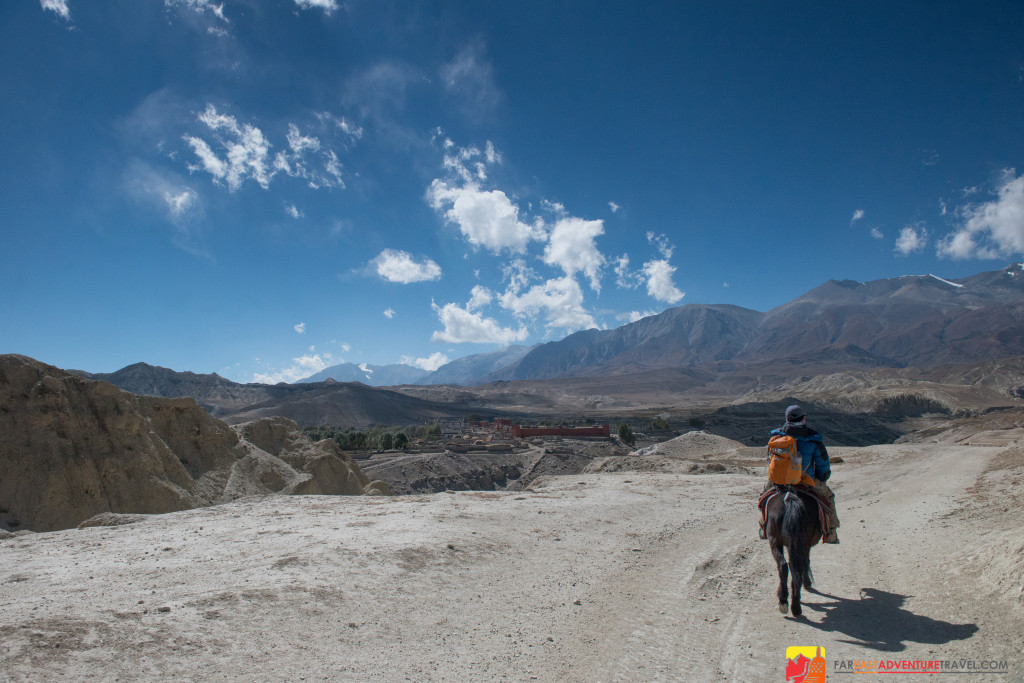 We rode away at a steady pace. Chandra decided to pick-up some speed and gave his horse a kick and yelled out his Tibetan horse calls and commands. Choo, choo (go, go!) I followed Chandra. It felt like the horses wanted to run, to feel the wind.
It was the most amazing feeling. Letting the horses break free, hearing Chandra’s calls, and enjoying the landscape with Dhaulagiri, 7th highest mountain in the world in the background. Racing each other. I was in a total state of bliss. I remember thinking I don’t think I could possibly be any happier right now. My whole face was smiling.

We finally made it to the village. Our horseman – kilometres behind us. One last run through the village before we arrived at the guesthouse. Back in the dining hall that night I couldn’t wait to share my day with the other guests. One of the best days of my life!

If you want to learn more about The Upper Mustang and the Khampa Warriors watch this excellent documentary that Al Jazeera television’s Steve Chao reported on his 2011 visit.

Annapurna Base Camp Trek, Nepal- Listener Questions-What's It Like?

Everest Base Camp-Getting Prepared For The Trek