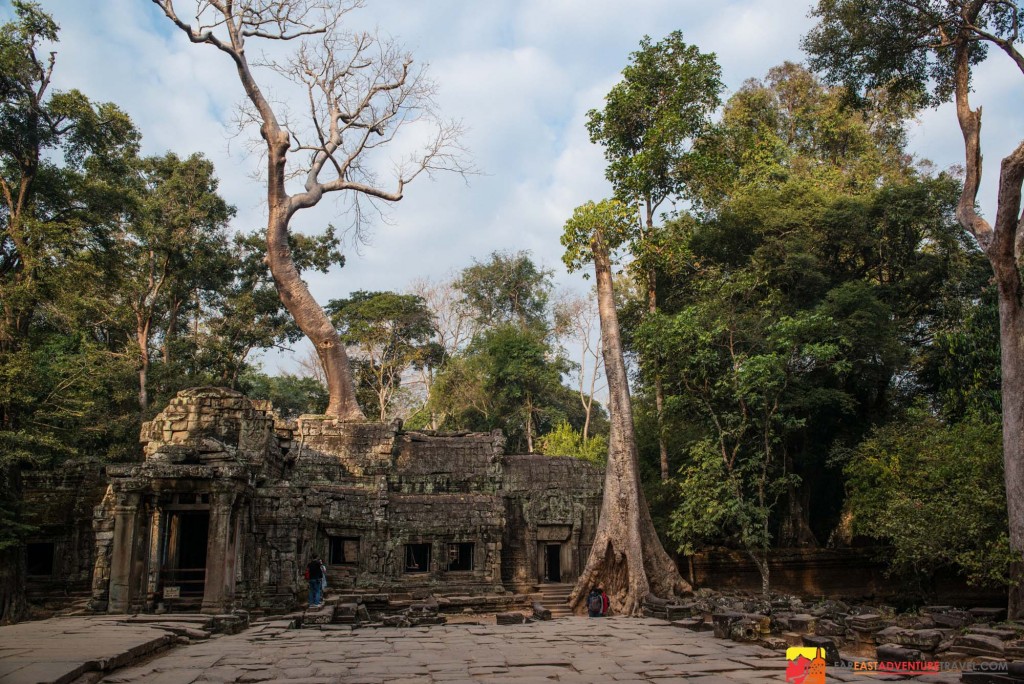 It was founded by the great Khmer King Jayavarman Vll in the late 12th century. It is one of the most visited sites in Cambodia’s Angkor ruins. This week’s Far East Adventure Travel Podcast, an early morning visit to Ta Prohm.

The crowds that visit Angkor Wat, Angkor Thom and the Angkor Ruins region can be overwhelming. Over 2.3 million people visited the site in 2014 making it one of the most popular tourist attractions in all of Southeast Asia. On my last visit I spent many early mornings wandering the ruins including visits to Ta Prohm, the temple complex made famous by the 2001 film Lara Croft Tomb Raider.

I was fascinated by the history of this temple, and OK maybe a little interested because of it’s film notoriety.

Ta Prohm was built in the late 12th and early 13th centuries in the Bayon Style which included face towers and naga carrying giant figures. Originally called Rajavihara it is located one kilometer east of Angkor Thom, the last great city of the Khmer Empire. King Jayavarman Vll who ruled the empire oversaw construction of Ta Prohm from Angkor Thom, where he ruled.

Ta Prohm had been left almost in the same condition as it was found, with huge trees growing out of the structures which have literally taken over the temple, one of it’s striking features. Don’t forget to look on the ground as there are many relics from the temple half buried under your path.

There is so much to see and absorb here. I enjoyed the piece of the early morning and my sense of the past was very real as I imagined monks, lamas and lay people coming for prayers and meditation over 700 hundred years ago.

Quite unlike regular hours at the various complexes where the crowds are everywhere fighting for space for photos and selfies.

Want to watch the sunrise with me at Angkor Wat? Great! Hope you don’t mind, I invited a couple of thousand of my friends to join us.

Is it worth it to wake up early with all of the craziness of the crowds? Of course, it’s Angkor Wat. It’s an amazing experience. Just be prepared for a little nonsense and sometimes rudeness with that many people gathered in one spot. Don’t get me wrong I’m not trying to be a downer. Just preparing you for what’s going to happen so you can adjust your expectations accordingly.

If I didn’t have proof you’d probably never believe me if I told you someone even brought a horse. Mind you this was sunset, a different crowd indeed.

Sunrise or sunset it is a must do when visiting the largest temple complex in the world. If you insist on getting a prime spot around the lotus pond leave your hotel or guesthouse in Siem Reap by 4-4:30am.

You know some don’t mind the crowds in fact they rather enjoy the whole experience. Well my friend what do you say have you had enough. Let’s head head back to the early morning visit of Ta Prohm.

There was almost a spooky sense here as well with the jungle birds chattering, the overgrown trees everywhere and the reminder of a once vibrant place. Walls decorated with jewels, spaces filled with people praying, dancing and a spiritual energy only to be replaced by debris, broken statues and the decay from hundreds of years of abandonment.

Some of these cotton, silk and ficus trees that have become an extension of Ta Prohm had to be removed in 2014. It’s likely that more will have to be eliminated in the future in order to preserve the temple. For now it’s still possible to imagine what it must have been like when the French explorers hacking away at the jungle with machetes discovered Ta Prohm in the late 19th century.

The temple’s records indicate that more than 12,500 people resided at Ta Prohm including 18 high priests and 615 dancers. Over 800,000 lived and worked nearby providing services and supplies to the temple. It was such a privilege and blessing to enjoy the peace and solitude of this once important spiritual center of the Khmer empire.

As the people started arriving it was time to leave taking with me incredible memories and some moments of deep connection with the past of Ta Prohm in the Angkor ruins of Cambodia.

That’s it for this week’s Far East Adventure Travel Podcast. Thanks so much for joining me. Until next time this is John Saboe, safe travels and Namaste!