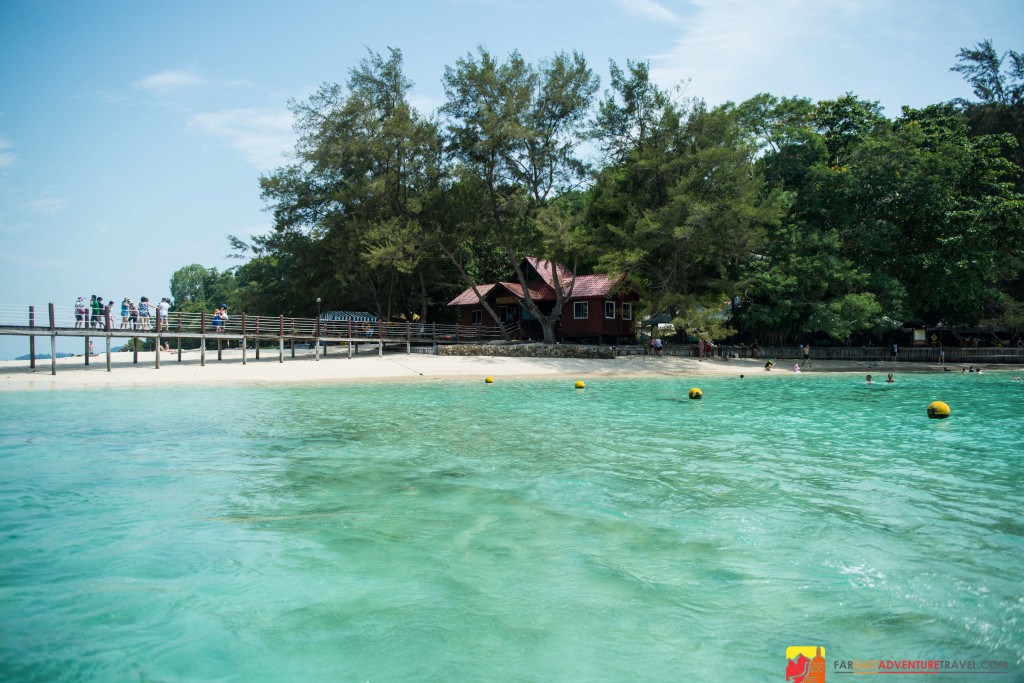 Pulau Sapi(Cow Island) whose inhabitants include a colony of monitor lizards is a 15 minute boat ride from Kota Kinabalu, Malaysian Borneo

Tunku Abdul Rahman National Park is made up of 5 small islands between 5-8 kilometers off of Kota Kinabalu in Sabah Malaysian Borneo. In this episode I’m heading for one of the smallest, Pulau Sapi, or Cow Island. It’s one of the least developed areas of the park. Great beaches, diving and snorkeling with a bonus chance of seeing some monitor lizards up close in the wild.

Sapi Island can be reached by boat from the Jesselton Point Ferry Terminal in KK. You can purchase a ticket directly to the island or get a multi-island ticket. This is a half-day or day trip for most. There are no hotels on Sapi but with prior permission from the park’s office you could camp there. Pulau Gaya, the largest island in the group at 3700 acres compared to Sapi at just 25 has resorts and more amenities.

This is one of the finest beaches in the park. I’ll spend a little time here but first I’ll do a quick hike around the island where I may see the lizards and some macaques. This is the map I had to work with, not exactly detailed but the island is only 25 acres. In the worst case I’ll just swim if I get lost on land.

Right out of the gate I get a quick glimpse of a monitor lizard but it quickly dashes into the forest. The trail that runs the perimeter of the island takes about 45 minutes to hike around with some nice little private beaches you can stop at along the way.

Here’s a pretty cool adventure. Take a boat to Pulau Gaya, then zipline to Pulau Sapi. You can reach speeds of up to 50km/hr on the 250 meter crossing of the two islands. It’s also possible to swim from island to island, but as there are no lifeguards there, do it at your own risk.

Back near the center of activity on Sapi close to the main beach and bbq area I found the biggest gathering of monitor lizards. These are actually water monitors, locally they’re called biawak. The males can reach up to 3 meters in length and weigh up to 50 kilos. They are very adept at swimming, and can stay underwater for up to a half-hour so watch out! You may see them catching a wave next to you.

Monitor lizards are more scavenger then predator so you probably won’t find them attacking people unless you get to close in their space, like some foolish tourists who try to include them in their selfie. These lizards carry a deadly bacteria in their mouth and their claws could tear a sizable chunk of flesh out of you so be careful. Monitors defend themselves with their tails, claws and jaws.

These lizards are carnivores and will eat birds, rodents, snakes, crabs and even carrion, similiar to their bigger cousin The Komodo Dragon. Their main hunting technique is to run after their prey once spotted. They also have an amazing one way breathing system that can be traced back to dinosaurs.

Pulau Sapi was a great half-day getaway from Kota Kinabalu and in between bigger Borneo trips. An easy boat ride gets you to a pretty nice spot for beach, relaxation, absorbing recent travel and cultural experiences, and even a little exotic animal viewing.

It’s back on the boat to KK and more adventure in Malaysian Borneo with Far East Adventure Travel The Podcast, I’m John Saboe. Thanks for joining me, safe travels and Namaste!

A monitor lizard looks for food near the bbq pit on Pulau Sapi(Cow Island), Malaysian Borneo