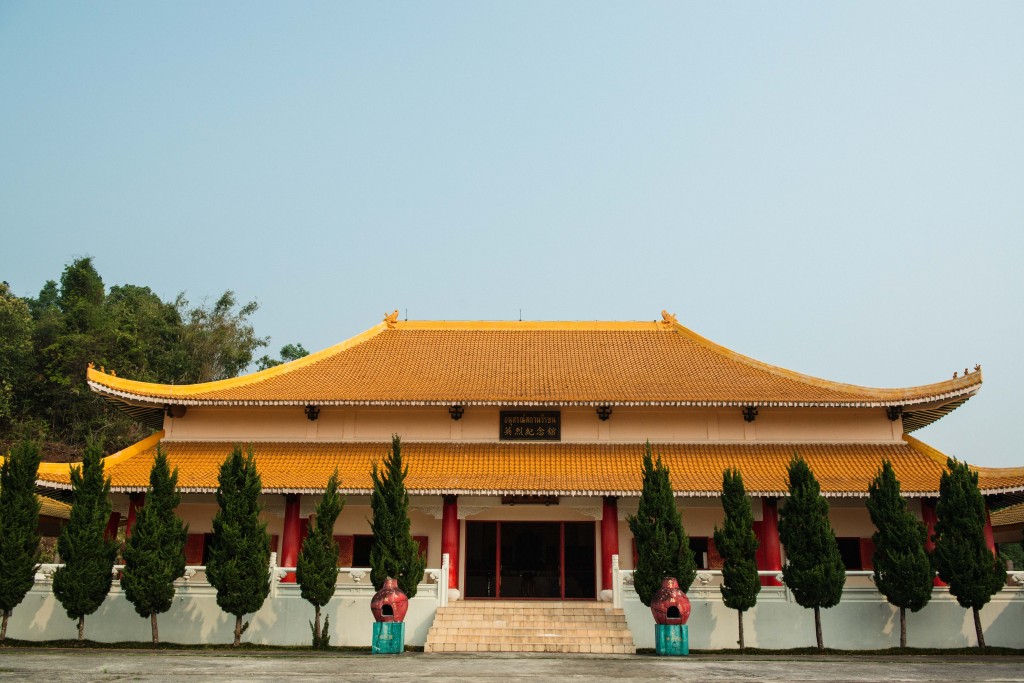 The Martyr’s Memorial Hall in Mae Salong, Thailand dedicated to resident KMT soldiers who died in battle fighting the civil war of China and communist insurgents in Northern Thailand

In Northern Thailand 15km away from the border of Myanmar lies Santikhiri, otherwise known as Mae Salong. It’s history was in part formed by the opium trade as part of the Golden Triangle. More recently it was settled by members of the 93rd division of the Chinese Nationalist Army who refused to surrender to communist China when they were defeated by Mao’s army in 1949.

At first their force of 12,000 from Yunnan province fought from Burma. Later Mae Salong was settled. It was to be a base for an eventual counter-attack against Communist China, supported by Taiwan where most of the Kuomintang Nationalists had fled, and the United States.

When diplomatic ties between Communist China and Burma changed, along with less interest on the part of the U.S. to support the Nationalist fighters the soldiers that settled in Mae Salong turned to opium production to fund arms.

By the 1970’s the Thai government struck a deal with the nationalist soldiers. In return for helping the government fight off their own communist insurgents they would receive Thai citizenship. Their deal would eventually include giving up their opium ties for a legitimate business, Oolong tea production, today Mae Salong’s number one business. The first bushes were imported from Taiwan.

The Martyr’s Memorial Hall or Shrine in Mae Salong pays tribute to the Kuomintang settlers who fought battles against the People’s Republic of China, and helped the Thai government defeat communist insurgents in Northern Thailand. All of the division KMT soldiers killed in battle are listed in the memorial.

Mae Salong is also home to hill tribes, mainly the Akha, who follow animist beliefs and rituals. The Akha came to Thailand in the early 20th century after suffering persecution in Burma. Today, Akha and other hill tribes people can still be seen wearing their traditional clothing in the village while selling their wares or produce. Mostly now the colorful clothing and headdress is only worn during festivals and celebrations.

Although many of the KMT’s descendants have adopted a Thai identity, Yunnanese or Mandarin is still the main language spoken in the town. Restaurants and guesthouses feature noodle dishes and other Yunnan specialities, and the aroma of tea is everywhere.

On the surface a simple looking Thai village in the far northern reaches of the country. Open up it’s past and the culture, history and people of Mae Salong and their struggle to build a new life are only then truly appreciated. For Far East Adventure Travel, I’m John Saboe.