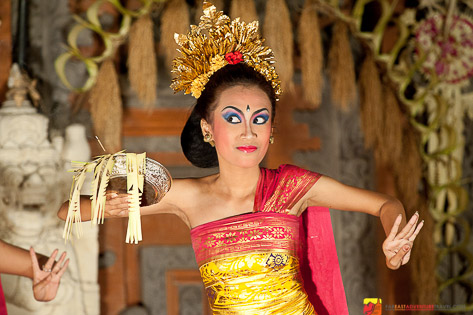 Magical Nights
Once you’ve been to Bali, specifically Ubud, you’ll never forget your evening walks. The tropical air, warm and humid. The stars viewed from the Southern Hemisphere and the sounds of the Gamelin. The Balinese musical ensemble that plays for the various dance performances every night. The moments are pure magic. Hot tropical starry nights. The erie sounds of the xylophones, flutes, drums and metallophones. They can be heard almost anywhere around the town of Ubud. There’s usually a few performances going on every night. 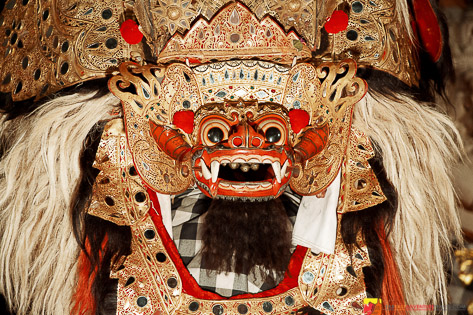 The Barong “lion-like” creature at The Royal Palace Ubud

So when people ask me where they should stay when they go to Bali I always tell them to spend at least a few nights in Ubud. Yes there are the tour buses, the souvenir shops. The taxi drivers everywhere. “Taxi? Taxi?” I stopped and asked a few drivers one day how many times they have to say “taxi? taxi?”, before they get a fare. “About 50 times”. But for the enchanting evenings and the shows I’d brave it anytime. With all the venues around town you can take in a different performance every night. 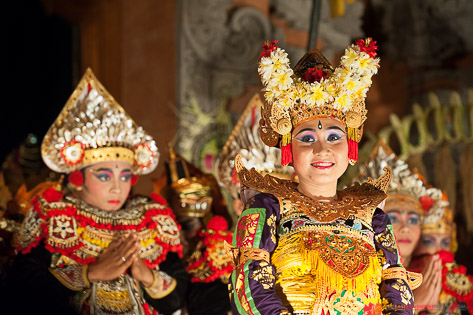 The Dances
The three main categories or styles of Balinese dance are Berong, Legong, and Kecak. You don’t need to remember too much about the specifics of each one. Barong features a lion like creature. Legong uses very young girls in the performance, and Kecak, the most exciting one features chants and a fire walk/dance. The first two feature the famous eye, hand and body movements. If you’re like me the first time you see the ladies reverse eye direction you’ll get chills.

Just remember the three names. This will help you to avoid duplicating a performance. Unless you want to see one twice, performed by a different group. Which is possible with the numerous venues and dance groups in town. 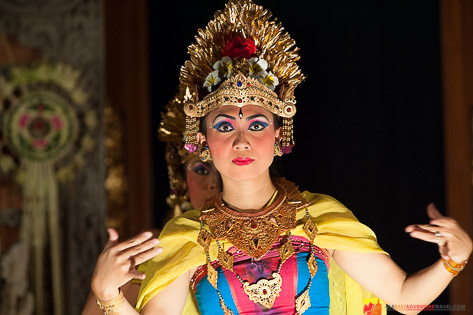 The Puppet Shows
I would also highly recommend taking in a puppet show. This is not the muppet kind of puppet. They are intricately designed shadow puppets. The puppets and puppet show are sometimes referred to as Wayang Kulit. The shadow artist performs with the puppets moving them against a flame to create shadows. They will also voice the characters accompanied by a Gamelin, a smaller version of the band that accompanies the dances.

The artist that performed the show I saw one night in Ubud was super talented. The plays are always acted in Balinese Hindu. But during the breaks he performed little vignettes in English about taxi drivers charging too much for fares and other tourist experiences. It was hilarious. 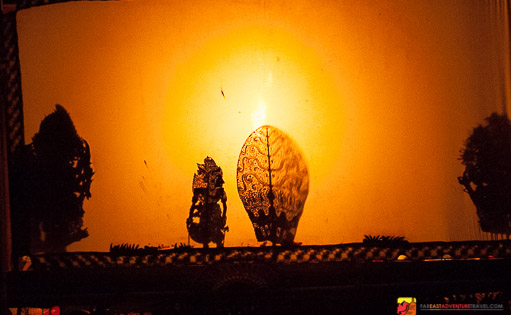 The last show I saw during my stay was The Kecak Dance featuring a chorus of men chanting “cak” in place of a Gamelin. I really wasn’t prepared for the finale. A couple of men start stoking the fire with coconut husks creating hot coals and embers. Finally the fire dance trance. A man appearing to be riding a ceremonial straw horse proceeds to dance over the fire kicking the embers forcefully before walking away like he’d just ended a work day. Just to show this was everyday business he put his feet on display for everyone to see the lack of charred skin or even blisters. It was a great ending to my stay. And no I don’t need a taxi, but thanks! 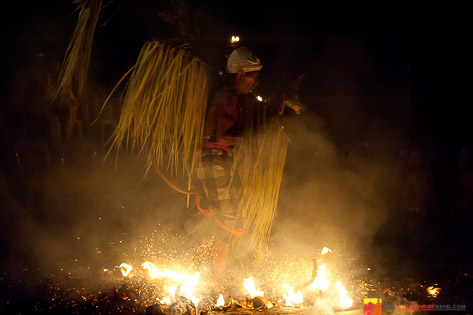 Travel Advice:Tickets for the shows are available all day long and right up to performance time. There are ticket sellers all over town on the street. Don’t worry about commissions or paying more then at the booth or somewhere else. The ticket prices are exactly the same wherever you purchase them. I’d recommend taking in at least one show at the Royal Palace in Ubud as the quality of performance is quite high. The Kecak Dance will not be performed on a stage so there will likely be no covered area. Usually the first row or two is reserved for tour groups so arrive at least 30 to 45 minutes ahead of time for a good seat.