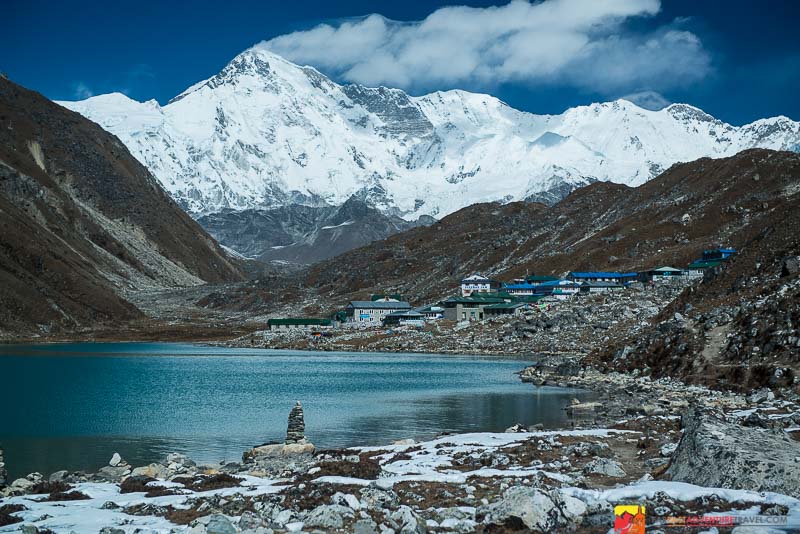 Cho Oyu, the 6th highest mountain in the world towers over Gokyo village- boasting some of the best views in Nepal’s Himalaya

Hi this is John Saboe, the publisher of Far East Adventure Travel Magazine and in this week’s episode of the podcast-the mysterious Gokyo Valley of the Khumbu region of Nepal.

The Gokyo Valley is a great alternative or add on to the standard Everest Base Camp Trek. Quieter trails, and spectacular views even of Mt. Everest.

Gokyo is reached by walking the same trail towards EBC, following a two night stay in Namche Bazaar for rest and mostly acclimatization.
It’s not long out of Namche before you take the turn for Gokyo at Sanasa.

It feels like you’ve left a freeway for a country road especially if you do this in October. The trails are quieter, the views, are absolutely spectacular and it feels a little more relaxed and almost subdued, compared with the main path to Everest Base Camp. 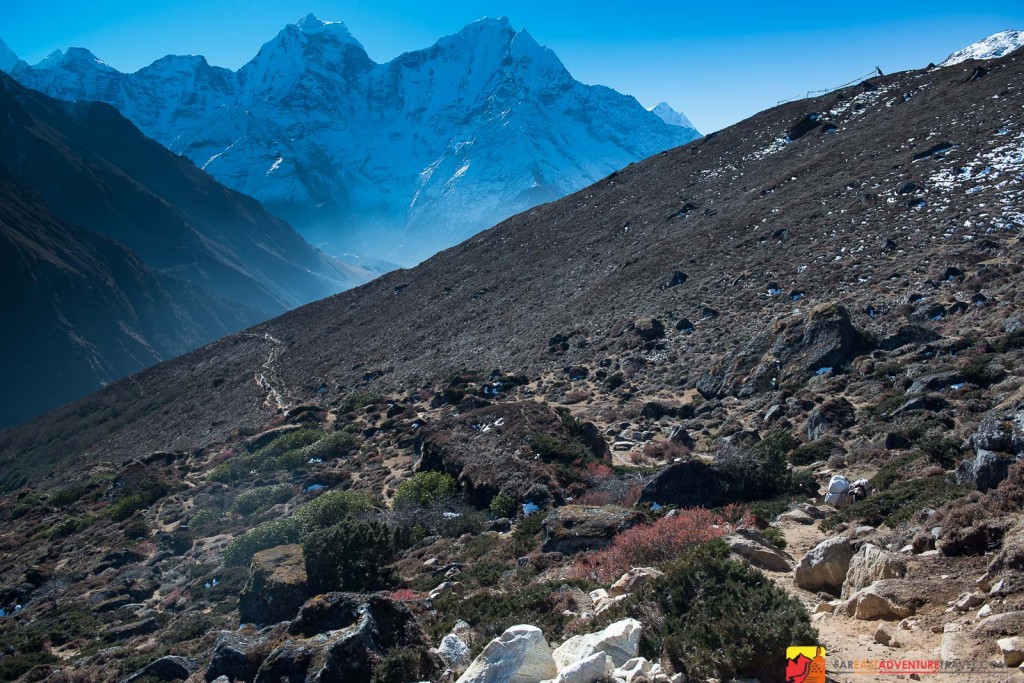 The views of Everest, Lhotse, and Aba Dablam, on the busy trails just before the path that leads to The Gokyo Valley.

Right away you’ll notice the big groups marching up to EBC on a tight itinerary are missing. The yak and horse traffic that moves with them drops off as well, allowing for more time to take in the views. It’s a relief not worrying that a yak is going to take you off the trail with one swipe of it’s head and horns.

The first settlement or stop is Mong La. Mong La affords you one of the best views of Aba Dablam, many agree one of the most beautiful peaks in the Khumbu Valley.

The trail then takes you through mixed forest and rhododendron, and a chance at spotting wildlife. Like these blue sheep maybe or a lone musk deer.

A yak takes a break before another climb up a steep section of the trail.

The clouds filled the afternoon skies shutting out the amazing views before we arrived in Dole, our first stop for the night in the Gokyo Valley.

The next morning we left before 8 giving us plenty of time to reach our next stop, Machermo in time for lunch.

After an afternoon of cloudy skies with little or no opportunity to see much of the landscape the clear skies of the morning felt like the valley was finally unveiled to us in all it’s majesty.

Cho Oyu, the 6th highest mountain in the world at 8201 meters. Cho Oyu means turquoise goddess in Tibetan. It was a sign we were nearing the Nepal Tibet border and getting deeper into this remote region of Nepal.

After 3 hours of trekking we finally reached Machermo, elevation 4470 meters. Machermo the mountain, towers over the area and is considered a trekking peak but with technical rock climbing. With Machermo’s wraparound views it’s the first time I felt like I was truly in the high Himalaya in this region.

Machermo like other villages in the valley mostly function as stops for trekkers with guesthouses, but little or no village life.

There is a very informative free lecture on mountain sickness every afternoon at Machermo’s hospital usually given by a volunteer doctor. For a small donation they will also take a reading of your blood/oxygen saturation level to see how your body is acclimating to the altitude.

The next day we got our first look at the pristine turquoise lakes of the Gokyo Valley. This is the highest freshwater lake system in the world. It’s comprised of 6 main lakes with a total of 19 spread out over 197 hectares at elevations ranging from 4600 to 5100 meters.

The trek from Machermo to Gokyo, our next stop was just over 3.5 hours.

I loved the Khumbu Valley and Everest region but the Gokyo Valley felt hidden, somehow untouched, probably due to it’s remoteness, lack of a crown jewel of bucket list activities, and the extra time it takes to get there.

Gokyo, the trekking village that sits at the eastern end of Gokyo Cho, the main lake of the freshwater lake system and below Cho Oyo, the 6th highest mountain in the world.

With plenty of time to settle in have lunch and tea I took a walk afterward around the village and lake. I also wanted to get closer to Cho Oyu- which felt like a giant white wall dividing Nepal and Tibet.

When ever I’m in the high Himalaya I often think about how fragile we are up here, how little if no control we have over events. Even just trekking, how close we could be to a disaster.

In 1995 this area saw one of the worst trekking accidents of all time when more than 60 people were killed due to a storm and subsequent avalanche.

I looked up at Gokyo Ri-at 5357 meters it’s one of the highest points you can trek to in the region with some of the best views of the Himalaya in Nepal. This is one of the best viewing spots of the valley. On a good day you can see 5 8000 meter peaks. We would start our ascent at 4:30 the next morning-in time for sunrise.

Our hopes for clear skies looked promising. When we finally reached the summit of Gokyo Ri clouds had rolled in quickly, as they often do here covering many of the peaks, including Mt. Everest, in the center of our view.

Within a few minutes some of it’s anvil shaped summit was starting to make an appearance.

You just never know how things are going to play out. If you get a clear day you’re blessed. I’ve just learned never to expect it. Sitting on top of a hill that’s over 5300 meters high in remote Nepal overlooking the Himalaya is enough to fill my heart with joy. Lao Tzu once said “A good traveler has no fixed plans, and is not intent on arriving.”

Before out descent one last look at the Ngozumpa Glacier, at 22 miles or 36 kilometres it’s the longest glacier in the Himalaya.

As we made our way down Gokyo Ri Mt. Everest’s distinct black pyramid summit made a brief appearance. Just for a few seconds….It was magic in the sky…..

Until next time, this is John Saboe, thanks for joining me-safe travels and Namaste!