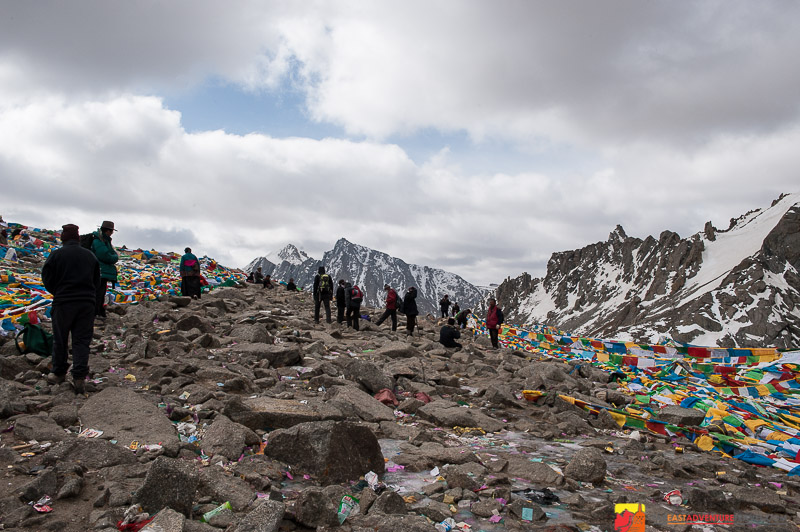 The Dromla La Pass at 5630 meters is the highest point of the kora of Mt. Kailash

This is John Saboe the publisher of Far East Adventure Travel Magazine and in this episode a journey to one of the greatest pilgrimages on the planet. Mt. Kailash, Tibet.

I got a message on FB the other night from my friend Hari who is from Kathmandu, Nepal. He guided me through the Kanchenjunga region of Nepal last year and he was dropping me a line from Darchen, Tibet which is the little town that is at the start of a Kora or circumabulation around Mt. Kailash in the far western region. He was guiding a large group to the start of the 3 day trek and he was helping to prepare food for over 20 people. A big job and I said to him that I would be happy to help out. Anything to get me back to this magical place in the middle of nowhere. One of the most remote spots on the planet.

Mt. Kailash is located in Western Tibet. It is considered by many to be the center of the universe in Buddhism. Hindus believe it is where Lord Shiva presides with his wife Parvati. The Jains and the ancient Bon religion also believe it to be a holy place and an important pilgrimage.

A kora, is a circumabulation, a complete circle or walk around the mountain, a total of 52 kilometers.. For most a kora of Mt. Kailash will take 3 days total. Some pilgrims will do it in 15 hours, which is very difficult and unless you are well acclimated and in top shape I highly recommend you take the usual 3 day journey around the mountain. This is a high altitude trek. Some pilgrims will prostrate the whole way. This is the act of kneeling bowing your head down and moving your hands from a folded position raised to your forehead then sliding your arms and hands to the ground in front of you. This can take up to 4 weeks to complete a kora in this fashion.

The village of Darchen technically the start and finish of the kora sits at 4575 meters. The highest point of the trek the Dromla la pass is 5630 high, only 265 meters less than the summit of Mt. Kilimanjaro in Africa. A few days in Lhasa at 3650 will help you acclimate as well as the days on the road to Mt. Kailash.

You are on the roof of the world so the minute you touchdown in Tibet you are at high altitude. Your reward for walking a kora of Mt. Kailash, your sins will be completely wiped out. You will also see some of the most spectacular mountains, temples, and hear fascinating Buddhist and Hindu legends. It is walked in a clockwise position by Buddhists and Hindus. Jains and Bons will do the kora counterclockwise.

Trips to Mt. Kailash can be arranged through various tour operators in Lhasa, Tibet and Kathmandu, Nepal as well as international tour companies. The Chinese government changes the rules for travel through the Tibet Autonomous Region periodically and sometimes denies permits altogether.

In my research it currently appears that most nationals from countries, with the exception of Norway, can obtain a permit for travel in this region but you must be in a group of at least three from the same country. I understand for travel through the rest of Tibet this is not necessary but for Western Tibet and the Mt. Kailash region it is. Possibly because this is an auspicious year for Koras and visits to Mt. Kailash.

Milarepa, the celebrated Buddhist yogi and poet is said to have rode to the top of Mt. Kailash on the rays of the sun had once declared that a visit and subsequent kora during the year of the horse would bring 10 times the luck of a regular year. This is the year of the horse so this indeed is a busy year for Kailash and possibly a reason for the extra travel conditions.

Independent travel of any kind in Tibet is not allowed so travel permits must be arranged in advance through a tour operator or agent. If you are thinking of going do not hesitate. The Chinese government never closes Tibet but they will stop issuing permits- sometimes on a moment’s notice. Or they will change the conditions,. Up until recently you were not allowed into the region unless you were with a group of a minimum 5 fellow nationals.

Why go? From my personal experience this is a one of a kind journey. It is one of the remotest spots on earth. Traveling overland is currently the only option for getting to Mt. Kailash. Accommodations can be limited and sometimes uncomfortable, especially the toilets, or outhouses. But you will see a part of the world that few see. You will meet Tibetan Buddhists, Hindus from India and Nepal and the rest of the world all on this very important pilgrimage that if it has the same effect on you as it’s had on me, will be life changing.

The night before we would reach the highest point of the kora of Mt. Kailash my guide, Norbu and I settled into of the tents that catered to local pilgrims for something to eat and some tea. We found a spot near the back next to a couple from Shigatse, the second largest city in Tibet. They were dressed in traditional clothing of the region and wore beads of turquoise and silver bracelets. Norbu translated and the usual curious questions of where I came from were answered. At one point the man asked me if I had some heart medicine I could give him. Most would find this odd, but it is a typical question for a Westerner in this part of the world. Many lack the medicine required for their ailments and as a Westerner you are viewed upon as a resource for modern things including medicine.

We ordered some noodles, the packaged kind that are pretty much the only available food on the kora of Mt. Kailash. Tea was quickly served to us.

After dinner we made our way down a hill towards the guesthouse. There are no trees here and little or no outhouses so people tend to be on the humble side when it comes to relieving themselves. As we walked down the trail one after another we saw pants or skirts dropping and squatting, after the fifth time it Norbu suggested we change direction.

After a slightly restless sleep I was awake and ready to complete the kora. We also decided that we would complete the remainder of the kora on day 2 rather than stretching it out over the normal 3 days. It would make for a very long day, over 10 hours, but the reward would be a night in a better guesthouse in Darchen, and some home cooked Tibetan food for dinner, oh and Lhasa beer.

We left the guesthouse on time and started the slow climb up the pass. As we moved up higher we saw little flakes of snow falling. Barely a dusting but it was new snow-in June. Then we saw the charnel grounds. The place where pilgrims leave clothing from their dead relatives in order to confront and realize the transient nature of life. Clothing of all kinds, shapes and colours. In the middle of all of this was an elderly man sitting cross-legged. He was ringing a bell, playing a small drum and chanting. Norbu said he was a hermit who lived in cave nearby. He had come to pray for the dead.

We moved further up and higher, my breathing became faster and heavier as the density of oxygen in the air decreased. I looked behind me and saw the trail where we had come from with a large line of people heading towards us. Many pilgrims, and caravans of yaks with their yak herders, carrying supplies for many of the big trekking groups that were here. I met someone from South Africa, another man from Nepal. There was a small group from India that were on the ultimate Hindu pilgrimage, a kora around Mt. Kailash on horseback.

We finally arrived at The Dromla la Pass. The pinnacle of the trek. It is the highest point you reach around Mt. Kailash and many had stopped to celebrate, pray, and take pictures. The yak caravans arrived, the bells around the yaks necks were clanging as the prayers or chants became louder, incense was burning everywhere and a spirit was alive and an atmosphere I never seen or experienced in my life. I would reflect later that this was the spiritual high of my journey through Tibet.

Go to breezy-size.flywheelsites.com to see and hear more about Mt. Kailash, including images and video from my last visit there. Read all about camel trekking in The Thar Desert of India in the latest issue of Far East Adventure Travel Magazine on the iTunes Newstand. Also Kagbeni, Nepal, the crossroads to the Upper Mustang and The Annapurna Circuit. Just go to the app store-search far east adventure travel, download the app and subscribe. Or go to breezy-size.flywheelsites.com, click on the app store icon and subscribe.

That’s it for this week’s edition of Far East Adventure Travel-The Podcast, thanks so much for listening. Until next time this is John Saboe, Namaste and safe travels! 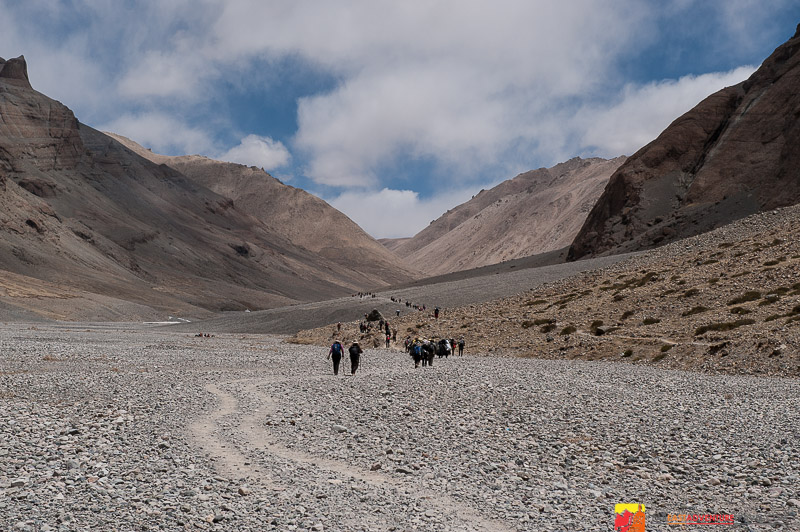 On the kora of Mt. Kailash – Tibet