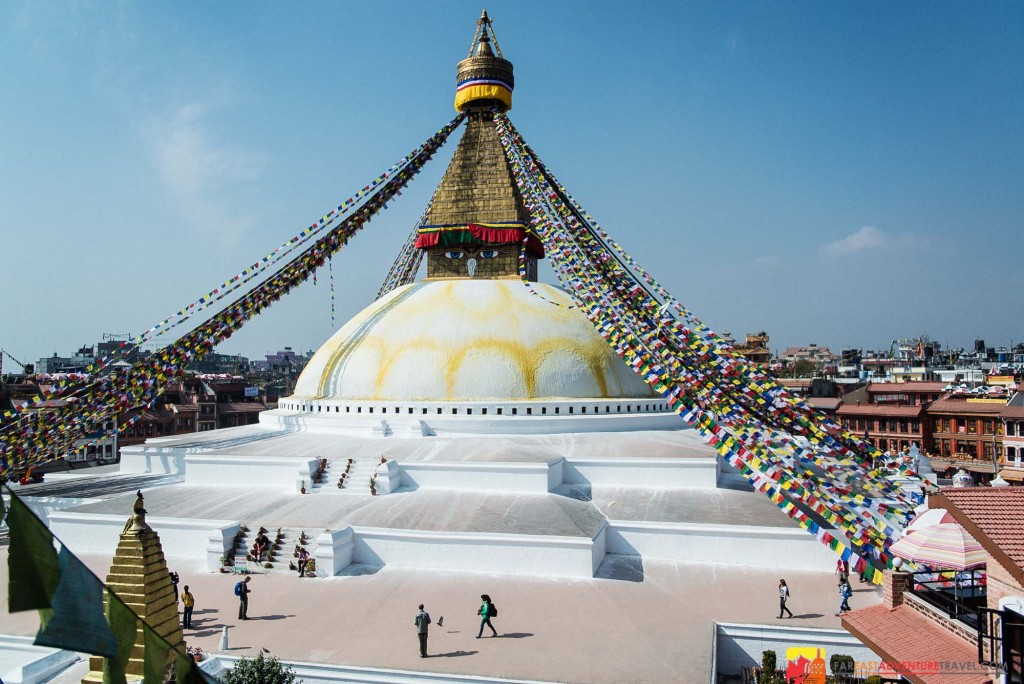 Boudhanath- the largest Buddhist stupa in Nepal has been visited by Buddhists for hundreds of years
Boudhanath is one place you cannot miss when you visit Nepal. The huge white stupa is one of the largest in the world. It has an incredible history dating back to at least the 8th century. This stupa is located on the old trade route from Tibet which came into the valley via Sankhu village, now about a 45 minute car ride from Boudhanath. Many Tibetan merchants have rested and offered prayers here for hundreds of years. In the 1950’s when Tibetan refugees entered Nepal they decided to live around Boudhanath.

Today there are over 50 Gompas or Buddhist monasteries in the village. Two large earthquakes one registering 7.8 magnitude, the other 7.3 had preceeded my visit in May 2015. Neither had any serious effect or damage on the main stupa. Some in the village attribute the power of Lord Buddha himself for it’s relatively untarnished structure in the wake of the devastating earthquakes.

Stupas are defined as large mound objects that contain the relics of former Buddhist monks and nuns. Boudhanath stupa is said to contain the remains of Kassapa Buddha, a disciple of Guatama Buddha.

Tibetan Buddhists will circumambulate, which literally means “walk around”, the stupa in a clockwise direction while chanting a mantra, quite often Ohm Mani Padme Hum. Malas, strings of a 108 beads are carried, each one counted so as to complete 108 chants, an auspicious number in Buddhism. There are 147 prayer wheels around the perimeter of the stupa. Prayer wheels are spun for good kharma, many of them with the inscription Ohm Mani Padme Hum.

Boudhanath as with all Buddhist stupas is filled with symbolism, and numbers play an important role. There are the 13 pinacles at the top of the giant stupa, symbols of the 13 steps to enlightenment or Buddhahood. There are 5 Buddhas represented in the architecture of the stupa, 4 at the cardinal points and the 5th enshrined in the center. The 5 Buddhas also embody the 5 elements-earth, wind, fire, water and ether.

At the time of documenting Boudhanath for this podcast repairs were being completed on the walkway around the stupa, so there was a slight detour through an alley in the village in order to complete the kora around the stupa. As I passed through this part of the village lamas and monks were preparing for their afternoon meditation and chants. Walking through the village with Tibetan Buddhists, while the drums sounded from the monasteries was enchanting and inspirational.

I was almost finished my kora but there was one last stop to make. To see this pilgrim that busks his throat singing or chanting.

Another kora completed at Boudhanath the Tibetan Village. The earthquakes left some damage behind, a small stupa that crumbled, a crack in the large one but little else and only a stronger belief for those who live and worship here in the three jewels or gems. The Buddha, The Dharma, teachings of the Buddha, and the Sangha, the community of practising Buddhists.

As the workers completed the repairs to the walkway the pilgrims carried on as they have for hundreds of years at one of the most important Buddhist pilgrimages in the world-Boudhanath. As The Buddha himself once said, “No matter how hard the past, you can always begin again.”