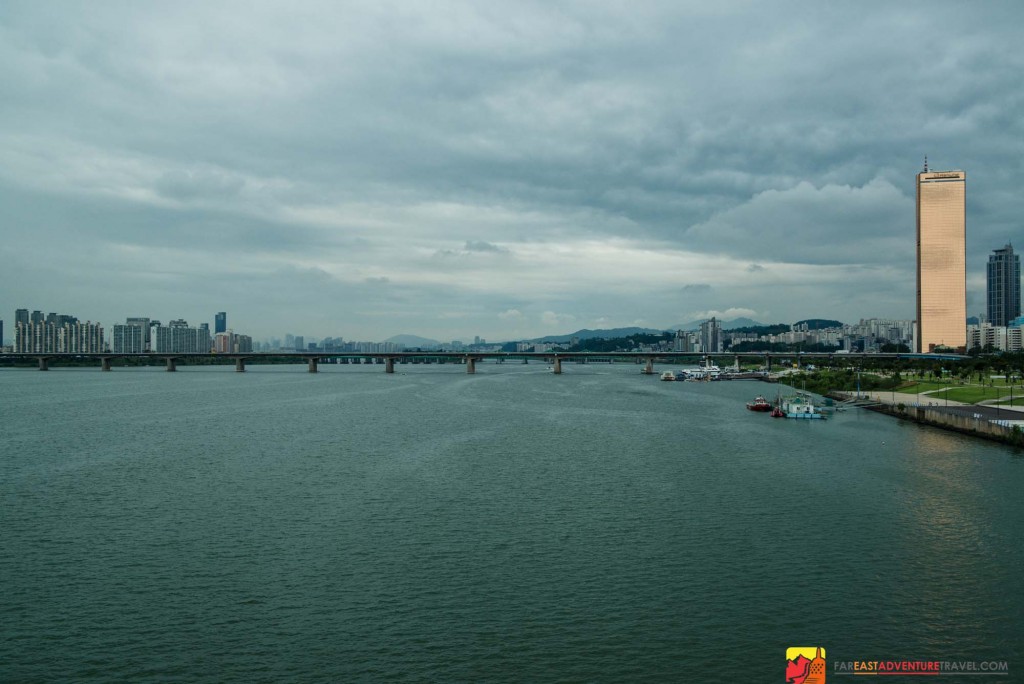 View of the Han River from the Mapo Bridge in Seoul, South Korea – this area is a top cycling spot in the city with designated cycle paths and convenient stops

Can’t think of a better thing to do when hanging out in a super modern city like Seoul, South Korea then to go for a bike ride. It’s a great way to see another side of life here besides the typical tourist things like visiting temples, museums and going shopping plus it’s so up close to everyday life here.

I actually got my idea for this ride from the latest Lonely Planet Korea guide with a few modifications to the route. Let’s call them accidental modifications. I started out from Yeouido Park where you can rent bikes starting at 3000 won an hour, about $2.50 USD. Yeouido is considered the mecca for cycling in Seoul.

First stop was the Mapo Bridge where there is a designated cycle path making it safe and convenient to check out the views.

The Han River is the fourth longest river on the Korean Peninsula with a total length of almost 500km. This river was once a very large trade route with China through the Yellow Sea however due to estuary location at the borders of North and South Korea the river is no longer actively used for navigation.

An exit ramp from the other side of the bridge takes you to the north side of the river with great cycling paths. Keeping to the left on this path will continue your journey along the Han River. The destination for this cycle is the Seoul World Cup Stadium, built for the FIFA World Cup in 2002.

A great view of the beautiful domed National Assembly Building across the river. the legislative branch of the South Korean national government.

Keep riding along the path past this cliff and under the Yanghwa and Seongsan Bridges.

OK I’m getting my second win, coming up on you so watch out, OK maybe not. Oh God this reminds me of the night before, did I really drink that much?

Here’s where you need to make a right turn just past this bridge that crosses the stream. Up hill for a few minutes through a parking lot and I arrived at my destination.

What a great time riding in the urban megalopolis of Seoul, South Korea. I found cycling around the Han River a perfect alternative to the usual tourist fare and at the least it can be something you can do to break up the temple hopping and shopping or help recover from a late night.

Was that a yawn? Sounds like a nap is in order after something to eat. A couple of stops along the Seogang Bridge to take one last look at the view over the Han River.

I always find cycling at any destination is the quickest way to get up close to everyday life and culture I feel even in an urban landscape it’s possible to keep the outdoor adventure alive. Grab a bike and hit the road next time you’re in a big Asian city like Seoul. You’ll feel completely re-energized and up for more adventure. Now I’ve got to get back before it starts to rain.