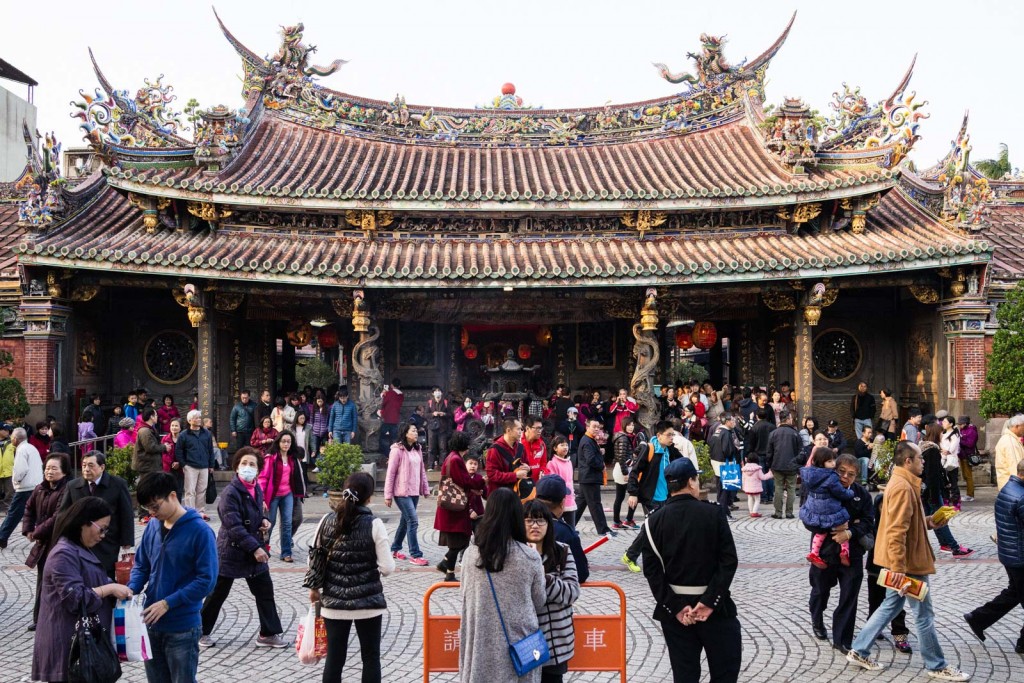 The Baoan Temple in the Dalongdong neighborhood of Taipei, one the many sites to enjoy along the Red Line of the city’s MRT system

Taipei’s MRT System is super efficient and very easy to get around on with all stops and information in English. If you’re staying in Taipei for more than a day make sure you get an Easy Card pass from the vending machines at all stops or pick-up a 1,2,3 or 5 day Taipei Pass at information counters.

In this podcast we will make 3 stops on Taipei’s MRT Red Line. First from Main Station we’ll head for Yuanshan stop and the Dalongdong neighborhood.

Next a ride all the way to the end of the line at Xiangshan for a hike up Elephant Mountain. Then back to finish off the afternoon at Liberty Square and the final Honor guard of the day at Chiang Kai-Shek Memorial Hall.

Yuanshan is the first elevated stop on the red line that finishes in the riverside village of Danshui. All stops before Yuanshan are underground.

This is the old Dalongdong neighborhood with many historic buildings and quiet lanes to explore. Our destination here is the Confucius Temple and the Baoan Temple. Like most sites in Taipei there are English signs everywhere leading you in the right direction whether you look up or down.

Confucius was a Chinese teacher, philosopher, editor and politician born in 551 B.C. Confucius was a champion of strong family loyalty, respect of ancestors, and respect of elders by their children among other things.

Confuciunism is said to have played a big role in the successful economies of the 4 Asian Tigers. Hong Kong, Singapore, South Korea and Taiwan all have had educational programs that taught the values of Confucius-hard work, respect, loyalty, and respect towards authority figures.

Taipei’s Confucius Temple was first built in 1884. During the Japanese Occupation starting in 1894 the military took over the temple eventually tearing it down in 1907 to build the Taipei First Girls High School.

In 1928 a group of businessmen starting collecting donations and by 1930 the first buildings of the complex were finished and for the first time in 30 years the birthday of Confucius was celebrated in Taipei.

There are many signs in English throughout the complex and a free English brochure available at the information desk.

This is a lovely complex to relax from the busy city and even meditate if you wish. The busiest day the temple sees is usually the Confucius birthday celebrations.

Just around the corner the Baoan Temple is one of the most beautiful examples of a traditional folk religion temple in Taiwan. Construction was completed in 1830 and since then the temple has undergone many renovations.

The Baosheng Emperor or Medicine God is the main deity of the temple. His birthday is one of the biggest celebrations in the neighborhood. A parade is held on the 14 day of the 3rd moon in the Lunar Year. The parade route includes the whole neighborhoods of Dalongdong and Dadaocheng.

There are many decorative arts located around the temple from wood and stone carvings to clay sculpture and koji pottery.

The Bao An Temple still upholds many of the traditional rituals of Taiwan temples including incense burning, to help communicate with the Gods, and food offerings.

After visiting the temples a stroll around the neighborhood where some of the oldest buildings in the city are located. There’s a night market that starts here in the late afternoon. Traffic continues during the night market so be careful.

Back on the MRT Red Line to go all the way to the end and the Xiangshan stop for a hike up Elephant Mountain. Xiang, means elephant in Mandarin, shan, is mountain.

As you leave Exit 2 signs lead you to the start of the stairs that take you to the top. You can hike at a leisurely pace as this is not a long walk. Average time is about 15 minutes to the stairs and another 15-20 minutes to get to the highest lookout point.

The stairs take you past a temple through a lush tropical forest with some rest stops along the way. The first lookout point gives you an upfront view of Taipei 101. For 6 years from 2004-2010 Taipei 101 was the highest building in the world. You can stop here but it’s only a few minutes more of hiking to get one of the most spectacular views of Taipei.

These giant rocks are a sign you are near the observation deck at the highest viewpoint of Elephant Mountain. If you like you can switch this tour around to watch the sunset from here but it does get crowded being a top spot for photographers.

This is the classic picture of Taipei you may have seen before in travel ads. Taipei is located on the Taipei Basin, an ancient lakebed . It is the political, economic, educational and cultural capital of Taiwan. Taipei City’s current population is over 2.7 million.

If New Taipei, the surrounding area around Taipei city is included the total population rises to over 6.6 million. On a clear day you can see all the way to the spot where the Danshui River flows into the Taiwan Strait.

One of the many things that makes walking around Taipei a unique and special experience are these random forms of traditional entertainment you’ll see at a moment’s notice. Sometimes you’ll run into a Chinese opera being performed, as in this case a traditional puppet show.

Back on the MRT to Chiang Kai Shek Memorial Hall and the last stop on this red line tour for the day.

This is the National Concert Hall where local and international entertainers perform everything from classical to jazz.

The National Theater Hall where plays, musicals and dance performances are held. Both the National Concert Hall and Theatre were completed in 1987. Both twin halls can host two events simultaneously.

This is the gate of integrity, the main entrance to Liberty Square, The National Concert and Theater Halls and Chiang Kai Shek Memorial Hall.

This square was originally named Chiang Kai-shek Square but was later changed to Liberty or Freedom Square after political demonstrations held here in the early 90’s facilitated the transition from a one party rule to modern democracy.

The first structure to be built on this site was Chiang Kaihe-shek Memorial Hall, completed in 1980. Dedicated to Chiang Kai-shek who was the leader of the Republic of China from 1928 until his death in 1975.

Chiang Kai-shek’s Koumintang army fought and lost the civil war in Mainland China fleeing to Taiwan in 1949 to maintain the Republic of China government. His intent was to eventually take back the mainland. The 6.3 meter statue of him faces west in the direction of China.

An honor guard stands on duty at the memorial everyday. They are represented by each arm of the Republic of China’s forces, the army in green uniform, the navy wears black in summer, white in winter currently on duty and the air force in blue. The forces rotate every four months.

The Honor guard that stands duty at the memorial changes hourly with the final shift at 5pm on most days followed by the lowering of the flag in the square at 5:10.

A display of Taiwan’s impressive precision honor guard with a beautiful backdrop of gardens and spectacular East Asian architecture is sublime and a perfect way to end the day in Taipei, Taiwan.