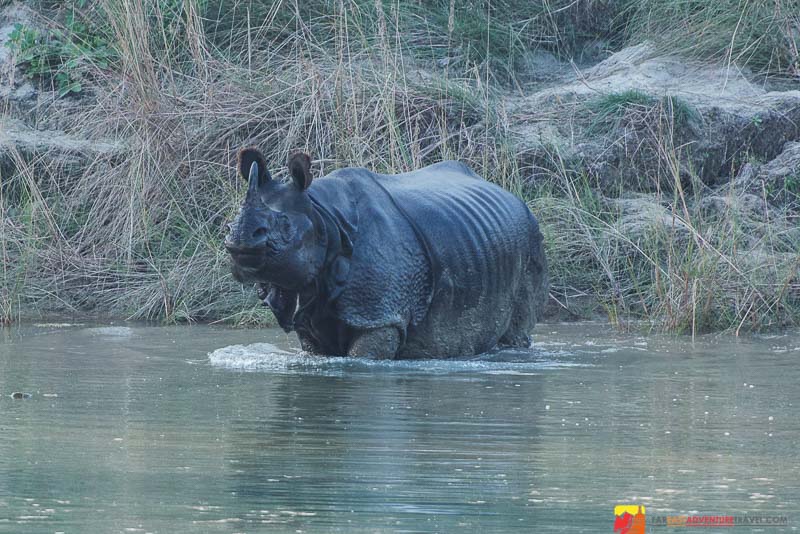 A close encounter with a greater one-horned rhino in Bardia National Park, Nepal

I’ve been very fortunate to have some pretty interesting experiences spotting wildlife but none as great as a recent visit to Nepal’s Bardia National Park located in the southwestern region of the country.

In terms of transportation this area is considered remote. The closest airport is approximately a 2.5-3 hour drive by 4×4 to the park entrance. The flight compared with other regions is expensive costing as much as $170USD one way from the country’s capital of Kathmandu. You can take a bus but plan on at least a 16 hour journey, even if you’re promised a 13 hour trip.

Chitwan National Park is much closer to Kathmandu therefore easier and cheaper to get to. That’s why everyone goes. But the crowds don’t help the wildlife spotting. There are more tigers in Chitwan but you’re more likely to spot the royal bengal tiger in Bardia along with other rare wildlife including elephants and the greater one-horned rhino which I was lucky to see on my recent visit.

We had spotted a tiger twice about 300 meters in the distance on my first day of walking safaris and I was on my second and final day in the park. I knew that the tiger spotting even for Bardia was rare and if I didn’t see anything else I was still blessed. It was a long one clocking many kilometres with little hope of seeing anything by the late afternoon.

As we were heading back to the lodge and I had accepted a day without wildlife we spotted a rhino in the river taking a solo bath. My heart rate felt like it doubled within a few seconds and we slowly started to creep up the river bank eventually facing it directly from the other side. I couldn’t believe how close I was-approximately 50 meters away.

It’s presence was powerful, breathtaking, intimidating and I was so in the moment capturing as many images as I could I didn’t realize what effect it had on me. Until with one turn of it’s head it swung the rest of it’s body in the opposite direction climbing up the river bank and disappearing into the grass.

For the remaining hour it took us to walk the rest of the way back I had a perpetual grin on my face and every few minutes I would shake my head in disbelief of what I had just experienced. It was mother nature’s creation, and the moment was absolute perfection!