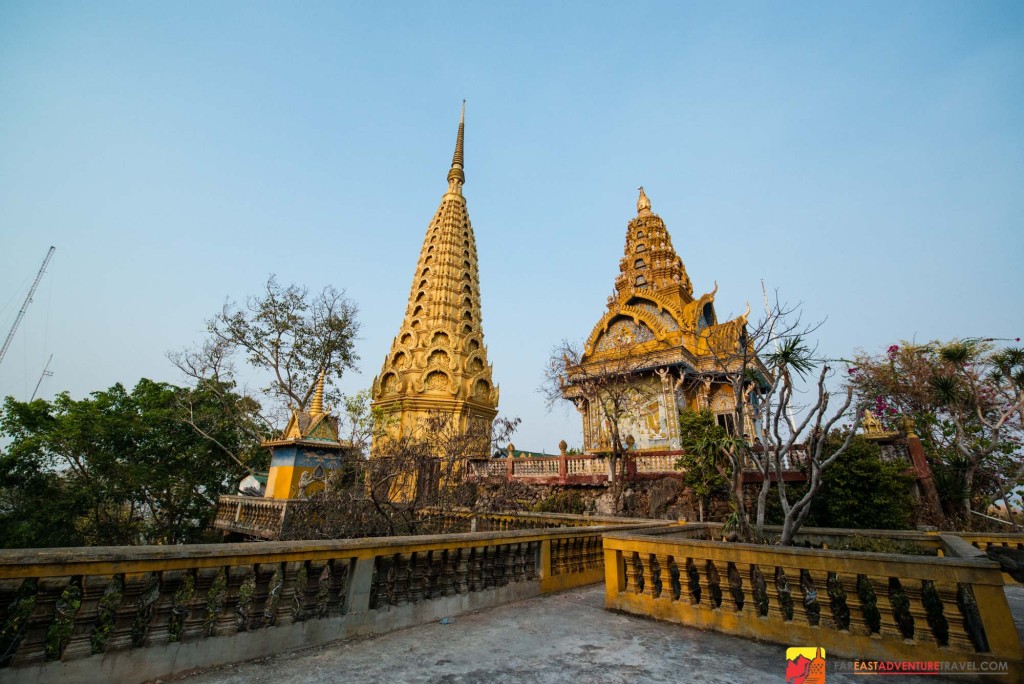 The golden stupa of Phnom Sampeau – 12km outside of Battambang, Cambodia

On my recent tour through Cambodia I stopped in the country’s second largest city, Battambang to enjoy its’ french colonial architecture, laid-back vibe, and some of it’s sites that lie within a few kilometers of the town.

One place that came highly recommended was a limestone outcrop where Phnom Sampeau, a famous buddhist temple is located. You can see it and it’s golden stupa sticking out from the peak in the background.

There are 650 steps that lead to the top where the golden stupa, built in 1964, is located along with those reported nasty monkeys. There are some fantastic views of the surrounding countryside of Battambang province.

If you’ve been traveling through the cities of Cambodia this will give you another interesting look at Khmer life. As you can see, it’s pretty laid back here. There are several interesting monuments and altars including this reclining buddha.

Through this whole hike I was always on the lookout for those monkeys. Finally I came across them, and they sounded pretty aggressive and potentially nasty.

Battambang province borders Thailand in the north and south and has the 4th highest population in the country. Because it’s agriculture industry drives the most revenue it’s known as the “rice bowl” of Cambodia.

Finally after a sweaty hike I made it to the top and the beautiful golden stupa. I think the late afternoon light is best to enjoy the glow from this spot. If you don’t feel like walking on your visit you can hire a motorbike, which will whisk you up here and back down for about 3 dollars US. I did find a monkey that was seriously stalking a man that had his food on the outside of his backpack, a definite no no here.

If your time is limited in Battambang I think this would be a worthwhile trip that you would only take a few hours in the late afternoon. Don’t miss the 144 steps that lead into a deep canyon with caves filled with stalactites, vines and these two Angkorian statues.

Don’t miss the views of Phnom Krapeu, otherwise known as Crocodile Mountain, a once stronghold of the Khmer Rouge.

Unfortunately Phnom Sampeau’s past includes horrific use of it’s peace, spirituality, and tranquility as a killing site of the Khmer Rouge. Known as the killing caves, this is where the Khmer Rouge cadres bludgeoned their victims, tossing their bodies down the skylight of this site. Today the peace and tranquility has returned, with a monument of skulls and bones and a reclining buddha that offers a return to the cave’s spiritual roots.

What makes an afternoon trip especially worthwhile is the site of millions of bats and their exodus of a massive cave located on the north side of the limestone outcrop. The spectacle starts usually at dusk and can last as long as thirty minutes. It’s a wonderfully powerful, spiritually uplifting way to finish up your visit to Phnom Sampeau.

That’s it for this episode, thanks so much for joining me! Until next time this is John Saboe, safe travels and Namaste!