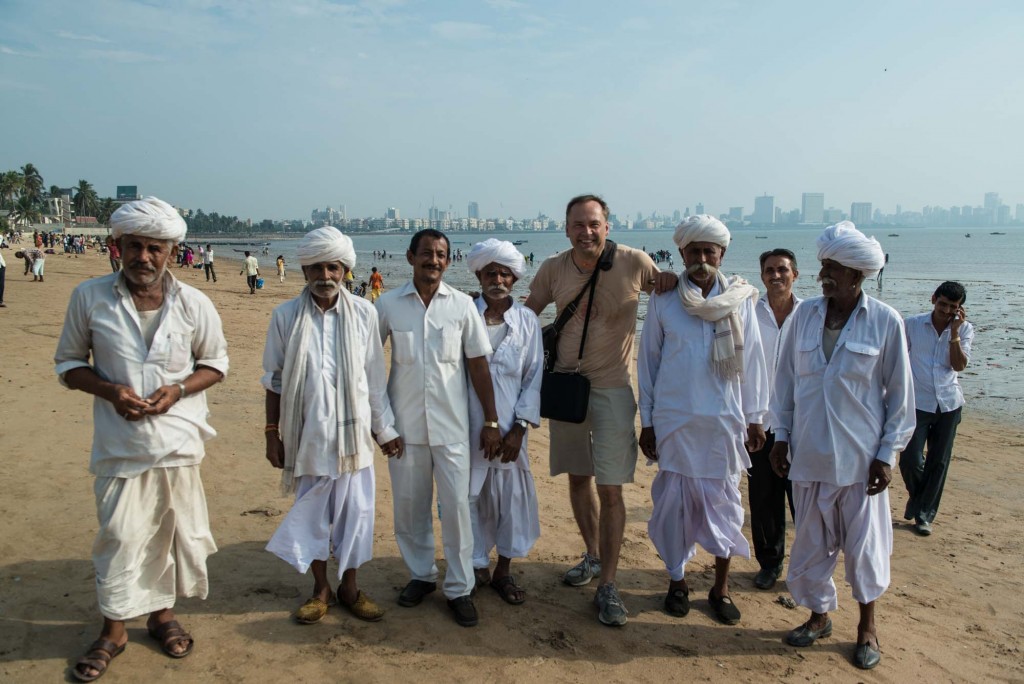 Meeting a friendly group of men from Rajasthan at the popular gathering place, Girgaon Chaupati or Chowpatty Beach in Mumbai, India

Experiencing the culture of Mumbai is as easy as hopping on a bus. Daily activities like riding the bus or local trains can be just as interesting and exciting as visiting an important landmark or museum.

Once you’re familiar with the numbers of the buses you’ll find they are frequent and easy to use with usually an English speaking ticket attendant on board.

The waters of Chowpatty Beach are heavily polluted so swimming is not recommended however a trip seaside is a lovely way to end the day as the sun sets over the Arabian Sea.

Smile, say hello and you’ve got instant friends, like these men I met who were visiting from Rajasthan.

Chowpatty offers views overlooking Malabar Hill, the exclusive neighborhood of tycoons and movie stars. Malabar Hill has some of the world’s priciest residential real estate where apartments can go for $2000USD per square foot. It’s also where the world’s most expensive private home valued at over 1 billion dollars is located.

Chowpatty is where residents come at night to view the Queen’s Necklace, the nickname for the street lights that run along Marine Drive.

Another everyday chore has become a tourist attraction in it’s own right in Mumbai. The Dobi Ghats are touted as the largest outdoor laundromat in the world. The clothes you dropped off at your hotel lobby desk might end up here alongside the uniforms and denim of the city. Views are great from the overpass near the Mahalaxmi train station.

Jump on the train for more Mumbai culture. The Western and Central lines serve greater Mumbai. It’s better if you avoid traveling during rush hour unless you want to experience what’s called super-dense crush load.

The Gateway of India was built to commemorate the 1911 visit of King George V and Queen Mary to South Mumbai. The first stone of the foundation was placed on the site March 31st, 1911 with the completion of the monument in 1924.

Right next to the Gateway of India sits another Mumbai landmark, The Taj Mahal Palace Hotel. The hotel first opened in 1903 and employs 1500 staff including 35 butlers. Many heads of state, celebrities and royalty including the Duke and Duchess of Cambridge have been hosted by the hotel.

On November 26, 2008 the Taj Mahal Palace Hotel was part of a series of horrific terrorist attacks in Mumbai. Hostages were taken with 167 people killed in the incident, 31 within the Taj complex. The billowing smoke coming from the building was one of the most iconic sites of the 2008 terrorist attacks.

I find Mumbai to be one of the great walking cities of South Asia especially the route from Colaba to the Churchgate and Fort neighborhoods, filled with British raj era architecture and interesting street life.

In an effort to placate local sentiments some buildings have been given new names the Prince of Wales Museum changed in 2000 to Chhatrapati Shivaji Maharaj Vastu Sangrahalaya or just (CSMVS). Chhatrapati Shivaji was an Indian warrior king of the 17th century.

Kala Ghoda or “black horse” is one of my favorite places in Mumbai. Considered Bombay proper and the premier art district it’s loaded with galleries, educational institutions, heritage buildings and is simply a pleasant place to stroll.

Fort as this whole area is known is the heart of the business district in Mumbai. This area gets it’s name from Fort George, the defensive area built by the British East India Company. It’s where the heavily secured Bombay Stock Exchange is located along with the Reserve Bank of India and other high profile companies.

The Bombay High Court is also close by with lawyers in traditional black and white walking the streets in between and after trial sessions. You can often hear them talking about their cases while grabbing a fresh juice or snack.

The center of activity in Fort is Chatrapti Shivaji Terminus, formerly known as Victoria Terminus. It’s one of the busiest railway stations in the world with over 3 million commuters a day.

Built in 1887 to commemorate the Golden Jubilee of Queen Victoria it serves as the terminus for long-distance and commuter trains of the Mumbai Suburban Railway.

Victoria Terminus was renamed Chhatrapati Shivaji Terminus in 1996 after the great king, founder of the Maratha empire.

CST has eighteen bay platforms, seven for local suburban trains, the other eleven are designated for long distance trains.

The station was designed in the style of High Victorian Gothic. It’s also heavily influenced by Indian architecture as seen in the skyline, turrets, and pointed arches.