Kanyakumari, India-Land’s End Of The Subcontinent 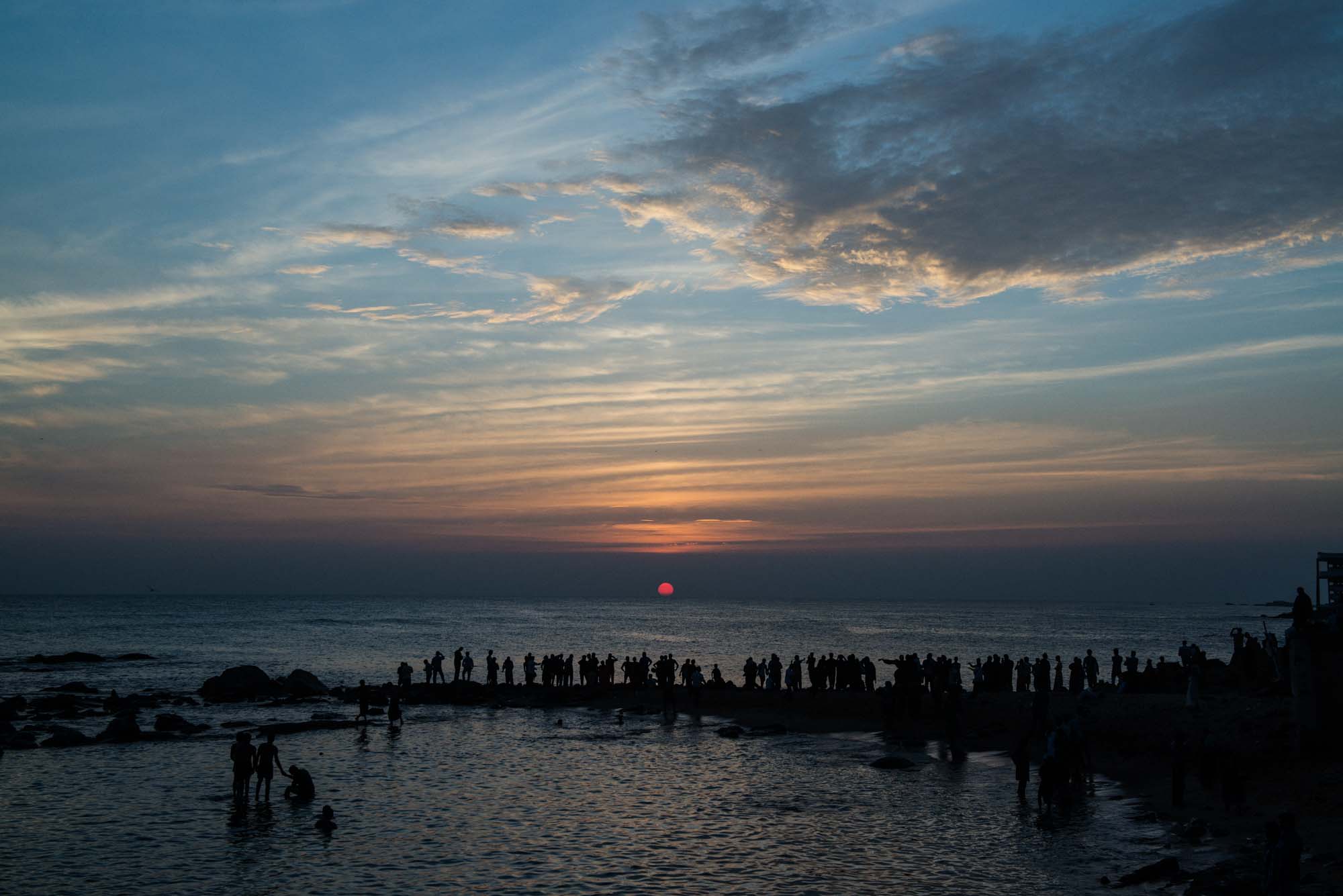 Kanyakumari India sits at the southern tip of the subcontinent. Technically it’s not the Republic of India’s extreme southern point, that title goes to Indira Point on Great Nicobar Island. It is however a popular tourist destination and important pilgrimage for many Indians.

My first look at the area was from it’s most visited sites, the Vivekananda Rock Memorial and Thiruvalluvar Statue, both located offshore on two rocks 500 meters from the mainland. Hundreds of people are ferried on boats everyday out to both the sites. It’s about 50 cents for the boat trip plus another small admission fee to the little island outcrops.

The first stop is the Vivekananda Rock Memorial that’s dedicated to Swami Vivekananda, an Indian Hindu monk who was key to the introduction of Indian philosophies to the Western world including yoga. He was also instrumental in raising the status of Hinduism to a major religion in the 19th century. It is said that the Swami Vivekananda attained enlightenment on the rock.

This is an incredibly spiritual moment for followers of Swami Vivekananda. You will feel it in their energy and enthusiasm. It’s a wonderful environment surrounded by the beauty of the Laccadive Sea. The rock is also a place where it’s said the Goddess Kumari performed austerity.

The buildings at the memorial consist of architectural styles from all over India. The Vivekananda Mandapam or main building houses a statue of Swami Vivekananda. Construction on the site was completed in 1970. There is also a meditation hall for visitors.

Just a short boat ride away is the rock where the Thiruvalluvar Statue, all 133 feet and 7 tons sits.

Thiruvalluvar was a Tamil poet and philosopher who wrote The Thirukkural, a book on ethics . It is revered as one of the most important works in the Tamil language. It’s thought that Thiruvalluvar lived sometime between the 1st and 3rd century B.C. The statue site was opened in 2000.

Back on the mainland it was time for some refreshments. Your choice of sugar cane juice or coconuts and lots of indian snacks and treats. The village is a vibrant spot with lots of people arriving before sunset.

The next stop was a walk to another important landmark of Kanyakumari, The Ghandi Monument. This site is where the ashes of the Mahatma were kept before their final immersion. In the form of Central Indian Hindu Temples it’s design allows the sun to hit the very spot his ashes were placed every October 2nd, his birthday .

Ghandi’s monument also allows views for a peak inside the Bhagavathy Amman Temple otherwise known as the The Temple of the Virgin Sea Goddess, the 3000 year old shrine is dedicated to the Goddess Kumari Amman and attracts followers from across India.

The town formerly known as Cape Comorin was named after the Goddess.

Much of Kanyakumari’s lure is the belief that it is the meeting place of three bodies of water, The Arabian Sea, Bay of Bengal and Indian Ocean but technically it is surrounded by the Laccadive Sea to the south, southeast and southwest. Never the less it is a spectacular spot for sunrises and sunsets.

Close to sunset time pilgrims and tourists started gathering seaside, some, as part of their pilgrimage, take a dip beforehand.

It is an exotic experience knowing you’re standing on the last piece of earth of the subcontinent watching the sunset with other travellers, pilgrims and Indian tourists marvelling at the wonder of this very special spot of the planet.

Rain can somewhat dampen the mood as it did the next morning. Regardless of the wet weather hundreds still made their way past the shops still closed to the seaside, gathering around the red flag that marks the end of the subcontinent.

One last look at the Thiruvalluvar Statue and the Vivekananda Rock Memorial and a dip in the sea before more groups converge on the small town at India’s land’s end.

On the train leaving Kanyakumari heading north past the Cardamom Hills of the Western Ghats I’m once again reminded that some places you visit aren’t truly appreciated until you leave.

There’s no question the power of Kanyakumari lies in it’s geographical location and for some it’s significance as a spiritual center. I was now just starting to appreciate the spirit of the gathering of people and the sharing of an experience like no other regardless of motivation or beliefs.