The Kali Temple, in the Kalighat section of Kolkata India. I was here with the my friend Subroto who was showing me the area. This is also where Mother Teresa’s home for the dying/destitute is located, and it’s also where you can find Bhola the goat. Yes this goat is named Bhola and he is cared for by the people of the temple.

Up until now I’d never seen anything quiet like Bhola. He seemed larger than your average goat with personality to go with his size. He’s apparently well known around here. Not only for his size and presence, love the henna died coat, but he also does tricks. His handler wanted to show off his moves to us.

We were told he is well cared for and considered almost sacred by the temple. A miracle in itself considering they sacrifice his brother goats there to the God Kali all the time. He must be well cared for. What goat would want to do this unless there’s something in it for him. Oh, and I was told he likes whisky. So that’s why he’s so cooperative, and maybe also because he knows he always close to death’s door.

These men who came by know Bhola and some of his bad habits, like smoking. Yes apparently he smokes too. At least someone taught him how to. But today it looks like he’s only interested in eating cigarettes, not smoking them.

The whole point of this story? Only in India is it possible to see a very famous temple, a home for the dying started by a saint to be, and a smoking, whisky drinking goat that can do tricks, all in the same block. For breezy-size.flywheelsites.com this is John Saboe from Kolkata, India. 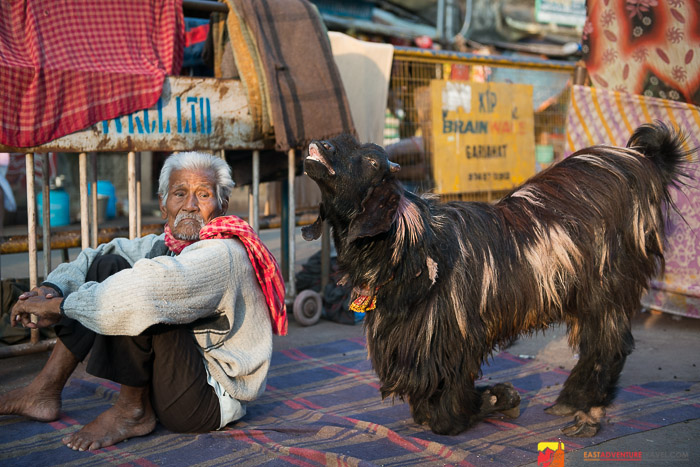 Bhola The Goat Outside The Kali Temple – Kolkata, India