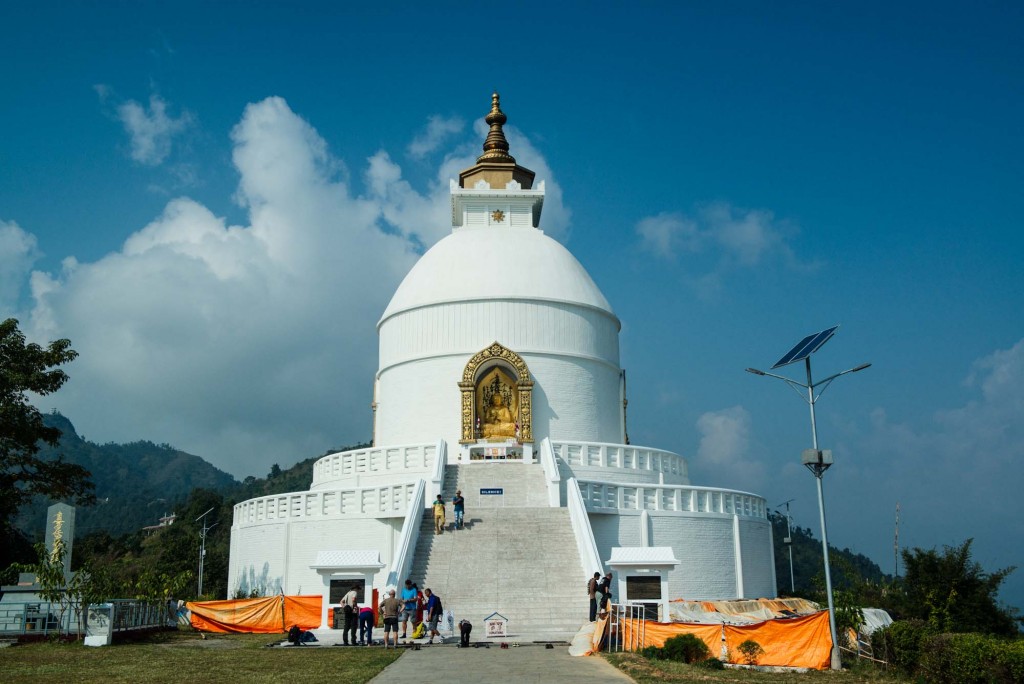 The World Peace Pagoda of Pokhara, Nepal is located high atop Ananda Hill a short boat ride and hike from the town

Pokhara is the second largest city in Nepal. Situated on Phewa Lake it’s close proximity to the Annapurna range of the Himalaya makes it a trekking center for the world-famous Annapurna Circuit.

To get some advice on things to see and do in Pokhara, especially if time is limited, I spoke with Rajendra Dhakal, Pokhareli native, community leader and managing director of the Hotel Glacier Pokhara.

Back to Phewa Lake en route to a hike to the World Peace Pagoda in Pokhara. This is not the only approach to the trail that leads to the Pagoda but it’s one of the quickest ways to a trail head. Picking up a boat for hire gets you to the start in less than 30 minutes. You can choose a one way trip and walk down the other side of the hill to return to the town or you can have your boatman wait for you while you hike up to the Peace Pagoda and back down the same trail. About 2 hours or so in total.

You can also incorporate a stop at Bahari Temple on the little island you pass by. This is a Hindu temple dedicated to the Goddess Durga and is also a place of worship for Buddhists. It’s especially busy there during Nepal’s biggest festival, Dushain.

It’s not long before you can catch a glimpse of the gleaming white stupa at the top of the hill you’ll hike. About 45 minutes from the boat launch to the top.

I’m dropped off on the shore at the trailhead with about 2 to 2.5 hours to hike up, spend some time at the stupa and hike back down.

This is one of the easiest return trips. You can walk and hike from Pokhara up the other side of the hill but this will take you at least 2-3 hours each way. Or you can split the trip by boating one way and hiking back. Either way, the boat trip cost is the same.

My visit to Pokhara was in the fall coinciding with a trek of the Annapurna Circuit so it was still quiet warm. You might find a morning hike more comfortable.

It’s not a strenuous hike but it helps to be fit. Much of the trail is made up of stone stairs with plenty of signs and little altars along the way to keep you in the right direction.

As you gain altitude you’ll start to see the broad view of Phewa, the largest lake in Nepal surrounding the expanse of the town below. There was a haze and a few clouds hanging over one of the best views of the Himalaya in Pokhara that day hiding the Annapurna range and some of the highest mountains in the world.

Pokhara is located in the Northwest corner of the Pokhara Valley where there’s a quick gain in elevation. At a distance of 30 kilometers the mountains rise from 1000 meters to over 7500 giving the region one of the highest rates of precipitation in the country. Don’t be surprised by an afternoon shower and clouds covering the Himalaya, sometimes for days.

It’s not long before you can catch a glimpse of the gleaming white stupa at the top of the hill you’ll hike. About 45 minutes from the boat launch to the top.

Pokhara lies on an important ancient trade route from China to India and was still used up until the occupation of China in Tibet and the Indo-China war of 1962. It was originally apart of the Kaski Kingdom, one of the 24 kingdoms of Nepal. There are still ruins from this time in the hills surrounding Pokhara.

After about 40 minutes of hiking the World Peace Pagoda comes into view from above.

The World Peace Pagoda or Shanti Stupa was established in 1973 by Nichidatsu Fujji, a Buddhist monk and the founder of Nipponzan-Myohoji, the Japanese Buddhist religious organization that helped build this and 79 other peace pagodas around the world. Two of the stupas are located in Nepal. One in Lumbini, the birthplace of the Buddha and this one on Ananda Hill in Pokhara.

As you walk up to the first viewing platform you get the widest view of the valley and the mountains and hills that surround Phewa Lake and Pokhara. The highest hill on the other side of the lake is Sarankot, with just a slight view through the clouds that day of Annapurna ll and the nearby Himalayan range.

In the Nipponzan Myohoji Temple, monks were in the middle of chanting. This small order of Nichiren Buddhism is actively engaged in a world-wide peace movement whose regular activity involves chanting Glory to the Sutra of the Lotus of the Supreme while beating drums promoting peace and non-violence.

High up Ananda Hill overlooking the stupa, and the Himalaya while listening to the beat of the drums and chanting was incredibly spiritual and moving.

There were many battles with the government to build the stupa. In 1999 it was finally completed and officially opened.

The pagoda or stupa is 144 feet high and 344 feet in diameter with two tiers in which to circumambulate the monument. On the second level there are four gifts of Buddha statues displayed. The Darmachakra Mudra from Japan, Lumbini from Nepal, Bhodi Gaya from Sri Lanka, and Kushinagar from Thailand. Each statue represents an important event in the life of the Buddha.

The teachings of the Buddha along with the breathtaking views of Pokhara, the valley, and the Himalayan range perfectly harmonized the message for peace throughout the world.

After one last long look at the view below I was hiking back down to the lake. As we paddled back to Pokhara town I gazed at Sarankot high above Phewa and the cloudy skies. In this incredibly inspirational setting perhaps maybe there was one more chance for some breathtaking views of the Himalaya. For Far East Adventure Travel, this is John Saboe.