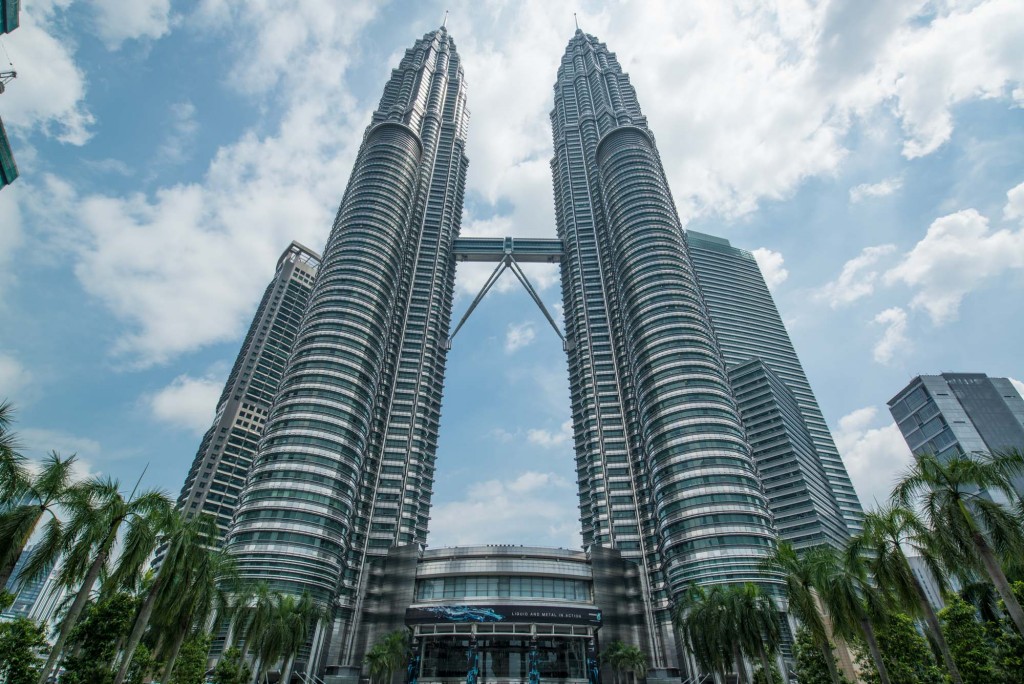 The Petronas Twin Towers located in Kuala Lumpur, Malaysia were the tallest buildings in the world from 1998-2004

A limited number of tickets are sold each day for the strictly guided tour of the buildings. Your ticket comes with a set tour time, that’s why I was in such a hurry.

After the initial elevator ride we arrived at the skybridge that connects the twin towers on the 41st and 42nd levels made famous by the 1999 Sean Connery Catherine Zeta-Jones movie “Entrapment”.

The skybridge weighs 750 tonnes and is not actually attached to the towers instead it slides in and out so it can sway during high winds and maintain structural integrity. Even though you’re not at the highest viewing floor it’s position makes it a pretty cool spot. This was one of my favorite parts of the tour.

We’re given about 10 minutes to wander around the deck before our color coded group is called to move up to the 86th floor.

Back in the elevator, for some small talk, or maybe not. This appears to be a glass elevator but this is actually a virtual view. Just a ride made interesting with a fake outside video, because whoever designed this was very smart and knew how hard it is to make eye contact and small talk in an elevator, especially if you’ve got a long ride. It’s a pretty realistic video with movement that seemed to match the speed of the elevator but the visibility didn’t mirror the current environmental conditions.

Arriving on the 83rd floor we are escorted to another elevator that took us to the final stop, the 86th floor and the dizzying views of Kuala Lumpur.

On the day of the visit the smoke created from the slash and burn fires of Indonesia was hampering the views but seeing the other tower at this height and this close was absolutely spectacular.

The towers were designed by Argentine architect César Pelli. Incorporating Islamic geometric patterns in the shape of eight pointed stars they symbolize the principle of “unity within unity, harmony, stability and rationality”. Anyone who appreciates design and architecture will get a real thrill out of this tour.

The haze was the result of illegal slash and burning of fields mainly for Palm oil production on the Indonesian islands of Sumatra and Kalimantan, Borneo.

After about 15 minutes our time was up on the 86th floor and we were escorted to the elevator back down to the 83rd floor for a look from this level before exiting the tower.

In the hazy distance we could see the Menara Kuala Lumpur or KL Tower. Boasting the highest public viewing deck in Kuala Lumpur the KL Tower sits on Bukit Nanas or Pineapple Hill giving it a slight height advantage even though the Petronas Towers are structurally taller.

I don’t think you visit the Petronas Towers just for the view. Today’s visibility was very poor and disappointing but the experience of being inside this engineering marvel with a design right out of the 1927 Fritz Lang futuristic film Metropolis was rewarding and very memorable.

Back in the elevator with one last virtual view of Kuala Lumpur before ground level. There are a total 29 double decker high speed passenger lifts serving the towers not including service and executive lifts. They can travel between 3.5-6 meters a second.

On the ground level at the front entrance you can admire the large pool and fountains facing the towers. On the other side sits the 17 acre KLCC Park. Inside the lobby you can usually enjoy a display of some of the cars Petronas, the state-owned oil company sponsors in various motorsports events. Petronas takes up the offices of tower one while tower two hosts a number of multi-national companies.

Because the Malaysian government had a 6 year deadline to finish both towers they hired two companies to complete construction on the former site of the Kuala Lumpur racetrack. Japanese and South Korean firms were contracted to complete construction. The Japanese would build the west or tower, 1 the South Koreans tower 2. Planning started on the buildings in 1992, construction began in 1994 with completion of the towers in 1996.

In 1999 Felix Baumgartner set the record, at that time for basejumping from a building by jumping off a window washing crane from the towers. After being arrested twice on past attempts French urban climber Alain “Spiderman” Robert using only his bare hands climbed to the very top of tower 2 on September 1st, 2009.