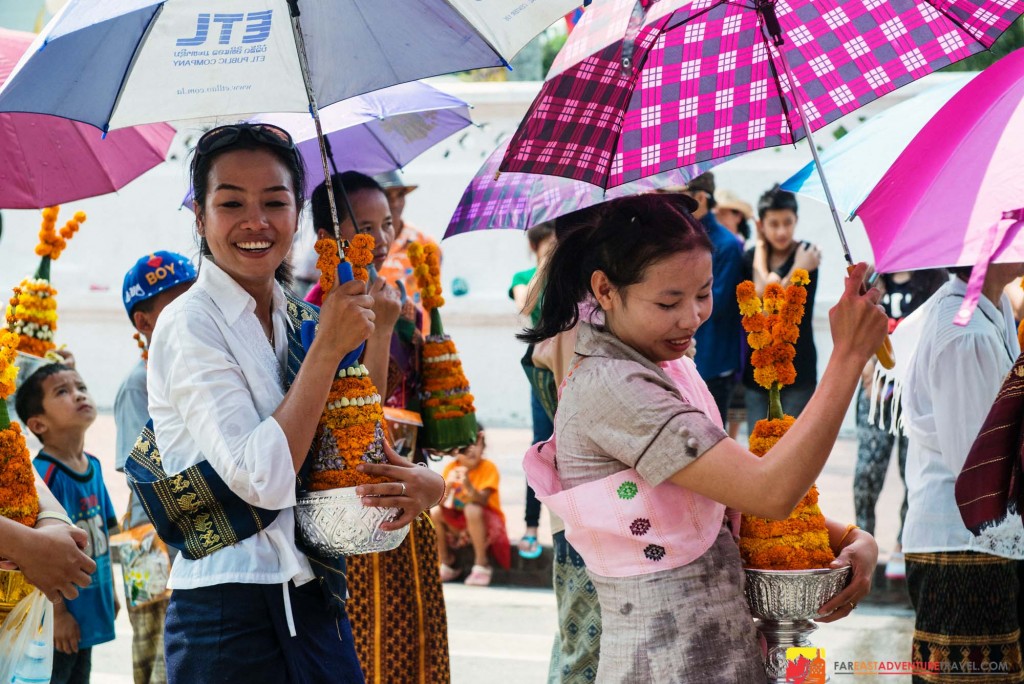 One of the highlights of Pi Mai in Luang Prabang, Laos is the wonderful New Year parade

Luang Prabang, Laos is one of the most picturesque towns in Southeast Asia. The name literally translates to Royal Buddha image. It’s rich history, beautiful architecture combined with a strong Buddhist monastic community makes it a place all too tempting to stay longer than planned. On my most recent trip to the former royal capital I was fortunate enough to be in time for the country’s most important holiday and festival, Pi Mai or Laos New Year.

Even if your visit is outside of festival time you will be enchanted by one of the most beautifully preserved towns in Indochina full of French colonial architecture.

One of the best places to start your exploration of the town is a walk up the 328 stairs of the highest hill in Luang Prabang-Mount Phou Si, where you can visit the Buddhist temple Wat Chom Si. Here you can see the whole town and the peninsula it sits on between the Mekong and Nam Khan Rivers.

There are a few approaches to the top but I chose to start from the staircase across from the Royal Palace Museum and temple exiting on the other side to see Wat Tham Phou si.

Sunset is a popular viewing time so if you don’t like the crowds, and it’s a tight squeeze at the top, try a walk in the morning.

Phousi translates to sacred hill and is considered the spiritual center of the town. It’s believed that the hill was once the home of a powerful naga serpent deity, lending more spiritual significance to the site.

As you near the top of the hill the golden spires of Wat Chom Si come into view. This temple was built in 1804 and has become a symbol to the significance of Luang Prabang’s cultural importance to Laos.

The view is not only spectacular but a great way to orient yourself to the city. Seeing the city and it’s peninsular feature between the Nam Khan and Mekong Rivers I found allowed me to ensure I wouldn’t miss any part of the town during my visit.

It’s tempting just to hang out in the old town with it’s amazing selection of cafes and restaurants. But venture out and you’ll see more of the real Laos.

On the way down take the stairs on the other side of the hill that lead to the Wat Phousi Shrine and get your fill of the Buddha in various states of contentment.

There are also a few atmospheric outdoor restaurants on the other side of the river that are easily reached from the bamboo bridge and some real authentic Luang Prabang neighborhoods.

It’s a wonderful setting even more so if you’re lucky enough to cross when the monks are leaving the monastery after the morning alms.

Watching Tak Bhat or the morning alms is one of the highlights of a visit to Luang Prabang. Many tourists like to take part in the morning offering of food to the monks but unless you are really familiar with Buddhist rituals and traditions out of respect opt for observing it. Tak Bhat is easily enjoyed from a distance. Getting to close and in the way of the monks is disrespectful and just downright unclassy.

You can easily OD on Buddhism and wats in Luang Prabang as it has the highest concentration of temples in the whole country. One you must visit because of it’s history as a temple of the royal family is Wat Xieng Thong, or Temple of The Golden City. It’s a celebration of art, culture, and the royal family making it one of the most significant temples in all of Laos.

Construction on the site began in 1559. There are over 20 buildings on the ground including shrines, pavilions and residences. Many of the entrances feature carved gilded doors depicting the life of the Buddha. This is not a museum so life, prayer and worship continue on here as it has for hundreds of years. Many of the buildings exteriors are decorated with beautiful mosaics depicting traditional life in Laos.

Another temple that’s worth exploring is Wat Sen. This temple was built in 1718 by King Kitsarath using 100,000 stones from the Mekong River. The name literally translates to temple of a 100,000 treasures.

After hiking up Phousi hill and crossing the bamboo bridge, plus a little temple hopping I was ready for a little break in one of my favourite cafes in the area but if I wanted to stay dry it was going to be a challenge.

The tradition of water throwing leading up to and including Pi Mai or Laos New Year was well underway. If you are bothered by random people running up to you and dousing you with a bucket of water or firing a squirt gun at you my advice would be to stay away from traveling in the country in mid April.

With scorching temperatures in the high 30’s celsius many welcome the refreshing splash. The official festival lasts for three days approximately between April 13-15 but the water throwing starts a few days before and can carry on after the festival.

Luang Prabang takes on a completely different feel becoming crowded with tourists many simply here for a big water fight, which is what the Buddhist festival in alot of ways has become.

Water throwing started out as a cleansing ritual for the New Year with people gently sprinkling each other with scented water.

Water throwing, like it or not, is very important to the Laos people and it’s considered good luck to be doused. It’s now also become an excuse for the youth of the country to dress a little less conservatively and break away from more expected behaviour.

Many are determined to squirt passersby with their huge imported plastic guns like the one individual hanging outside one of my favourite cafes. The thought of sitting in soaking wet pants while having a coffee wasn’t my idea of a relaxing break, even with the hot temperatures. So I ducked back to the guesthouse and waited for the elephant parade when the water throwing comes to a halt in the old town.

New Year’s preparation also includes cleaning the home and streets and many local residents pitch in to sweep the streets of the town.

It’s no surprise that elephants are included in Pi Mai celebrations in Luang Prabang. Laos, originally named Lan Xang translates to land of a million elephants. The country and it’s people have a 5000 year-old history of working with the largest land mammal on the planet. Today there are an estimated 700-1200 in the wild and anywhere from 1100-1300 in captivity.

The elephant is an important part of Laos culture. In Buddhism and Animism it is the symbol of mental strength. Everyone in Luang Prabang wants to get it on the elephant parade.

The power and charisma of these creatures swept the crowds that gathered on the main road in the town heightening the excitement of the New Year.

During New Year festivities Luang Prabang hosts a special morning market featuring local food specialities and handicrafts. Many will come to buy clothes for the New Year and also purchase birds to release for good luck. This is a way of making merit in Buddhism. Other animals like turtles, eels and fish are also purchased and released. The market is a perfect way to experience the local culture, and the colorful people that work the booths.

A quick look around the picturesque temple of Wat Mahathat, another significant Buddhist complex not to be missed before the highlight of the festival, the Pi Mai parade.

The masses were still in the middle of giant water fights in Luang Prabang’s old town while camera crews were preparing for the live telecast of the parade. An image of a little girl dressed in traditional Laos clothing walking down the street followed by a foreigner pumping up is water gun best sums up the atmosphere of the former royal capital.

For me this was really the highlight of Pi Mai celebrations in Luang Prabang. A genuine warm spirit and pride in the traditions and culture of Laos were obvious in the faces of the participants in the parade. The excitement coming from the Laoatian spectators, some dressing up and traveling for hours by local bus just to see this event was infectious.

With Southeast Asia’s increasing modernization and influence from another countries and cultures it’s refreshing to see celebrations including the Pi Mai parade are still truly authentic experiences.