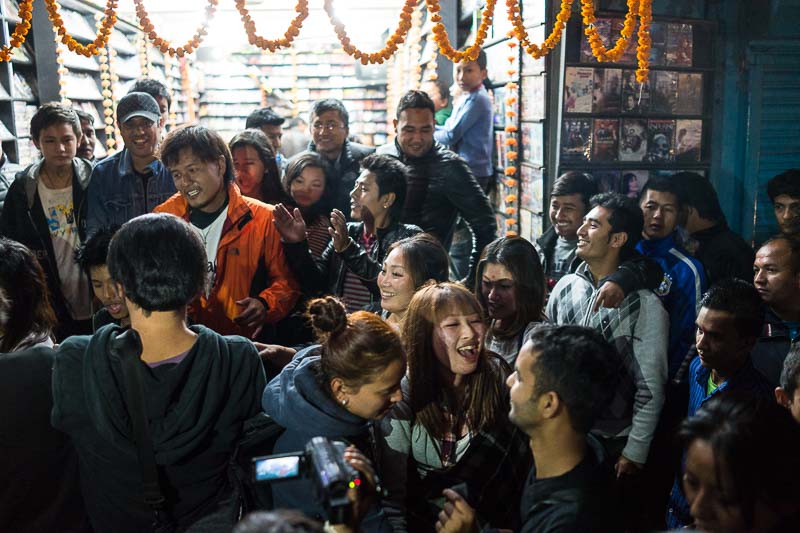 A crowd dancing and celebrating Dipawali in Kathmandu’s Thamel district

Hi I’m John Saboe the publisher of Far East Adventure Travel Magazine and in this week’s podcast, some of the festivities and celebrations of Kathmandu and Nepal.

It is coming up to a very special time of year in South Asia right now and especially for Nepal where Dashain, one of the most important festivals of the year in their Hindu calendar is about to get underway. In Nepal Dipawali, or in India, Diwali, the Hindu Festival of Lights, usually falls right after Dashain. 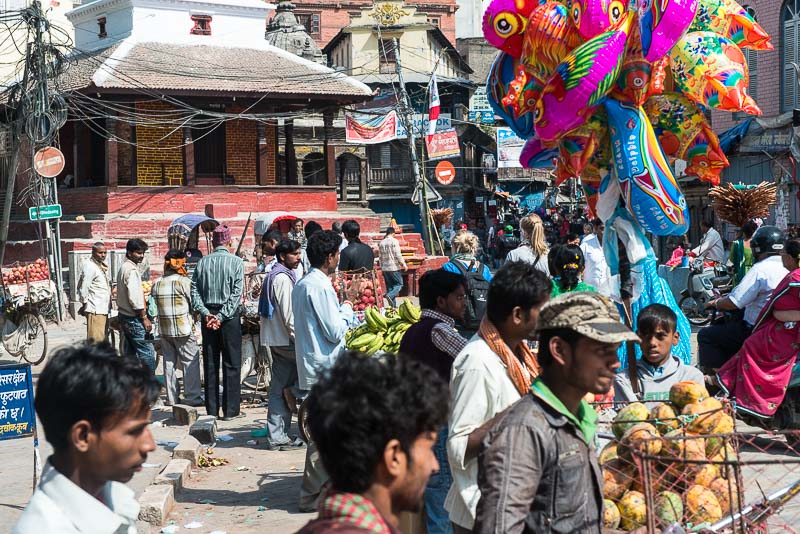 Crowds gathered during the Dashain Festival in Kathmandu’s Durbar Square

Dashain is the celebration of good over evil. The story goes that Mahishasura, a demon, had created terror in the the world of gods. The Goddess Durga emerged and killed the demon and saved everyone from terror.

Throughout the festival people pay respects to the Goddess Durga and all of her manifestations. The importance of the festival is it’s reminder of the universal principles of truth, justice and virtue and how it must prevail over deception, injustice and wickedness.

Dashain is the longest of the Hindu festivals, lasting up to 15 days, and considered the most important one of all in Nepal.

In preparation people clean, paint, and decorate their homes beautifully to welcome the mother goddess so she will visit and bless the house with good fortune. The markets are busy with shoppers buying gifts, new clothes and luxury items as well as enormous amounts of temple offerings for the gods, including live animals.

Day 8 provides high drama when the most demonic of Goddess Durga’s manifestation’s, the blood-thirsty Kali is appeased with hundreds of thousands of animal sacrifices throughout the country. Buffalo, goats, ducks, chickens, even pigeons are sacrificed-their blood offered to the goddesses.

These rituals are not for the faint of heart. I have seen some of them take place in Kathmandu’s Durbar Square and I had to look away, when a goat was given it’s last rights, then dragged into the altar area to be decapitated. Later to see it’s headless body lying on the ground, it’s head lit on fire. All in a matter of a few minutes. 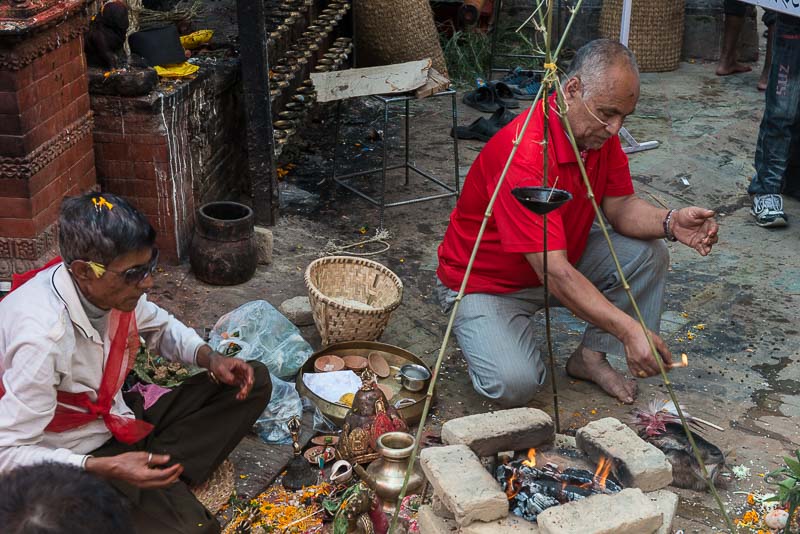 It was for me, an ignorant Westerner, not used to these kinds of rituals, a little disturbing. I remember at the time feeling the immediate energy loss in the air of the spirit of that goat, right there in front of me. I was a little shocked looking at the lifeless headless body, and watching the priests light the goats head on fire. At the same time though I couldn’t help but feel a deep sense of appreciation for life afterwards.

Dipawali, in India, Diwali, is The Hindu Festival of Lights, lighter fare and the purpose being to signify the victory of light over darkness, knowledge over ignorance, good over evil, and hope over despair. In Nepal, it is also called Tihar. There are variations of the celebration in the Newari culture as well.

The third night is the most important in the festival. Lights and lamps are lit, many placed in the doorway to welcome Laxmi, the Goddess of wealth. Windows and doorways are also decorated with garlands of marigolds. Laxmi is thanked for the benefits she has bestowed on the family. 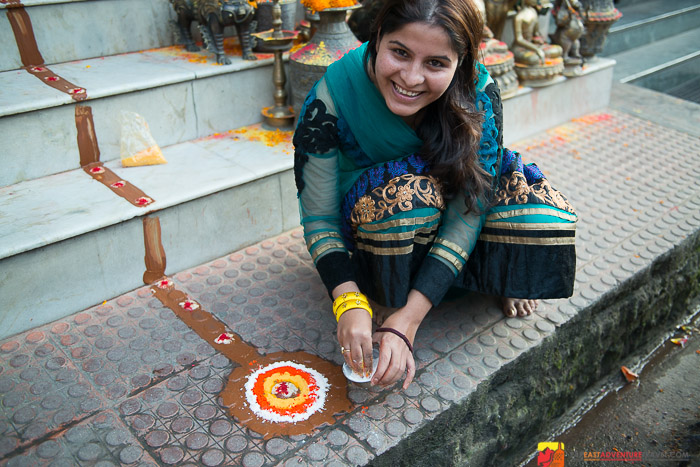 This ritual is also important for businesses, bringing them good luck. People dress up in new clothes, and there is definitely a feeling of joy in the air.

I have been in Nepal and India for Dipawali, Diwali, Tihar. I have seen Dashain in Nepal and its’ rituals including the sacrifices. When I trekked through the Upper Mustang region of Nepal days before the start of Dashain hundreds of goats were being herded from the valley towards Kathamandu all headed for eventual sacrifices to Kali and dinner celebrations for the families that would purchase these goats. Because of the cost, for some of these families, it’s the only time of year they will eat meat.

When I arrived back in Kathmandu at the start of the Dashain festival it felt like a different city. The heavy traffic was gone. I remember hiring taxis to get me across town, the ride taking less than half the normal time. Many shops and restaurants were closed. People had left the city for the villages around the country where their families were based. There was still plenty of activity though, with many sacrifices taking place in the main Durbar Square of Kathmandu.

Last year I arrived in Kathmandu on the important third night of Dipawali, when Laxshmi is celebrated and thanked.

In the Thamel section of Kathmandu, the main tourist commercial area where the backpacker hotels, restaurants that serve pizza, and banana pancakes are located and where you can shop in stores that stock a huge variety of bracelets, necklaces, earrings, made out of yak bone and turquoise preparations were underway.

The store owners, hotel and restaurant operators were all decorating the front of their shops and places of business with candles, garlands. Rangoli, the art of creating patterns with coloured sand,colored rice, flower petals and dry flowers were also being made outside the entrance to homes and businesses. Cleaning the house and business is also very important and it seemed everyone in Thamel was sweeping their front entrance and steps.

The night is magical with many businesses decorated with thousands of lights and open late. It is an important shopping season as well. Streets were crowded with people wearing their new clothes. I had never seen Kathmandu so alive at night before.

The next day I was gone, not from Nepal, just Kathmandu on the way to trekking the Kanchenjunga region. I did not leave the celebrations behind though. That night we were visited in our guesthouse dining hall by a group of men performing traditional songs in exchange for a little change. They were all from the Nepali Special Police Unit. Early in the evening on the drive through the windy hills I found myself sick on the side of the road while men passed by me singing traditional Dipawali songs.

On my travels I talked with several men that were looking forward to the return of their sisters to their homes in anticipation of Bai Tika, the 5th day of celebrations. The day sisters place a tika, a red dot on the forehead of their brothers to ensure them of a long life and to thank them for their protection. One man I spoke to at Biratnigar airport in Eastern Nepal was waiting to pick up his sister who was arriving from Australia to take part in the ritual. 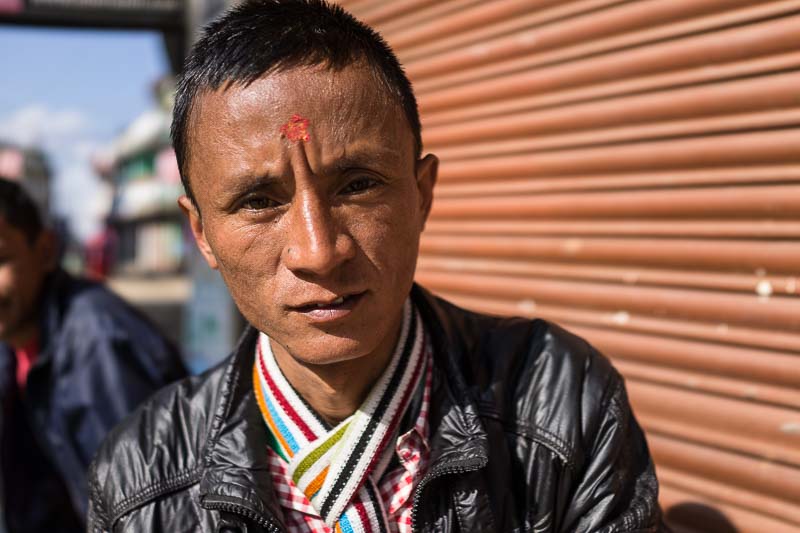 On Bai Tika, the 5th day of Dipawali sisters place a tika, red dot, on their brother’s forehead

If you’re traveling through Nepal during Dashain or Dipawali you will be treated to many rituals and celebrations and most likely be included in some of them, as this is the style of South Asian hospitality. Also expect delays, challenges finding transportation and increased fares in certain instances. When I was staying near Chitwan National Park the hotel staff was at a bare minimum due to Dashain, so prepare for limited services. During the last few days of Dipawali we also had a very hard time hiring a driver to take us from the airport at Biratnigar in Eastern Nepal to Taplejung, the start of the Kanchenjunga base camp trek.

I have been extremely fortunate to have spent time in Nepal and India during these celebrations. For Westerners the spirit of the festivals will appear to be similar to Christmas. I believe that these celebrations of Nepal are very inclusive, The hospitality and enthusiasm that local people show in their willingness to share in their beliefs is beyond kindness. The great Mahatma Gandhi was said,” a nation’s culture resides in the hearts and souls of it’s people. I know feel it every time I am in Nepal, especially for Dashain, and Dipawali.

Cultural exploration, it is one of the great joys of my life. I hope I can pass on to you those feelings and ignite your curiosity and interest in the festivals of Nepal.

That’s it for this week’s edition of Far East Adventure Travel The Podcast. Don’t forget to send me an email at john@breezy-size.flywheelsites.com with your thoughts and what you’d like to hear on the podcast. Also if you like what you’re hearing please go to the podcast page on iTunes and write a review, I would really appreciate the positive feedback. Also don’t forget to like us on Facebook. You can also follow me on Twitter, JohnSaboe@fareastadvtrvl and Google+.
Thanks so much for listening this week, next week Trekking to the sunrise of Himalayan Giants, India’s Singalila Ridge. Until then this is John Saboe, thanks so much for listening, safe travels and Namaste! 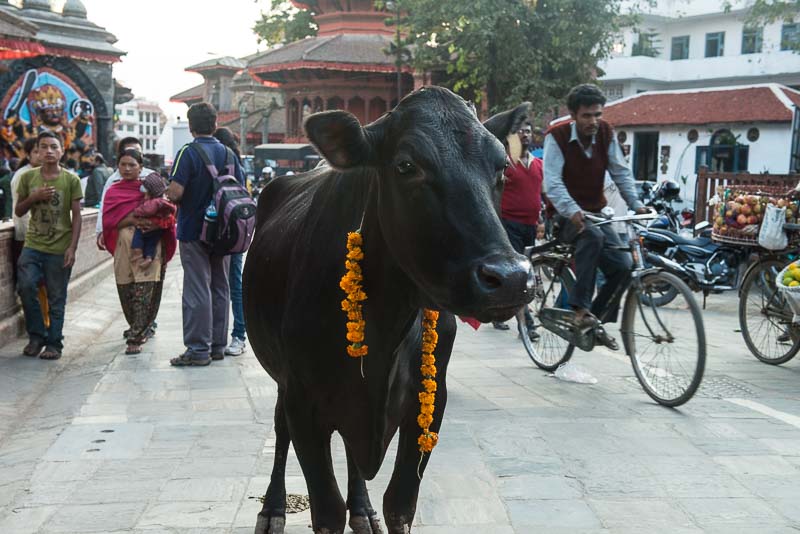