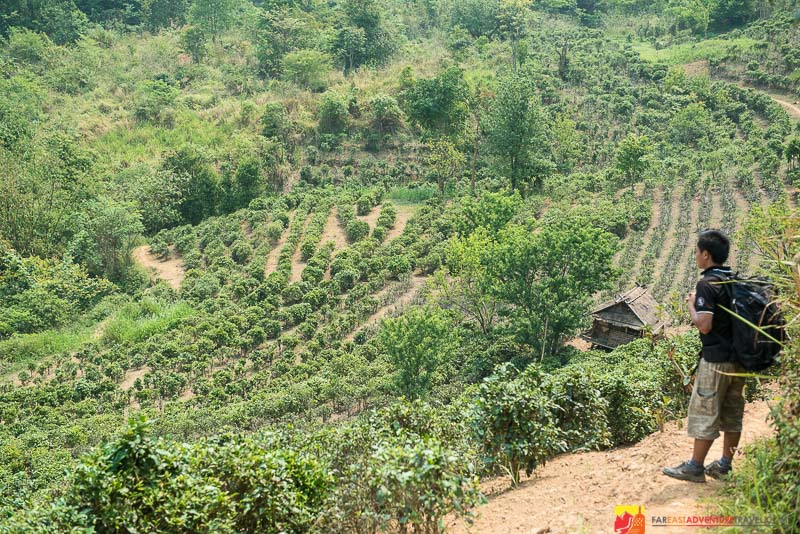 The Journey to Northern Laos

Hello Namaste and welcome to another edition of Far East Adventure Travel-The Podcast, bringing you stories, adventure, and travel advice from one of the most exciting adventure destinations on the planet Asia.

In this week’s episode of Far East Adventure Travel-The Podcast, trekking through the jungles of Northwest Laos to remote Akha hill tribe villages.

I really enjoyed my recent trip to Laos and look forward to seeing more of this interesting land-locked country in South East Asia. There are still many things I would like to do and for the budget-minded or anyone that is seeking a great experience in this part of the world that still sees fewer visitors than most any other country in S.E. Asia this is a goldmine for travellers.

Once a French colony, Laos is filled with intrigue and a past rich with culture and mysterious undertakings by the U.S. who were involved with the secret war, and ran such covert operations as the C.I.A.’s Air America airline.

Today Laos is the Peoples Republic of Laos, a communist country since 1975 and one of very few communist states left in the world. It is also the poorest country in East Asia. It is banking on huge hydro-electric projects to ensure future prosperity and growth for the country.

One such project is underway in Northern Laos on the Nam Ou River where I recently trekked to visit hill tribe villages which eventually will be displaced due to the damning of the river.

Northern Laos, particularly the town of Phongsali sees very few tourists and is the perfect spot for the adventurer. Depending on which route you take to get here an overland trip will be long and arduous, but well worth the payoff of authentic trekking and visits to non-tourist affected villages.

The Akha are spread out throughout 5 different countries in Asia, starting from their roots in China, they have moved over time due to civil wars and are now also found in Vietnam, Thailand, Burma, and Laos.

Northern Laos has some of the most authentic village trekking in all of S.E. Asia and this is partly due to it’s remoteness, and lack of commercialization. In Thailand, you will find trekking and Akha villages but they are more focused on tourism as a way of life. Mostly you’ll find the easier it is to access a place the more commercial the experience. Northern Laos is far from being easily accessed.

The quickest way to get there is by plane. At the time this podcast first airs there were reported two flights a week from the capital Vientiane, Tuesdays and Saturdays, and two flights back to Vientiane from Phongsali, or it’s closest airport on those same days.

So if you plan right you could arrive in Phongsali Tuesday, start a 3 day trek Wednesday, arrive back in Phongsali Friday afternoon and leave for Vientiane on Saturday. This will be the most expensive way to get back and forth but the quickest and most convenient and if you are pressed for time, or simply want a much more comfortable way into this part of the country.

For those with the time seeking more adventure a combination of buses and riverboats can get you there in 3 days from the beautiful cultural capital of Luang Prabang. Riverboats aren’t always reliable depending on the time of year so buses really are long, not as comfortable but the most reliable way in most circumstances to get to remote Northern Laos. If you’re coming from Thailand through Houay Xai in Laos you can take the slowboat to Pak Beng, then instead of going on to Luang Prabang you can take a bus to Udomxai then pick up a bus from there to Phongsali.

I took local buses from Luang Prabang to Phongsali which were long and extremely tiring rides. On the way back I arranged a flight from Udomxai to Vientiane having to only endure the 8.5 hour local bus ride from Phongsali to Udomxai. 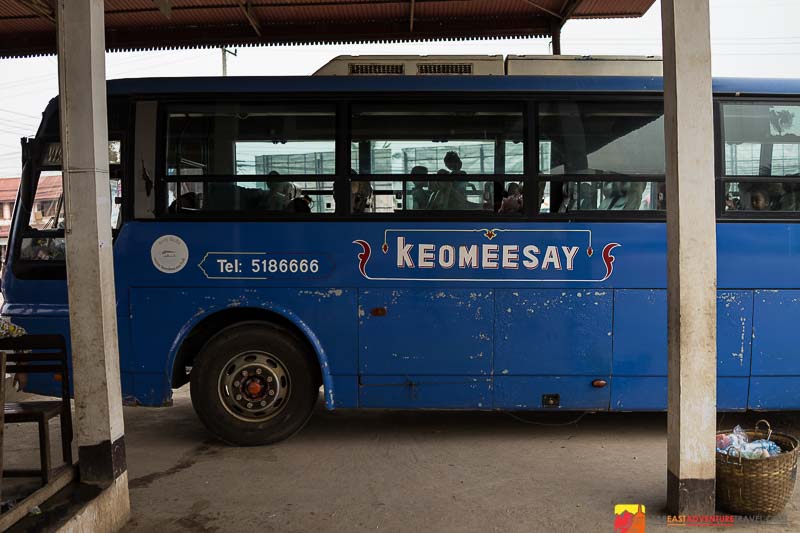 I was very tired by the time I arrived in the heart of trekking country in Northern Laos. Actually exhausted. I had arrived at the bus stop in Luang Prabang only to find out the direct bus to Phongsali was cancelled due to the holiday, Pi Mai, Laos New Year. So I was forced to take a local bus to Udomxai, a northern town that is a hub for transportation in the area. I would then overnight in Udomxai and pick up another bus to Phongsali in the morning.

Traveling during holidays anywhere but especially in developing countries will give you an instant adventure and be a lesson of patience and an opportunity for personal growth.

The local buses are not particularly comfortable especially if you are from the west and not used to the cramped conditions. People are crowded onto these buses. Once the seats are filled, out come the plastic chairs which are placed in the aisles for everyone else. Sometimes animals are transported, chickens usually. Portable meals.

A few young girls had jumped on the bus at the same time. There were dressed up and had obviously come down to Luang Prabang to watch the Pi Mai parade in their shiny sihns, the long traditional skirt worn by Laos women. I could tell it was a big day for them. They had taken an almost 5 hour bus ride from the little town they lived in to see Pi Mai and were still coming down from their day of enjoying the festivities.

But the bus was crowded, with not much in the way of air conditioning. What should have been a 6-7 hour bus ride turned into 9 hours, arriving at the Udomxai bus station at 2:30 in the morning. I knocked on a few doors of guesthouses near the bus station but either I was turned away or there was no answer. So with a couple of fast traveler friends I made on the bus we all hunkered down for a few hours of sleep at the bus station. A rough night with little recovery time in between long bus rides.

That morning the bus for Phongsali would leave at 8:30. A small minibus that seemed a little more comfortable. My timing for trekking in Northern Laos wasn’t as bad as it sounds. I was told that only a year earlier the road was not fully paved from Udomxai to Phongsali. But due to the huge hydroelectric dam project funded by China a road was built as part of the deal. It was still a long day, another 8 hour plus ride, but at least smoother and with a newer bus there was no need for frequent stops to prevent the engine from overheating, unlike the previous ride.

Finally by late afternoon I had arrived in Phongsali. A town with a completely different vibe to anything else I had seen in Laos. It definitely did not have a tourist feel, and there was no enclave of backpacker hotels and internet cafes. In fact I was actually put off at first having been refused service at one of the Chinese restaurants that was recommended in the guide book. This was not the Laotian hospitality I had become accustomed to. I found out later they would only serve locals and Chinese.

But I was there really for the trekking and not overly concerned with the lack of hospitality. After a meeting with my guide and an overview of the 3 day two night itinerary I was off to a friendlier restaurant and a good night sleep in my hotel.

I had read that the villages were always needing essentials so before we left the next morning I asked my guide Ma if there was anything I could bring as a donation. He suggested eye drops, as the villagers eyes become quite dry and sore from cooking smoke inside their thatched huts. We would also take a case of ointment for sore muscles as this is another chronic ailment found throughout these remote Akha villages.

After a short drive to the trailhead we were on our way. Everyone was still celebrating Pi Mai, Laos New Year and although we would not face the customary water-throwing on the trail we would be obliged to join in the festivities along the way and have a drink with local villagers.

Our first encounter was with a group of teenaged girls who were from Phongsali. They had decided to come up into the hills and have their own celebration at the side of the road. When we approached them they were busy building a fire to cook up some noodle soup. They were all dressed in western clothes, all wearing baseball caps. Since they couldn’t speak English I let Ma handle all the communication. It wasn’t long before a bottle of green liquid was pulled out along with some plastic cups.

The Lao Lao whisky is green in this part of the country from the added process of passing the distilled alcohol over raspberry leaves. We would toast Pi Mai, the first of many on this trekking adventure that was also becoming a drinking tour. In Laos you can never get away with just one toast with locals so every time we would meet up with someone we were in for a two drink minimum. They believe that since you have two legs you require a drink for each one.

As we passed through the next village we were greeted at the entrance by a family and some young men who were eager for us to try their homemade Lao Lao.

And so began the journey to remote Akha Villages. Following the same trails built by the French army during the Vietnam war. Enduring the extreme heat and the perils of jungle trekking and fording rivers. And along the way, toasting and celebrating with local villagers and hill tribes people, the Laotian way! Sabaidee Pi Mai! Happy Laos New Year!

That’s it for this week’s edition of Far East Adventure Travel-The Podcast, thanks so much for listening. Until next time this is John Saboe, safe travels and Namaste!