The Other Everest Base Camp – Tibet 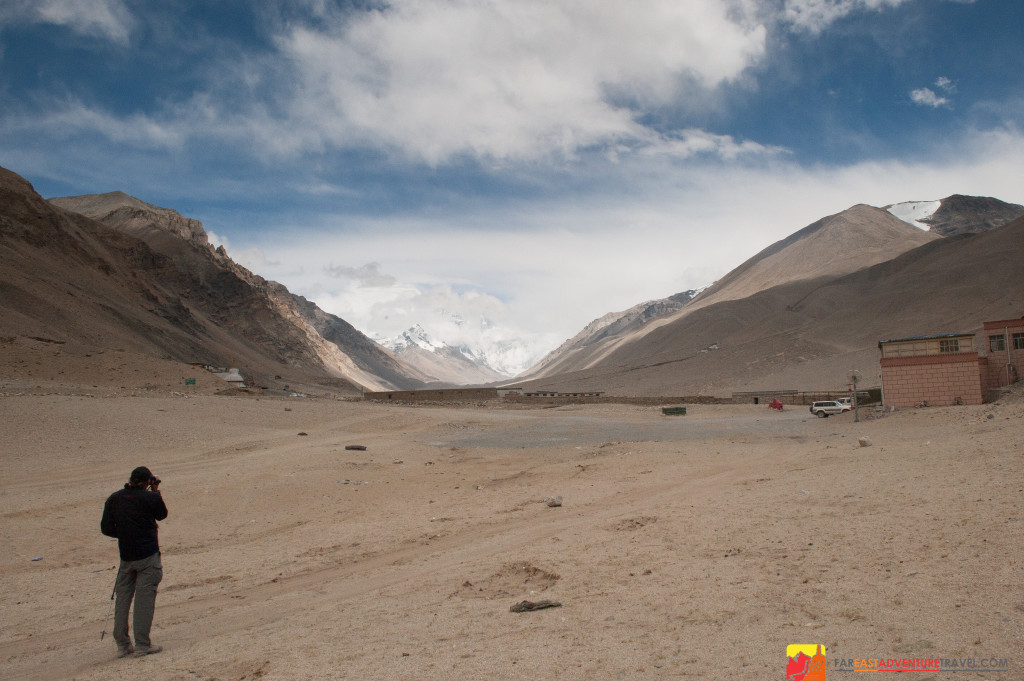 I trekked my ass off the last two days en route to Everest Base Camp Tibet. We averaged nine hours a day of walking. The days were great. I’ve never been to a more quieter spot on the planet. So easy to meditate… become one with yourself here. It really was true what other’s have said about this place.

Later the long days would help contribute to my bout of high altitude cough, or the Khumbu Cough. Khumbu is the name of the region on the Nepal side of Mt. Everest. Mine wasn’t an extreme case where you cough so hard you crack a rib. Just a dry cough that lasted about a month upon my return home. You’re more likely to get this if you stay at high altitude for a long period of time and/ or if you overexert yourself.

We never bumped into one foreigner trekking or touring in the area. In fact, we only talked to one other person while we were walking. A nomad lady. 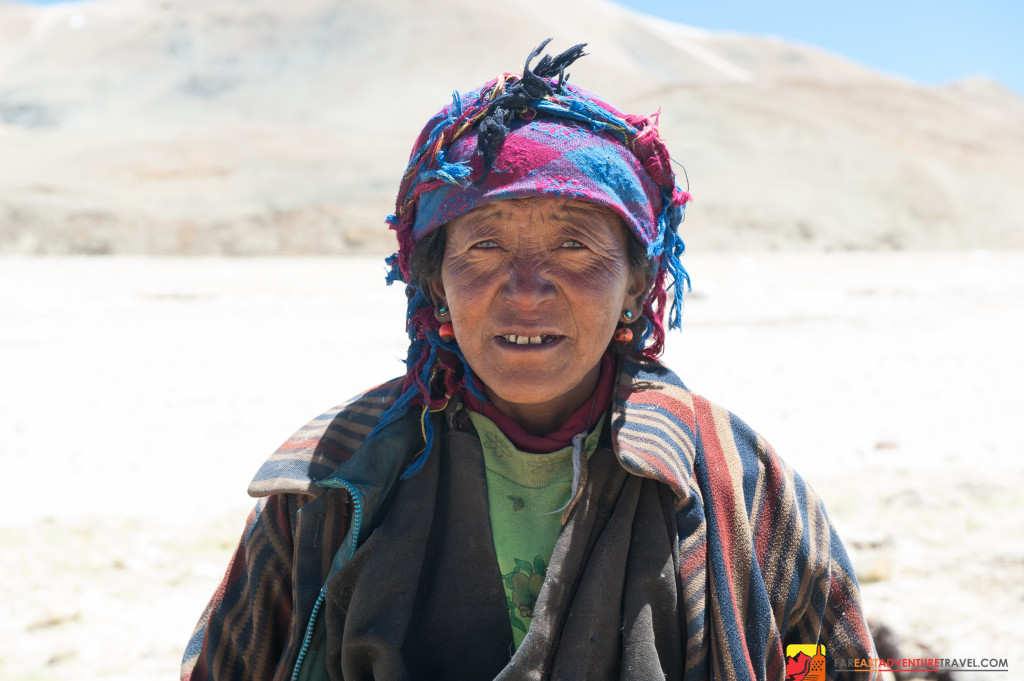 We stopped for photos with her. Norbu gave her some money to buy chocolate.

A couple of locals on old Chinese motorcycles passed by us as we were approaching Rongbuk Monastery, about eight kilometres below EBC, with their music blaring out of their smart phones. Only adding to the atmosphere I thought. No wildlife like I was hoping to see. No antelope. Just the usual livestock herds, sheep and goats. 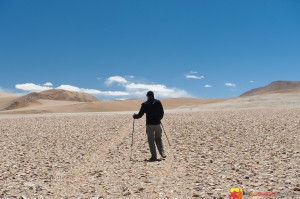 The toughest day was moving up the Lamna La Pass at 5200 meters.

The scenery is intoxicating and a good remedy for the lack of oxygen in the air. We were able to see some of the highest mountains in the world from here. Cho Oyu, Makalu, Everest.

The night before reaching Rongbuk and the first full view of the north face of Mt.Everest, we camped just outside the little village of Zommug. The winds that night were calm and I had the best sleep so far on this trek.

We left camp at nine the next morning. Norbu had talked about the option of a shorter day, stopping before we got to Rongbuk. We would then trek there the next day then all the way to Everest Base Camp. We agreed to push on to Rongbuk that day instead. The next morning we would have an eight kilometre trek to EBC. Then leave for Mt. Kailash. Probably the best decision we made on that trek. 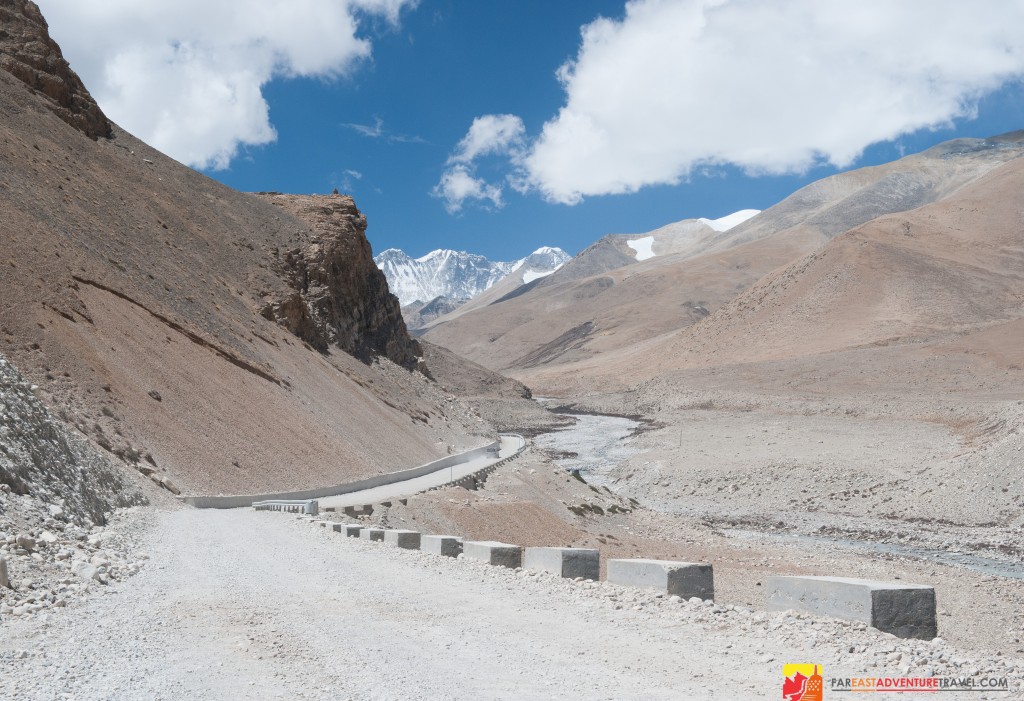 Once you move through this part of the valley you eventually join up with the road that leads to EBC. This is where you live in dust for literally hours, before you reach Rongbuk. 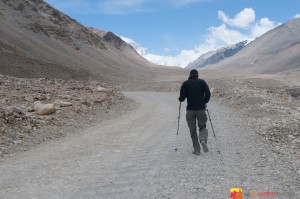 Your first full sighting of Mt. Everest will be as you walk along this road with the occasional truck or motorcyle passing by, feeding you dust.
As you wind your way up the road the large massif looms around the corner.
Then finally there it is, right in front of you. 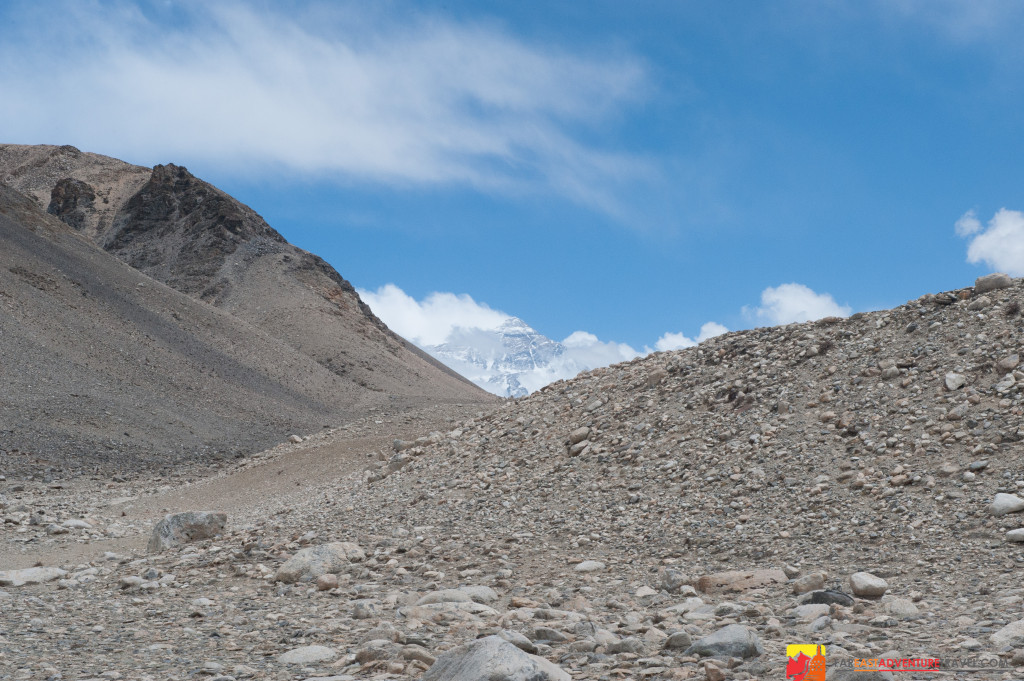 We could see all the way to the top. Norbu said we were lucky. He had been here many times without ever seeing the peak.

The clouds moved in to cover the pyramid like top. Then they moved out again. This happens continually. You really see how treacherous climbing this mountain could be.

Down below where we were the winds were strong. I was completely covered in dust. It didn’t matter. I was looking up at the tallest mountain in the world.

We could see the jet stream blowing a long tail of ice crystals off the top. The jet stream! We still had another hour and half before we reached Rongbuk. I didn’t take my eyes off Everest the whole time. 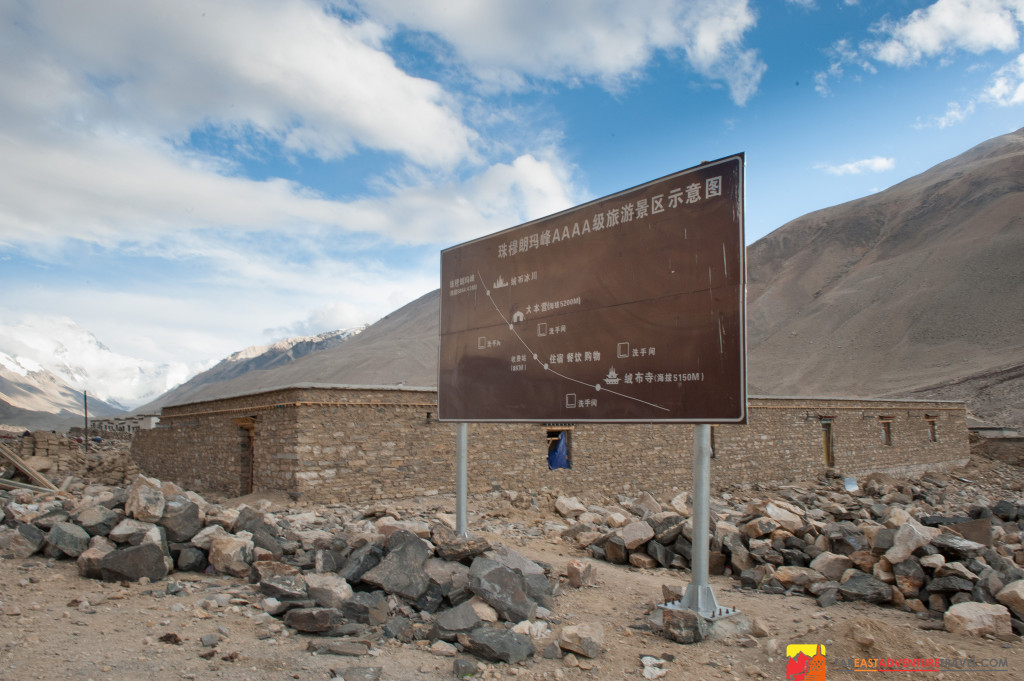 We made it into Rongbuk just after four that afternoon.There is no camping allowed in this area so Norbu gave me a couple of options. We could stay at The Everest Hotel or the tourist tented camp three kilometres up the road.

First off the Everest Hotel is operated by the government. It is not a hotel. It’s a hostel or guesthouse at best. The tented camp option sounded good at the beginning of the trip. Norbu described the tents as not too comfortable, smokey smelling and communal sleeping. Meaning you may have a guest that snores or makes other disturbing sounds lying next to you.

I’ve slept in many huts on mountains and in dorms. In these situations lack of privacy is not a problem. I always bring earplugs. However that night I decided I could use the better sleep and take a closet on the third floor of the hotel.

I’m not exaggerating, a walk-in closet with a single bed. It will do! But it’s on the third floor. There’s no elevator. Hey – It’s not like you’re moving up the Hillary Step, the last chunk of rock before the southeast summit on the Nepal side. However, at 5000 meters elevation it still feels like climbing!

The staff are kind enough to at least bring some hot water up to my room for me. When travelling in this part of Tibet and particularly Western Tibet unless you are in a larger city do not expect running water. You will be given one or two thermos’ of hot water and a basin to use for washing. I cleaned myself up as best I could and head down to the restaurant to meet Norbu and Sonum, our driver.

We ordered food. I had a simple dish of vegetable fried noodles. Honestly anything fried at high altitude tastes amazing and even feels nourishing. 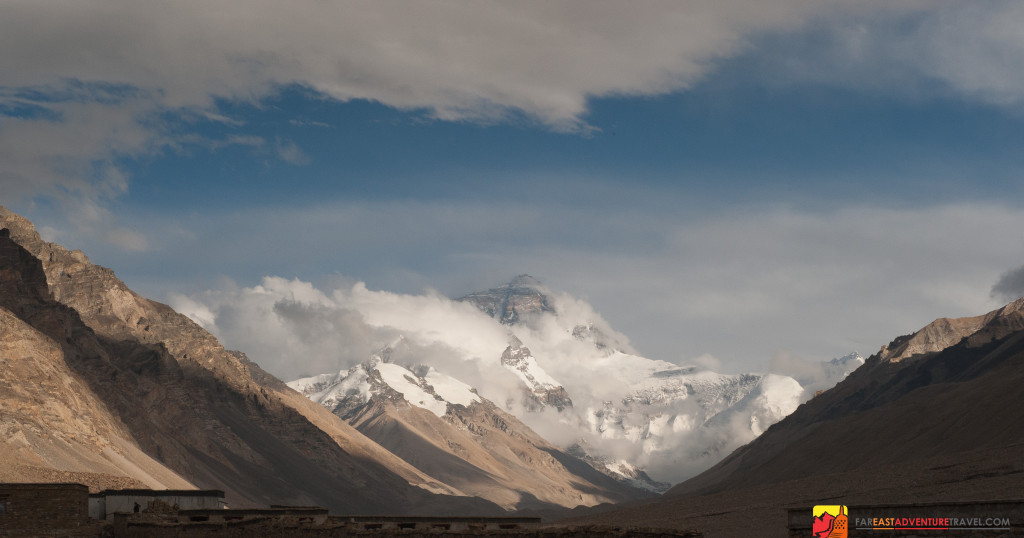 EBC The Next Morning

We talked about plans for the next day. We would head up to EBC at approximately 8:30. Spend some time there, then head down to the tented camp area where Sonum would meet us with the landcruiser. We would then start the drive through to Western Tibet and Mt. Kailash. A three day journey.

After our meal I headed outside to catch the sun going down and take some more pictures of Everest and The Rongbuk Monastery.

The winds had calmed down slightly and it was good time to move around this area. The Monastery is famous for being the highest one on the planet. By 1974 it had been completely destroyed but it’s now rebuilt. It’s small and only a few monks and nuns live here. 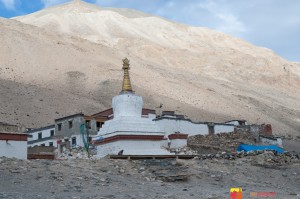 This is the same monastery that British mountaineer and explorer George Mallory and his climbing partner Sandy Irvine visited in 1924 before the start of their failed summit. Both Mallory and Irvine, with the rest of the team including porters and sherpas, were given a Buddhist puja (ceremony), and blessings from the Lama (head monk), of the temple.

I am exhausted and head back inside to the restaurant for some fries. More fried food and bed.

The next morning I woke up at 7:30. My room was small and cramped but it did have a small window. When I looked outside I couldn’t believe it. Snow everywhere, and it was still snowing. The whole area was covered in about one or two centimetres and the visibility was low. Low enough to completely shut out any view of Everest. I just laughed.

Here I had come all this way and I would not have a chance to see the highest mountain in the world from it’s base camp. The spectular view of the north face. A better view than from the Nepal side. Not today.

You realize when you’ve been traveling for awhile that not everything goes the way you want it to or expect it to. Much like life. You learn to become flexible and not attach yourself to a specific outcome. Someone once said the adventure begins when something goes wrong.

Nothing went wrong in this case. It just didn’t go the way I wanted it to.

I actually started looking forward to the hike in the snow up to base camp. A great experience and story I thought. Luckily we had made the decision to arrive at Rongbuk yesterday. I was relieved I had at least gone outside one more time the night before to take pictures. I would not have one picture of Everest this day. 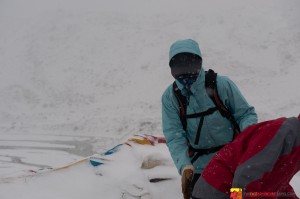 Norbu had never been here when it snowed. As we headed up the road he told me that he thought it was a great experience to be here when it was snowing and he was enjoying himself. So was I!

As we got closer to base camp we saw the yaks waiting in an open area. No one was advancing any further today.

We finally arrived at Base Camp. The camp was established by the British during that fateful 1924 expedition. It’s snowing, windy and looking unspectacular. A couple of old buildings and some army tents. No sign of mountaineering teams. They usually are a few hundred meters from here. You’re not permitted to go any further unless you have a permit to climb the mountain.

I was told you can get cel phone reception here. I tried making a couple of calls with no luck.

There is a small hill where people hike up for their photo ops with the north face in the background. Today it’s a white blanket in the wind and snow. Norbu says to go ahead, when out come a couple of Chinese soldiers from the tent closest to us. One motioned me to stop and then asked for my passport. After the routine check I’m allowed to go. 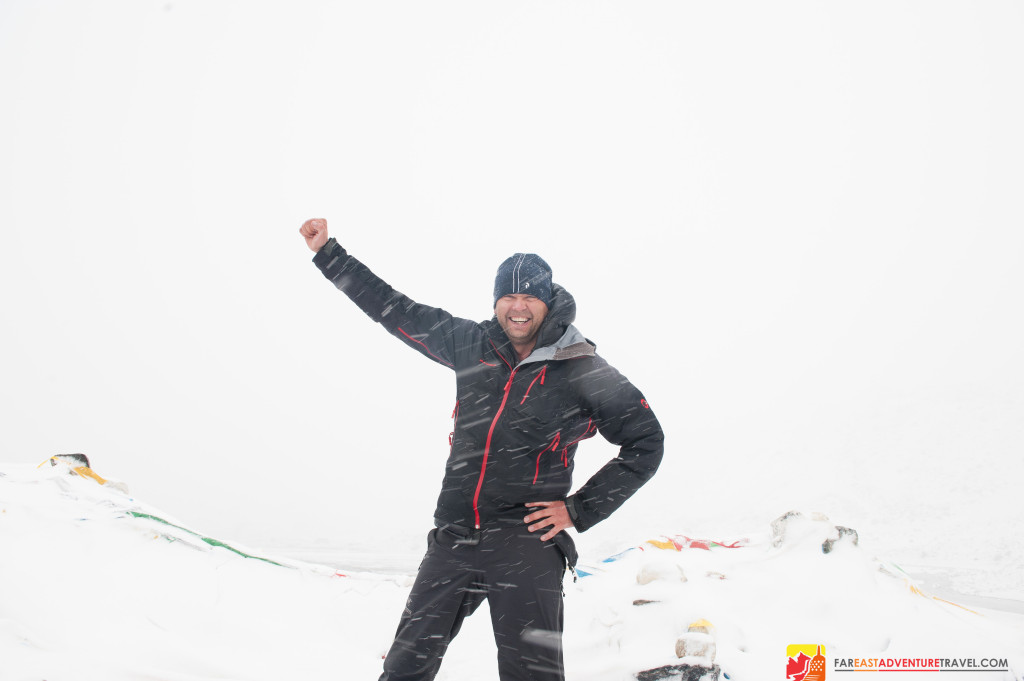 I make my way up the hill where there are some Chinese tourists taking pictures with a lone soldier. I asked one of them to take my picture and they oblige. While they went down the hill I stayed up a few more minutes to take this all in, view or no view. I was able to see some tents on the other side of the hill where mountaineering teams were camped. Prayer flags, colored rectangular cloth used to bless the area, flapping in the wind.

The soldier stayed with me the whole time. They obviously don’t mess around here. I learned that if you were able to get past the guards and go beyond base camp there’s a steep fine if you get caught. I don’t see any opportunity to get past these armed soldiers. Who would be stupid enough to try?

I finally hiked down the hill. I had taken my gloves off to take some video and pictures and they were now numb. Norbu and I hiked back down to the tented camp area where Sonum met us with the land cruiser. We see a couple of yak men with their herd heading up the road as we start the drive back to Old Tingri and beyond to Mt. Kailash. Through a white covered landscape.