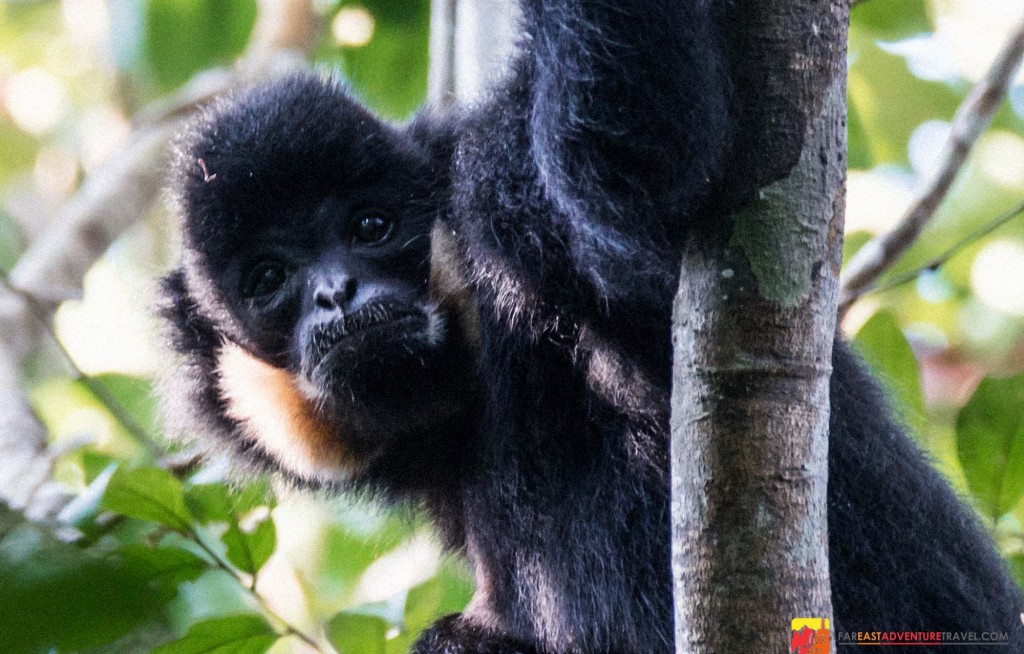 In this episode join me for one of the most exciting wildlife spotting adventures in Asia. I’m deep in the heart of Ratanakiri province in northeast Cambodia heading for the jungle and a chance to get up close to the rare northern yellow-cheeked gibbon. This week’s Far East Adventure Travel Podcast.

Ratanakiri province is located in the remote northeast corner of Cambodia, bordering Laos to the north and Vietnam to the east. I had come to this part of the country to trek into the jungle. My goal-to get up close to a group of Northern yellow-cheeked gibbons that have been habituated to human presence. It promises to be one of the best photographic opportunities of this ape species in the world.

Before I get back on the bike though I’m taking a break from the dusty roads and joining some loals in a nice cold refreshing glass of sugar cane juice.

Veun Sai is located 38 kilometers north of Banlung, where we started the journey. It was about a 30 minute wait before we would cross the Tonle San River by ferry. Another hour ride past a Laos village then onto the camp where we’ll spend the night before trekking into the jungle early the next morning.

Ratanakiri means “hill of the precious stones”. Zircon and other semiprecious stones are mined here. The cultivation of rubber trees, cashew, and coffee crops is growing at an exceedingly fast pace. On my way to Banlung I saw many rubber tree and cashew plantations. The cost of this growth is of course loss of land and habitat for indigenous plants and wildlife.

The Gibbon Project is a very worthwhile undertaking as it not only helps to protect the gibbon but the forest and habitat as well. Money raised from the tours like the one I’m on goes back to the local villages as an alternative resource to the logging of the forest.

I was very excited anticipating the opportunity to get up close the gibbons that inhabit the area. I had been to another Gibbon conservation area in Northwest Laos, where visitors zipline into the jungle and sleep in treehouses in order to get a gibbon experience, specifically to listen to their high pitched singing in the morning.

This visit in the jungle would be completely different. The adventure here was the chance to get closer to gibbon families than any other kind of experience offered in Southeast Asia.

Our last stop before the Conservation Camp was this Laos Village. Tourism from the Gibbon project helps support the people of this community with alternative resources of employment and revenue. Energy? They have plenty of that, as you can see.

Although resembling monkeys slightly in appearance gibbons are part of the ape family. Their habitat ranges from Eastern Bangladesh and Northeast India all the way to Southern China and Indonesia, including most of Southeast Asia. Gibbons are also called lesser apes. They are the fastest tree-dwelling mammal in the world swinging from tree branches at top speeds of 55kmh and can make leaps up to 8 meters in length.

This camp is staffed with park rangers and armed military who all serve to protect this area of the jungle. I will sleep in a hammock outside with a built in mosquito net. This is a high risk area for Malaria so I’m taking all necessary precautions including bug spray and anti-malaria pills. It had been a long day filled with bump dusty roads that were so dry in places they had transformed into sandpits. Getting off the bike and walking was necessary. Time to get ready for bed and an early rise.

Oh wait a minute, I forgot a nightcap before bed. Mr. Koko, my guide brought along some of his famous home-made rice wine he insisted I try.

We walked for about an hour into the forest and jungle before we finally found a place to wait for the singing calls of the gibbon.

All gibbon species produce loud singing calls that can last as long as 30 minutes. The male instigates the singing usually in the early morning from the high tree branches of the forest or jungle. Singing is used as a way to bond as a family unit, for mate pair bonding, defense and other purposes.

Hearing the first calls and making our way through the jungle was a totally exhilarating experience. The ranger and guides that were with us had no problem finding the family we were trying to spot that morning. We could also hear other gibbons in the distance. The jungle felt like a huge opera house full of gibbons.

We finally found ourselves directly under the trees where the family unit was located. As they had just started their singing they were high up in the trees and extremely hard to view at this point.

We were accompanied by Navon Hon a master of science in ecology and biodiversity who was born in Banlung, Cambodia. He was with us to continue his studies of the northern yellow-cheeked gibbon and shared with us the species main food source here.

After their morning singing calls the gibbons started their sourcing of food climbing down from the higher branches. This was the first male we were able to spot.

It was the beginning of an absolutely amazing spectacle of their agility- swinging from branch to branch at breathtaking speeds. I was in awe enjoying the moment while capturing these images.

Sometimes when a gibbon swings, it’s wrist will naturally dislocate until it’s finished it’s swing. A mechanical function of the gibbon’s anatomy. It’s wrist operates like a ball and socket joint. It’s movement through the trees is impressive and inspiring.

At birth all northern yellow cheeked gibbon are blond in color. The male species coat will eventually turn black, with blond marks on the cheeks. Females remain blond in color. This one, though hard to see, was carrying a baby.

I asked Navon who is studying this species of the gibbon family why it’s so important to protect and support this habitat, how long it took to habituate the gibbon families in the area and why the Gibbon Project is a great way you can help to protect the species and sustain the surrounding local communities.

I asked Navon what happens to the money raised from the Gibbon Project?

This was one of the most exciting wildlife encounters I’ve ever experienced. Rising early, trekking into the jungle in the dark, waiting for the first morning singing calls, then running through the trees while watching the gibbon family swing at high speeds from branch to branch. To be so close to the natural habits and movements of the gibbon was absolutely thrilling and one of my most memorable experiences in Cambodia.

That’s it for this episode. Thanks so much for joining me. Until next time this is John Saboe. Safe travels, and Namaste.