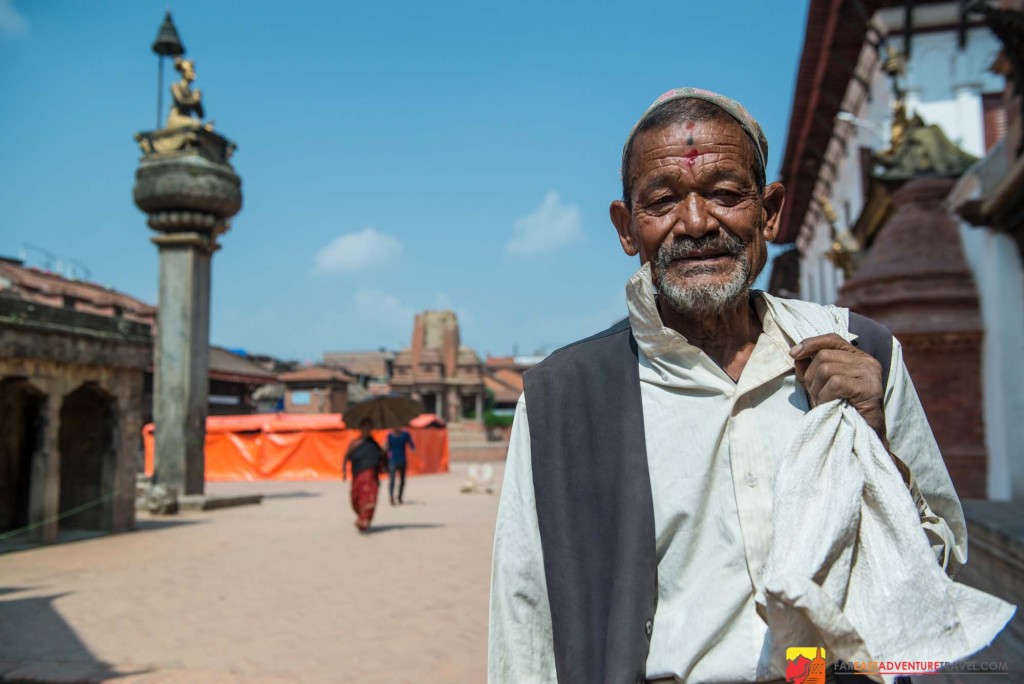 The giant chariot that carries Bhairab during the Bisket Jatra was still sitting in the square from the festival held in April this year.

The Bhairabhnath Temple when first built in the early 17th century was only a one storey building. King Malla added an extra storey in 1717 and a 3rd storey was added when the temple was rebuilt in 1934 after that year’s massive earthquake. It appeared to have withstood most of the force of the 2015 earthquakes.

Tachupal Square was the original central square of Bhaktapur and includes some important temples that again, appeared to have weathered the force of the earthquakes with little damage.

Dattatreya Temple was originally built in 1427. At the main entrance you are met by two Malla wrestlers, the same ones that guard the 5 storey Nyatapola Temple in Taumadhi Square.

Right around the corner from the Woodcarving Museum of the square, once a home for Hindu priests you can find one of the most famous carvings of the Kathmandu Valley, the Peacock Window. I had witnessed many beautiful wood fixtures that home owners were salvaging from their crumbled homes and I was curious to see what state it was in after the earthquakes. I found many alleys around Tachupal Square suffered severe damage. Protected by many supports the window looked completely intact.

Most streets showed signs of damage from the earthquakes with crews tirelessly working to breakdown and clean-up the buildings that were too damaged to repair.

Everywhere I went there were signs of destruction, and at the same time miraculously important religious shrines and buildings appeared to have been unaffected by the earthquakes.

In Bhaktapur’s Durbar Square the Vatsala Durga Temple made out of stone was completely destroyed by the April 25th earthquake.

Although the square saw other temples destroyed there were still many buildings left standing, some now serving another purpose.

I spoke with a local guesthouse operator whose family has lived in Bhaktapur for several generations about the current state of the town.

It will take several years to rebuild this historic town but life and the culture of Bhaktapur will continue on despite the crumbled buildings and difficult living conditions.

That’s it for this week’s episode, thanks so much for joining me. Until next time this is John Saboe. Safe travels, and Namaste!