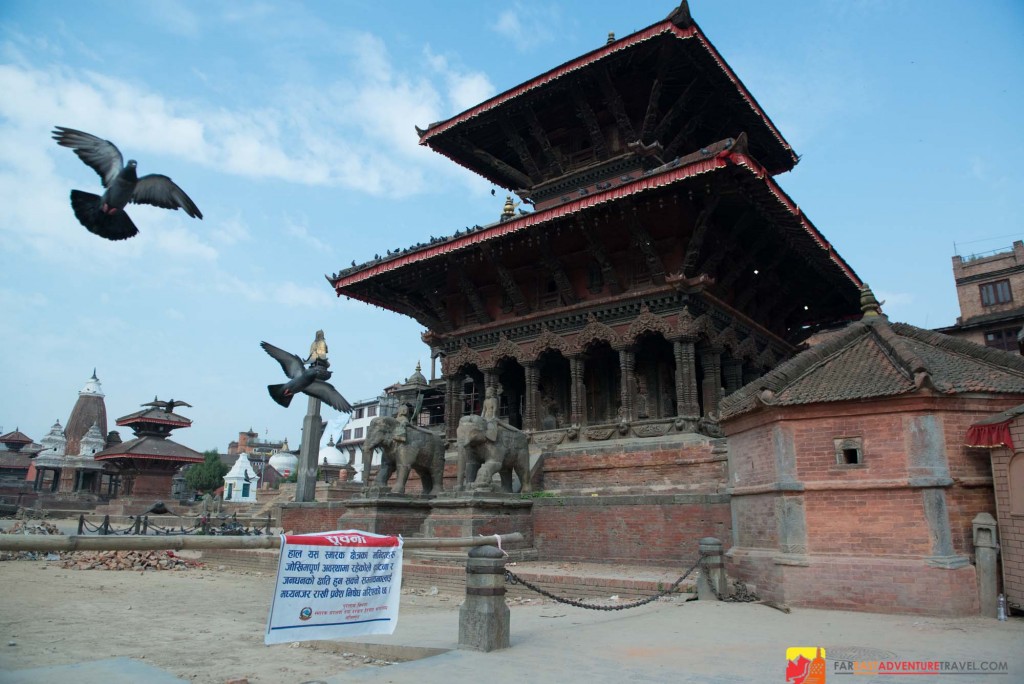 Patan’s Durbar square is one of three royal squares in the Kathmandu Valley. Kathmandu and Bhaktapur’s squares were also affected by the earthquake with Bhaktapur receiving the most damage.

Nepali army was seen around the square securing the site and keeping the public out. Many of the artifacts were recovered from the debris and were being kept inside one of the palace’s courtyards.

Some of the buildings still left standing with supports. This is a familiar site all over the Kathmandu Valley. Fortunately these ladies always seen in the square selling food for the pigeons were able to set up shop just outside the square. The pigeons conveniently moving as well.

Some buildings were completely destroyed in the earthquake, but several important structures still remain. Like the Vishwanath Temple and to the left the Krishna Mandir constructed of carved stone.

The tank just off the square that supplies the townspeople with water for everyday use. Many homes do not have running water in the Kathmandu Valley.

One of the oldest and longest running festivals in Patan is the chariot procession known as the Bunga Dya Jatra or Rato Machinndranath Jatra. The festival honors Machinndranath, and the guru of Gorakshanath with whom he founded the school of hatha yoga. He is revered by both Hindus and Nepalese Buddhists. He also known as the God of rain.

The chariot festival is held every year before the monsoon in order for the city to get a good rainy season ensuring plentiful crops. This year due to the earthquakes the festival was not on schedule, as well it was more difficult to pull the chariot through Patan as part of the ritual because of damage to the town. I spoke to a local jewellery craftsmen who works and lives in Patan about this year’s festival.

During the festival another chariot carrying the deity Minnath is constructed and the two chariots eventually meet up. We found the second chariot or daughter chariot this year still near the town of Bungamati. Because of the numerous aftershocks, for safety, the organizers were advised not to move the chariots until there was no earthquake or aftershock activity for four consecutive days.

Life goes on in the town of Patan with prayers and blessings for the upcoming rainy season and hopes of moving on after one of the most devasting natural disasters in the history of Nepal.

That’s it for this week’s episode. Thanks so much for joining me. Until next time this is John Saboe. Safe travels and Namaste.