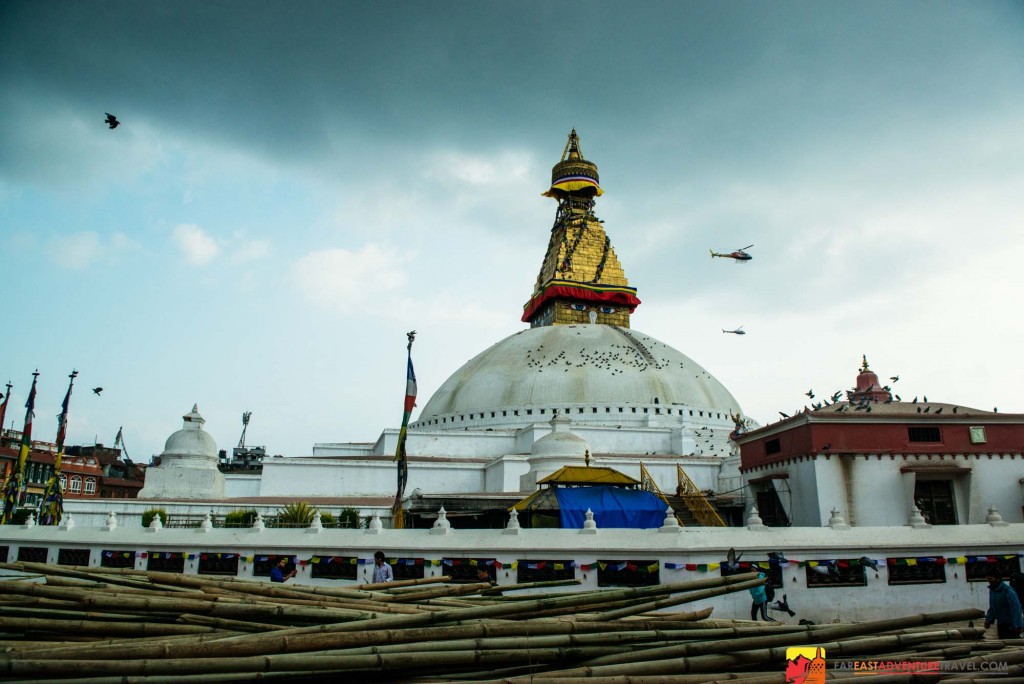 Helicopters fly over the Boudhanath Stupa in Kathmandu, Nepal as workers hurry to finish repairs from the April 25th earthquake

It is one of the great pilgrimages of South Asia-Boudhanath, in Kathmandu, Nepal. It is the largest stupa in Nepal and one of the largest in the world. I wouldn’t think of visiting the Kathmandu Valley without a return to this great Tibetan village.

On this latest visit I was anxious to see what condition the stupa and village was in after the first earthquake on April 25th.

Upon arriving at one of the gates into Boudhanath I immediately noticed that the ticket booth where foreigners pay the entrance fee was closed, a sign I thought that the village might not be in good shape. Kathmandu’s Durbar Square which had several temples and buildings damaged also had closed their ticket booths. Patan’s Durbar Square simply closed off the area to everyone.

Once I had a chance to walk through the village I noticed very little visible damage except for some brick tiles that were being replaced by a crew around a portion of the stupa. This closed section forced the Buddhist followers who circle the stupa clockwise daily to detour through part of the village to complete their circuit.

In this video podcast, from a previous Periscope live stream, I go for a walk around the world-famous stupa with the Tibetan Buddhists of the local community who chant their mantras and spin prayer wheels daily for good karma.