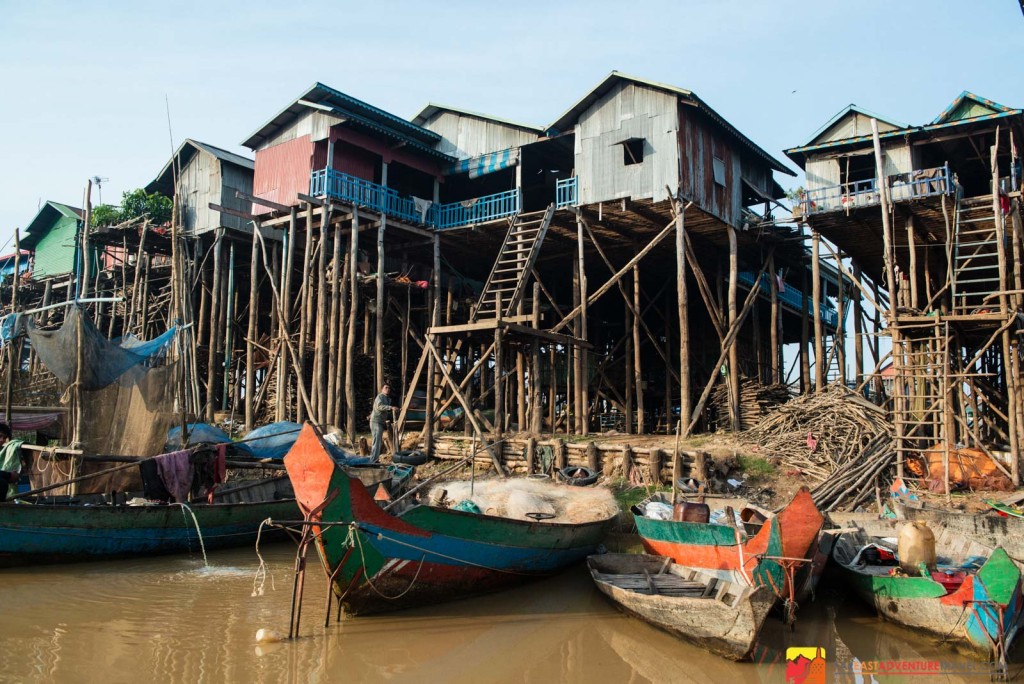 Kampong Phluk Stilt Village seen during the dry season. In wet season these homes will appear to float due to the substanial increase in the water level

Hello and welcome to another edition of Far East Adventure Travel The Podcast. I’m John Saboe your host traveling through Cambodia. In this week’s episode. The spectacular Kampong Phluk floating village.

The Tonle Sap is the largest fresh water lake in all of South East Asia and provides more than half of the fish consumed in Cambodia. Many floating villages, and communities made up of houses raised on giant stilts depend on the resources of the lake as a way of life. Intertwined with the rising and falling of water levels.

From Siem Reap it’s approximately 15km to the lake, about 20 minutes or more by tuk tuk. It all depends on the time of year. If it’s the wet season, it’s long and sometimes the routes are restricted or just unbearable to drive. I’m here in the dry season so it’s not so bad, until you hit the dirts roads, then it’s bumpy. My driver Davin has a tough go with dodging the dips in the road and constantly checks to make sure his bike is OK.

Chong Kneas is one of the most famous floating villages of the area and is close to the boat ride that takes you to Battambang. I’ve decided to travel to another village Kampong Phluk instead. It’s a little more out of the way at about 40km from Siem Reap but less touristy, although there still is an air of commercialism with floating restaurants and dugout boat rides through forests of sunken trees. I also left Siem Reap early in the morning so as to avoid bumping into the large groups that still manage to make it out this way.

Tonle Sap Lake is quite small during the dry season from November to May with a 1 meter depth throughout the lake and an area covering 2700 square kilometers. When water is pushed up the Mekong River where it converges with the Tonle sap at Phnom Phen the lake increases in size to 16,000 square kilometers with a depth of nine meters. The expansion results in a perfect breeding ground for fish. It’s at this time of year that fishing is banned so as to allow for an abundant season. When dry season returns fishing resumes often with one side of the river full of house boats, the other side left free for navigation.

You will see the many ways in which the people of the Tonle Sap catch fish including these nets set up in the river. Cone shape fish traps are also used along with throw nets that are tossed while wading in the water.

This village will look drastically different in the wet season when these houses built on the massively tall stilts, appear to float. There are also other living quarters that are true float homes or houseboats that go with the ebb and flow of the water and are not fixed to the ground in anyway. Kampong Phluk is a stilt house village.

In the middle of Kampong Phluk. During the wet season the only way through this part of the village is by boat. This street will be completely flooded.

We were trying to get these children we came across in the village to sing us a song. No luck. Often you will see children as young as these ones helping out the family with the daily duties of fishing.

We then left the village to continue our ride out to the great Tonle Sap Lake which lies within the territory of 5 provinces in Cambodia. With it’s abundance of fish it’s by far the number one source of protein for the country.

If you’re willing to shell out another 8 dollars or more you can take a dugout canoe ride through this seemingly sunken forest which expands right through to Kampong Phluk during the wet season when it’s even more atmospheric I’m told.

We headed for one of the floating restaurants on the lake that serve everything from crocodile to snakes. I will end up settling for one of the 149 species of fish found in the lake.

Meanwhile back in Siem Reap I met a tuk tuk driver with an inventive and interesting way of standing out from the rest of the other guys in town.

I’m talking to a guy who’s pimped out one of these vehicles that’s basically a motorcycle with a carriage harnessed to it. Boray explained to me the set up in the passenger area.

Amazing. If you want a different experience riding a tuk tuk around Siem Reap contact Boray. Trust me it’s not hard to find him around the Old Market area.

Back on the river we left The Tonle Sap and the Kampong Phluk floating village for Siem Reap. I thought this was definitely worth the time and a great way to break up some of the visits to the Angkor Wat ruins when you’re staying this part of the country. The trip will run you about 20 dollars per person for the boat ride, more if you’re on your own plus the tuk tuk fare.

More on The Tonle sap:http://en.wikipedia.org/wiki/Tonlé_Sap