I was staying in Battambang, Cambodia. While I was there I had to visit one of the area’s most famous attractions, the bamboo train. The bamboo train gets it’s name from the bamboo deck or floorboard used that rests on top of the wheels that can transport anything from chickens and rice to people. In Khmer it’s called a Lorry and has been used since the Khmer Rouge shutdown of most regular train service in the country.

The Bamboo Train Station. Now where is the first class lounge? I could use a bloody mary about right now! Waiter? Actually the place is quite charming and surprisingly not touristy feeling at all. At least not at the starting point in O Dambong, about 4 km from Battambang.

The bamboo train solves the biggest problem of a single track train line. What do you do when two trains meet from opposite directions? In the case of the bamboo train? Simple-move one off the track. This experience alone makes this one of the world’s all time great train rides.

A little heavy on the photo gear I know but I’m a one man show right now.

Farewells from the departure crew and we’re off.

The bamboo train was not the first flatbed type service in Cambodia. During the civil war of the 80’s and 90’s flatbed trains were used as mine sweepers ahead of the rest of the train. Service was free, risky but popular. 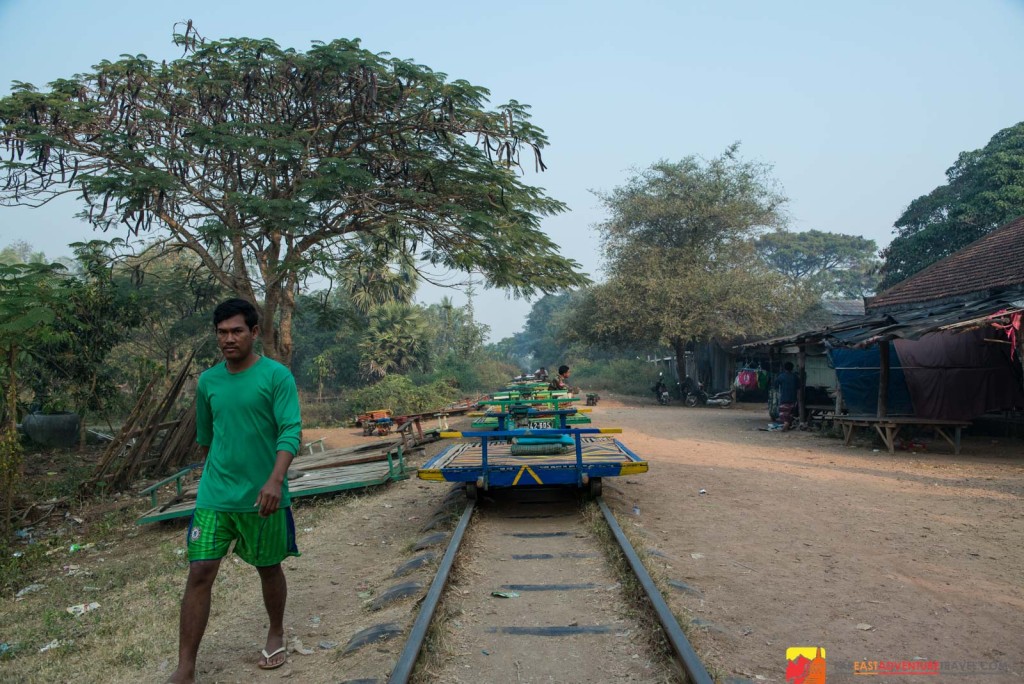 And here we go about 3 minutes into the ride and our first stop. Wow, now that’s taking service station to the next level. The first lorries or bamboo trains were actually hand driven with a pole, kind of like an Italian gondola. Small motorcycle or tractor engines, like this one were added later. The wheels? They’re actually from abandoned tanks! Yes get your ass off the deck so I can do my job, thank you!

Once again we are rolling on the tracks. The ride lasts almost a half-hour each way starting in O Dambong with a short stop in O Sra Lav before returning.

The tracks are not in the best of shape with little or no maintenance for decades making them warped and misaligned. Occasionally you’ll get a strong bump from a really weak section, but hey it’s all part of the charm.

It is just after 7am and I think this is a perfect time to come-with the sun just rising and cool comfortable temperatures. The atmosphere is amazing and feels like you’ve been dropped into an Indochina themed adventure movie.

Cambodia’s first rail line was built by the French in the 1930’s. By 1969 the rail system was still in good shape but the civil war of the 1970’s soon saw some of the line destroyed. By 2008 passenger service was completely discontinued. Private interests currently hold the concession to the railway with only freight operation running between Phnom Penh and the coastal town of Sihanoukville.

We are slowing down because another train is coming our way. The rule is the car with fewer passengers gives way to the other car. So if you want priority service bring a group or give some locals a free ride.

Finally after a ride with stops that lasts just under 30 minutes we arrive at O Sra Lav. Here’s where it gets a little touristy, with the usual t-shirts, scarves, and kids selling bracelets. But that’s OK, they’re just trying to make a living and the people are always friendly here even if you don’t buy.

Like this man kindly showing me the way. Ten minutes later we are back on the tracks and heading back to O Dambong.

Sometimes so-called tourist attractions are spoiled by being over commercialized eventually losing the charm that originally made them attractive. For me the bamboo train is an absolutely original experience. Pieced together with leftover tank wheels, tractor motors, and eco-friendly bamboo, it’s the ultimate transportation mutt making it one of the world’s most original travel experiences.