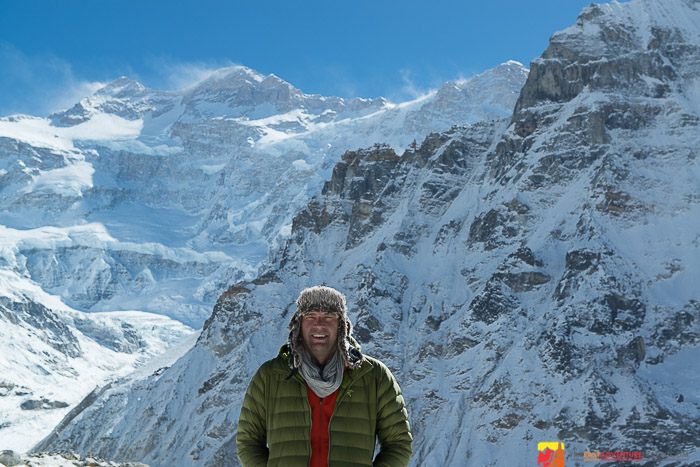 On November 14th in Nepal we made it to the north base camp of Kanchenchunga, the third highest mountain in the world. The trek wasn’t without surprises. It started on the first day of our itinerary.

After a 45 minute flight from Kathmandu we were ready for the long drive to Taplejung Nepal where we would start our trek to the north base camp of the world’s third highest mountain, Kanchenchunga. Diwali, the Hindu festival of lights, was winding down but the drivers were fierce in their pricing. No one wanted to drive us unless they made a huge profit during the holiday. So we sat around the airport at Biratnagar until our trekking company found a car for us. Finally three hours later we were on our way. That’s when the fun began!

I was crammed in the backseat of a small car heading for one of the windiest roads I’ve been on in awhile. The first hour and a half was tolerable. After that it was terrible. A combination of hairpin turns and aggressive driving in the dark made for car sickness I hadn’t experienced since childhood. After about two hours on the road I was tapping the shoulder of our driver to pull over. I couldn’t believe it. On the one hand I felt like I was in some mystical place. Hindu man arm in arm walking past me singing songs in celebration of Diwali. But I was crouched over on the side of the road heaving, loudly! What was happening? This part wasn’t mystical. On the side of the road in the mountains, puking, hopelessly waiting for this horrible form of worship to end.

Finally after driving a little further we found a guesthouse to spend the night. It was nice when the motion stopped. I felt a little better. I even got up the courage to have a little noodle soup. It helped a lot.

After our dinner we were joined by some men who wandered in to the dining hall to sing and dance in celebration of Diwali. They were a nice group. Lots of fun and great exchanges. What I found out next kind of blew me away. They were all from the Nepali Police Special Unit. In the area to make sure things went smoothly before the upcoming election.

It certainly took my mind off the car sickness and the frustration of trying to find a vehicle for hire earlier in the day. A bunch of cops singing and dancing. Only in Nepal! A pretty special moment that truly warmed by heart. More to come…. 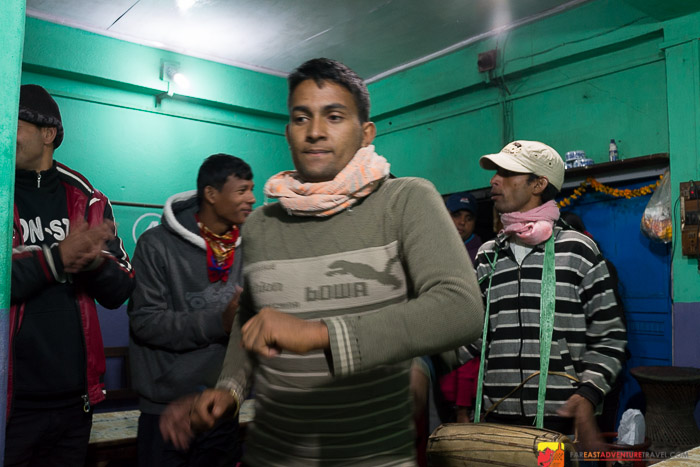 Nepali Special Police Unit singing and dancing for us