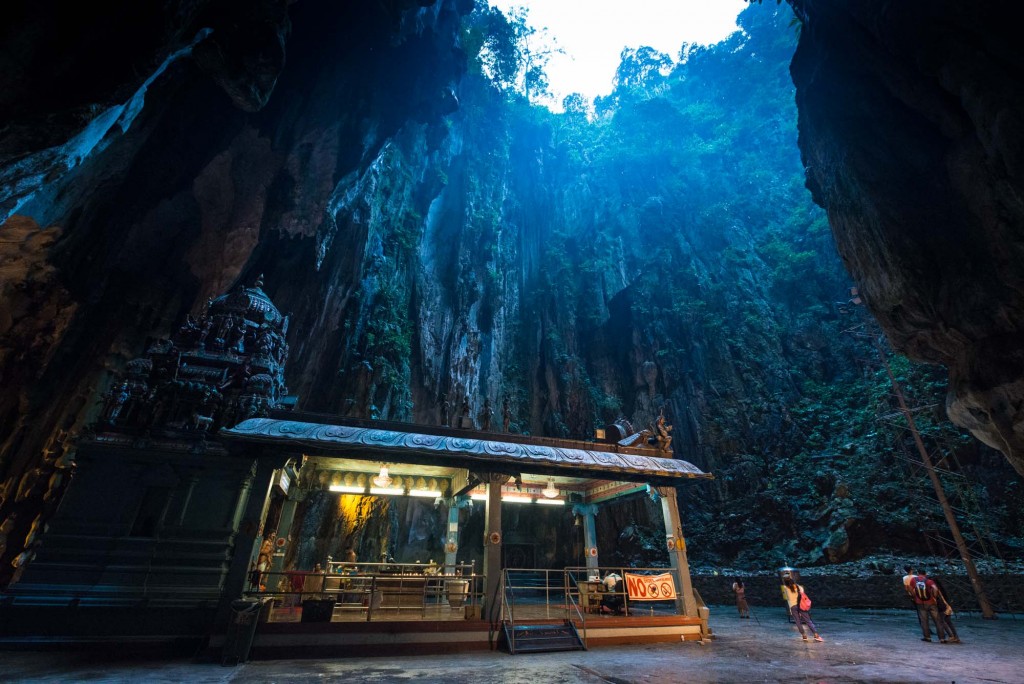 Inside the Cathedral Cave or Temple Cave of the Batu Caves , a natural limestone outcrop with one of the most popular Hindu Temple sites outside of India-located in Selangor, Malaysia

The Batu Caves are a series of limestone caves and cave temples located in Selangor, Malaysia. So easy to get to it even has it’s own train stop.

I picked up the KTM Comuter train at KL Sentral in Kuala Lumpur which can be reached via the Kelana Jaya line if you’re staying near KLCC.

In less than 30 minutes the giant limestone outcrop was in view.

Leaving the train station you are immediately surrounded by Hindu shrines and temples including this giant statue of Hanuman, the Monkey God.

The Batu Caves gets it’s name from the Sangai Batu, the nearby Batu River, and it is also the tenth, Pattu in the Tamil language, limestone of Ampang Malaysia.

The Batu Caves are one of the most popular Hindu Shrines outside of India. Dedicated to Lord Murugan, God of war. He is the son of the Hindu dieties Shiva and Parvati.

The Murugan statue is the largest statue of a Hindu deity in Malaysia and the second tallest in the world coming second to the Kailashnath Mahadev Statue in Nepal.

This is the site of the annual Thaipusam Festival which draws over 1.5 million people every year to honor Lord Murugan. Devotees among other things carry containers of milk as an offering to Murugan.

The first steps to the cave were built in 1920 made of wood, since then they have been replaced by 272 concrete steps. There are several caves throughout the site but the Temple Cave or Catherdral Cave, which I was climbing up to is the most well-known and visited.

Another reason to keeps things inside your bag or backpack on your way up. This guy eventually got back his little pack minus a couple of things.

As it tend to rain often it’s a good idea to bring an umbrella and watch the steps. This Hindu priest heading up doesn’t seem to have an issue with either the climate or the stairs.

At the top of the steps an entrance full of colorful deities greets you in the same tradition of Hindu Temples in South India and Sri Lanka. Below the giant limestone opening to the caves another statue of Lord Murugan, a Hindu God tradtionally worshipped in areas of Tamil influence including South India, Sri Lanka, Indonesia, Malaysia and Singapore.

Once inside there are a further set of stairs that lead to the giant Temple Cave. These caves were believed to be formed over 400 million years ago. Chinese settlers first started harvesting gauno from the caves as early as 1860 for fertilizing their vegetable gardens.

They didn’t become well-known until they were recorded by American naturalist William Hornaday in 1878. K. Thamboosamy Pillay a prominent Malaysian of Tamil origin lead the establishment of the Batu Caves as a place of worship for Hindus. The first Lord Murugan statue was placed inside the Temple cave in 1891.

There are several undeveloped caves located below the temple cave including the dark cave, a two kilometer network of caves rarely visited due to its restricted status by the Malaysian Nature Society. The caves feature stalactites hanging from the ceilings and stalagmites jutting from the floor with features such as cave curtains that took thousands of years to form.

Even though the Temple Cave is fully developed with floors, shrines and stairs it is incredibly impressive and quiet possibly one of the most unique places of worship in the world.

Thaipusam held during the full moon in January or February is probably the most spectacular time to see Hindus worship when some devotees through sacrifice and an offering pierce their skin, tongue or cheeks with skewers attached to a kavadi attam they pull. Others will simply carry a pot of milk on their head as an offering. Other celebrations, daily pujas or prayers take place most often the rest of the year.

The Batu Caves have also become a rock climbing destination in Malaysia over the last 10 years. There are more than 160 climbing routes with most crags starting from the ground. Several local adventure companies can arrange trips and equipment.

The giant statue of Lord Murugan, the vast caves, a spiritual center that integrates with nature. I don’t think there are too many places that capture the culture and beauty of Asia in one place quiet like The Batu Caves in Selangor, Malaysia. For Far East Adventure Travel this is John Saboe.