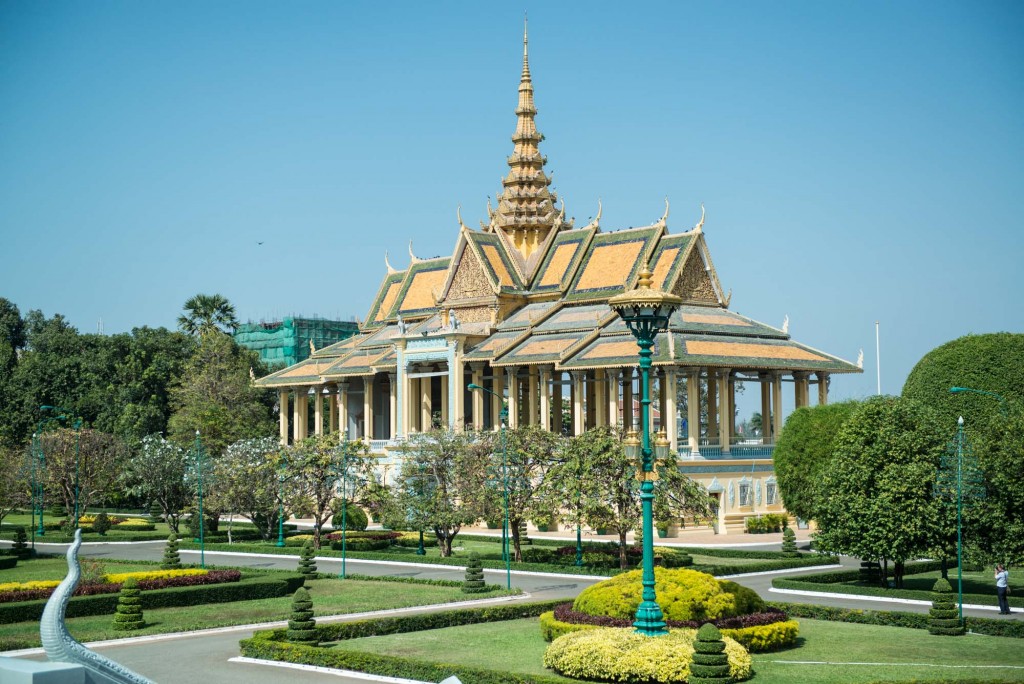 The Jade Palace in the Royal Palace complex is one of Phnom Penh, Cambodia’s top sites to visit

Phnom Penh has been the capital of Cambodia since French colonization. It is the country’s largest city with a population of over 2 million. It’s the center of commerce, the arts, cultural heritage and diplomacy. Once called “the pearl of Asia” it was one of the most beautiful French built cities in Southeast Asia. It’s riverside stretches along the Mekong River converging with the Tonle Sap.

Phnom Penh has had several terms throughout the centuries as the capital of Cambodia. Depending on which king was in power the center of control shifted to various cities but became the permanent capital under King Norodom l’s reign from 1866, where the royal palace was built and is still located today.

The monarchy operates in the same manner as the United Kingdom, in Cambodia a king that reigns but does not rule. The current King of Cambodia Norodom Sihamoni reportedly spends most of his time living in France.

During the Vietnam war Cambodia was used as a base by the North Vietnamese and Vietcong. As a result many refugees fled from Vietnam swelling the population of Phnom Penh to somewhere between 2 and 3 million by 1975. When the Khmer Rouge gained control of the country in 1975 and began their genocide of the population they forcibly evacuated the city with only officials of the party and army remaining. When the Vietnamese drove the Khmer Rouge out of Phnom Penh and power in 1979 people slowly returned to the city.

Riverside is a wonderful place to visit in the mornings when the streets are busy but the crowds are absent from the boardwalk. In the evening a stroll here before sunset is great way to segue the night into a happy hour visit to a bar overlooking the Mekong like the famous Foreign Correspondent’s Club.

Tuk Tuks are a cheap and easy way to get around the city. But beware of bag snatchers, who work in pairs on motorbikes often snatching bags and valuables as they pass by.

My first stop is the Russian Market, named for the many Russian expats who shopped there in the 80’s.

It is absolutely jam-packed with stuff. As Cambodia is a manufacturing center for many Western clothing brands you can find bargains on name brands but there’s also a lot of fake stuff here too so buyer beware. Browse through dark aisles full of cheap souvenirs to every size of a Buddha statue possible and lots of housewares too. I came hear because I heard of a very famous coffee bar run by someone who epitomizes the charming Khmer people. Mr. Bunnerath.

This was a real treat made by a locally owned company and featured some of the best flavors from the fresh fruit of Cambodia.

Kings of Cambodia have occupied the Royal Palace since it was build in 1866. A period of absence occurred during the Khmer Rouge reign from 1975-79.

The palace is open in the mornings and afternoons with a break from 11 to 2. Much of the grounds are closed to the public as this is still officially the residence of King Sihamoni. The main attractions are the throne hall used for coronations and ceremonies. As well as the shrines of King Norodom and King Ang Duong, a pavilion housing a huge footprint of the Buddha and the Silver Pagoda that houses a life size gold Buddha bejewelled with 2086 diamonds. If you want to image what some of the sites of the Angkor ruins were like decked out in their glory visit the Silver Pagoda.

One of the most unique buildings in all of Southeast Asia has to be Phnom Penh’s Central Market. An art deco dome constructed in 1937 with four arms that extend out from the center that house t-shirt stalls, jewellery, gold, housewares, just about anything you could image except for live animals. The neighborhood surrounding the market feels like the heartbeat of the city. Inside you can also find many foods stalls selling seafood and Khmer specialities.

Phnom Penh is filled with wonderful heritage buildings, culture, beautiful surroundings as well as a pulsing energy and hectic pace.

The reminders of the horrific past of the Khmer Rouge reign that decimated anywhere from 2 to 3 million people, some executed simply because they wore glasses are everywhere. It was a time when anyone that was felt a threat to the Khmer Rouge was eliminated. A visit to Toul Sleng Museum or S21 where prisoners were interrogated, some killed here, most sent off to the killing fields. Toul Sleng should be seen by anyone visiting the city as a way to pay respect to the people of Cambodia who suffered the terror of the darkest days in it’s history.

The neighborhood where Toul Sleng is located looks ordinary enough until you see the fence and barbed wire and feel the weight of fear that still seems to linger around it’s entrance. Toul Sleng means “hill of the poisonous trees.”

This was a former high school that the Khmer Rouge converted into a prison and interrogation center in August 1975 four months after they won the civil war of Cambodia. The classrooms were divided into cells for imprisonment and torture. Renamed Security Prison 21 or S21 it’s believed that over 20,000 people were held here before they were executed.

For many this will be a saddening, depressing experience. Rooms with iron bed frames and images of how the Vietnamese found the last few that were tortured here. But I think it’s a necessary visit to understand what turmoil the Khmer people and it’s culture have experienced.

Most of it’s educated population, artists, professionals who did not escape were executed in either this prison or at one of the other 150 around the country and the infamous killing fields. Buddhist temples were turned into torture chambers and execution sites. It’s an example of the worst of humanity. To visit Toul Sleng is to understand Cambodia as it is today.

It’s truly a remarkable story to see the Khmer culture alive and flourishing in the capital. Like the energetic performances of dance and theatre presented by Cambodian Living Arts in the National Museum. And Meak Bochea , the Buddhist festival commemorating the last sermon of The Buddha. Reminders of the horrific past are everywhere in Phnom Penh, but so is the undeniable beauty of it’s people and culture.