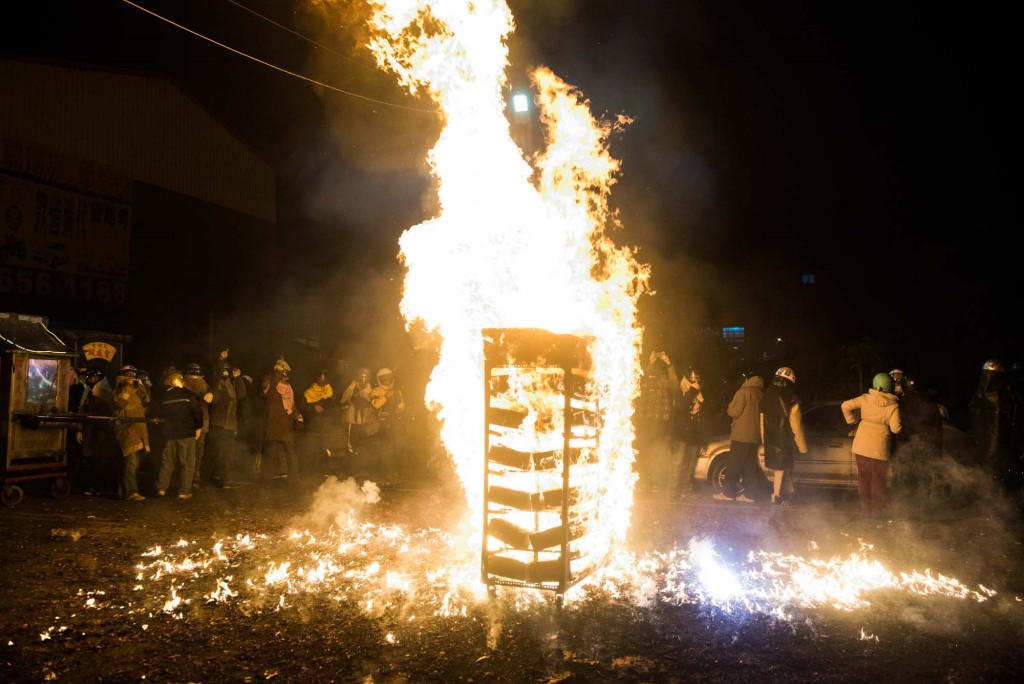 The Yanshui Beehive Fireworks Festival is held every year in Yanshui District in Southern Taiwan. Locally known as the Feng Pao it is considered one of the most dangerous festivals in the world as well as being the third largest folk celebration. Why do they blow off millions of bottle rockets and firecrackers you ask?

It all started with a cholera epidemic in the late 19th century. Due to the underdeveloped state of medicine victims multiplied daily and the people of the district lived in fear.

On the day of the Lantern Festival, 15 days after the 1st day of the Lunar New Year, town folk paraded Gaun Di, the God of War on a palanquin around the streets. Firecrackers were lit until dawn. In one night the people of Yanshui rid their district of the plague and the festival has been carried on ever since.

I found my first Pao Cheng or artillery fortress with an impressive God statue, battle ready, and placed above the bottle rockets. The larger pyrotechnics stacks on top of the walls you’ll see are usually ignited at the end of the bottle rocket blast as a finale. Behind the God and first wall, more walls, thousands of bottle rockets that will be ignited as part of the first beehive of the night.

A little teaser before the first blast. Two Beehive festival goers wearing lots of protective gear are wrapped in firecrackers. Getting hit by a bottle rocket is considered good luck, this could be the ultimate New Year’s blessing.

Then the festival escort truck arrives followed by the Gods on their pallenquins carried by men armoured with heavy jackets, helmets, canvas and hundreds of meters of tape holding it all together. The air is already thick with smoke and now filled with nervous energy as everyone begins to crowd around the walls waiting for the first beehive to explode.

The Gods are moved right to the front of the massive walls of bottle rockets and the towering God overseeing it all. Just before the rockets are lit the attendants shake the palanquins for good chi, or energy.

Fireworks light up the sky, the electrical charges in the air are almost as thick as the anticipation of the Pao Cheng that’s ready to be lit.

Then we get the signal, their ready to go. The men at the front of the palanquins quickly turn their backs to the wall, and brace for the barrage of piercing rockets.