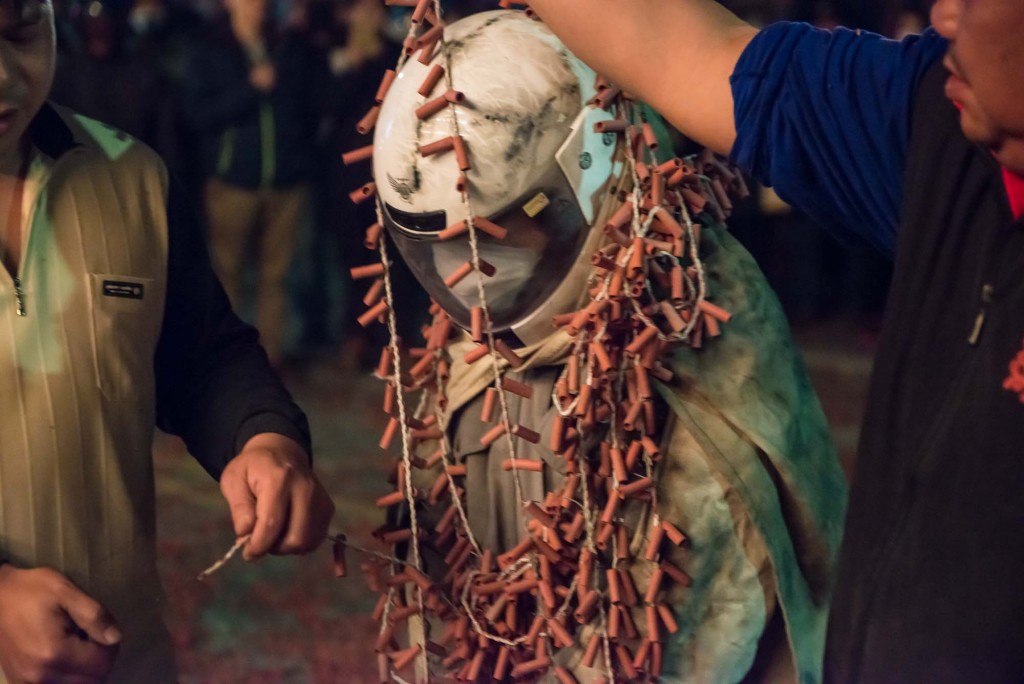 We get the signal, they’re ready to go. The men at the front of the palanquins quickly turn their backs to the wall, and brace for the barrage of piercing rockets.

And the cacophony of the beehive began with roaring tides of bottle rocket streaks fired off in all directions. Exploding in mid air, sometimes right in front of my mask and tiny explosions at my feet.

The giant God overseeing it soon disappeared behind the thick cloud of pyrotechnics smoke. Most of the gatherers near the Pao Cheng were facing the opposite direction, an extra layer of canvas protecting their backs from the bruise inducing rockets.

Almost everyone is performing a funny shuffle with their feet to prevent bottle rockets from exploding up their legs. It’s a nervous dance I found myself instinctively doing out of fear as well. The palanquin attendants continued to shake the Gods for good chi.

The final wave of rockets is super intense, emitting a glow behind the giant War God. Although I’m startled by the occasional rocket blowing up in front of my face or hitting me, the energy is intoxicating, the rush is addictive, I was loving the experience.

The final rockets launched are like guided missiles directed right at the crowd, the last bit of torture before the pao cheng is put to rest.

After the beehive was finished the crowd quickly scattered into the streets to immediately search for more Pao Chengs. It’s addictive.

It seemed that every direction you look fireworks filled the sky in the distance. With always chance of something going off right at your feet.

A few of the followers at the close-by temple began tossing strings of firecrackers onto the streets. Sometimes not even bothering to spread them out. Little piles of explosions littered in front of us.

The next dance through the firecrackers is delayed by a fire that broke out behind a small building on the street. The fire is doused and street explosions continued. Some running into the smoke chasing the strings of freshly exploding firecrackers and the space that’s been cleared of evil spirits.

The fireworks continued to streak the sky and the explosions echoed through the streets that are all shut off to traffic during the festival.

I approached a beehive already in full force, the air painted with the bright orange streaks and rockets bouncing and exploding off the ground.

The rockets of the wall had finished their work and the final fireworks were lit, shooting straight up into the sky. The crowd’s dancing stopped, mesmerized by the final moments of this display of fire, like a dragon on it’s last few breaths.

A slight contrast to the alternative entertainment on offer. If it wasn’t for the sounds of explosions and fireworks lighting up the sky it would have felt like any other of the hundreds of Taiwan night markets across the island.

I made my way through the street lined with stalls where the smells of food frying, steaming, and braising were competing with the wafts of fireworks smoke that lingered over Yanshui District. I wondered what people who lived here thought about the festival and the crowds that descend on their hamlet every year. I spoke with local resident Yu Chin Wun.

In the streets, walls or pao chengs are repositioned. Palanquins are delivered to new spots and crowds knowing another beehive is about to start, begin to gather.

Next time on Far East Adventure Travel, the grand finale and the conclusion to Gods, Rockets, And Warriors.