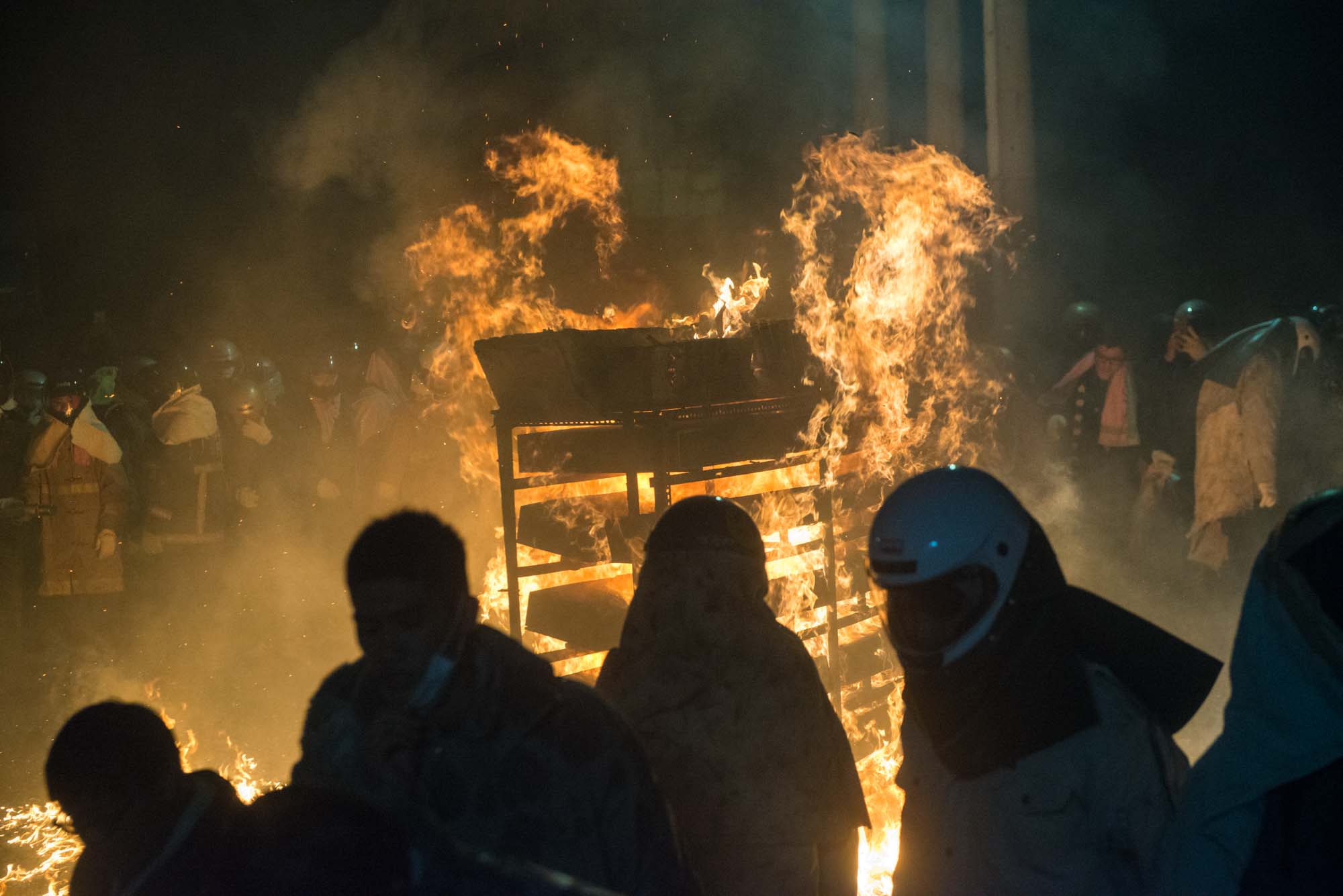 Another beehive is finished. The palanquins are directed away from the middle of the street so oncoming emergency vehicles can pass through the crowds and the piles of fireworks remnants. Appearing to be cruising the area, when someone truly is in need of emergency care I’ve seen these vehicles swiftly moving through the streets of Yanshui with the help of volunteers.

Despite the elaborate fireworks displays, countless pao chengs, and international attention Yanshui District has never forgotten the reason for this festival. A desperate cry to the God, Gaun Di, or Gaun Gong, the God of War to save the region from the devasting plague that took many lives here in the latter part of the 19th century. Temples and shrines are buzzing with followers praying throughout the two days of the celebration.

Initiation in the festival starts very young for many with introductions through sparklers and non-explosive fireworks. Playful beginnings.

It’s tempting to just move from one beehive to another but the dark corners of streets and lanes of Yanshui District seem to tell so many stories, as intriguing as the open spaces that are taken over with the fire that lights up the sky.

This festival is so intense that time spent walking around the trafficless streets in between the beehive bombs is a relief. The mystery that’s enhanced by what you can’t see is intensified by the traditional music playing and explosions in the distance. But, it doesn’t last.

I find another smaller crowd down a lane that’s working little pao chengs, crate sized but still packed with power and energy to create a more intimate experience. No traffic controls needed for these little beehives. Carry the finished one away and bring another one out ready to go.

In front of another temple a series of random festival goers are pulled away from the crowds to be strung with hundreds of firecrackers. This is deadly serious festival going!

The largest Pao Cheng or artillery fortress of the two night festival is held on the grounds of the Yanshui Junior High School with 600,000 thousand rockets blasted into the biggest crowd of the night. It was my last Pao Cheng experience of the festival. Thousands ascend on the grounds, even more further away in the town. A light rain shower began over Yanshui District. It felt comforting like a safety net dropped from the sky.

After the obligatory introductions the biggest blast in East Asia begins!

The Pao Cheng starts slow, like a symphony performing a crescendo soon erupting into a volcano. Further away from any wall I’ve visited throughout the festival it feels just as intense and nerve racking, with numerous rockets exploding and striking me. Even hundreds of feet from the stage people still nervously dance as the rockets hit the ground.

A rocket bounces right off of me back into the crowd.

Lights from the sky appear as dancing reflections in the helmets that attendees wear, a massive cloud of smoke forms over the school grounds with a mix of rain and showers of rockets, the two elements competing for space.

Finally after several minutes the biggest Pao Cheng of the festival ends. But the fireworks continue along with more pao chengs through the streets of Yanshui District.