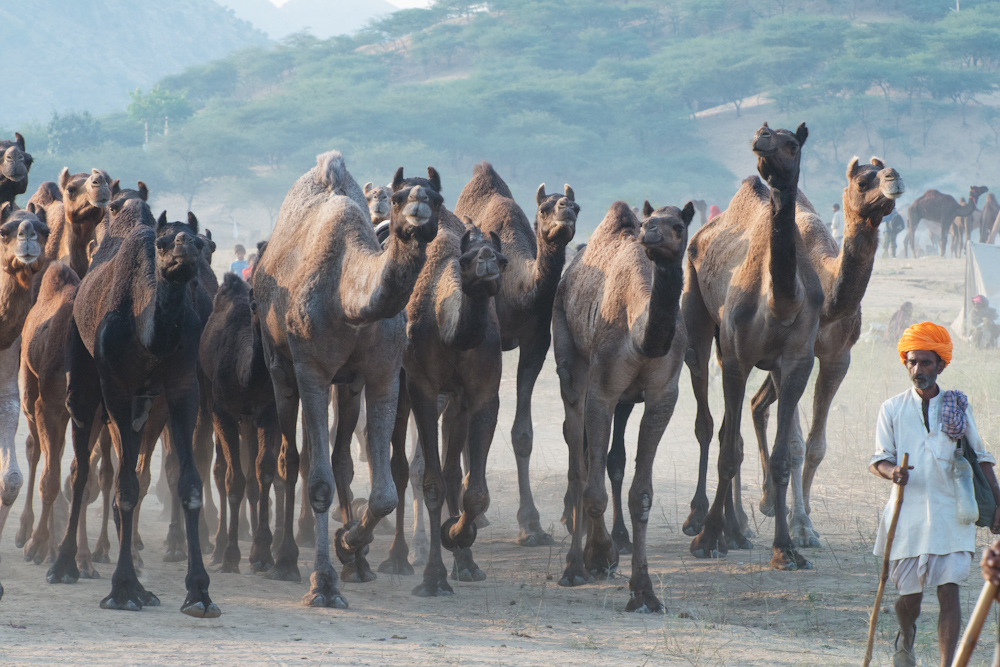 The Journey
I had been planning a trip to The Pushkar Camel Fair in Rajasthan, India for two years. Now I finally find myself in Jaipur ready for a bus ride to this fabled event.

What I don’t know yet is the camel fair is more than just a place where camel traders come to do the business of trade and commerce. It’s really a crazy spiritual exotic livestock event filled with gypsies, holy men, chanting and praying over loudspeakers, and of course the star attraction, thousands of bellowing camels.

First I had to get through the bus ride. Traffic is congested through the outskirts of Jaipur and I was sitting beside a woman from Italy who is suffering from a cold and blowing her nose every three minutes. So in order to get through this ordeal in my mind I have dubbed her The Italian Snot Factory.

Travel tip, if you ever sit next to anyone that is annoying or doing something that really bothers your space but you find it inappropriate and/or are uncomfortable saying something… this little trick works.

After a quick stop in Ajmer it’s  about another 45 minutes of driving up a windy road before we have arrive in Pushkar.

Finally after a five and a half hour bus ride we arrived in Pushkar and rush off the bus. It’s dark, dusty and of course I’m greeted by extremely enthusiast tuk tuk drivers – ready to serve my every need! They never let up – but I’ve gotten the hang of dealing and negotiating with them. After I firmly told them no hotel needed, I negotiated a ride to my hotel after a threat that I will just walk.

Camel Fair is the busiest time of year in Pushkar. Rates usually double or triple for the week and that’s  normal with the high demand so it is advisable to make a booking well in advance.

Settling In and A Restless Sleep
I’ve actually arrived a few days before the official start of the fair when most of the business of camel trading is done and the camel population is at it’s height. I was lucky to get a spot in a nice little budget hotel just outside from the main bazaar and village.

I think Aneel is the nicest hotel owner I have ever met and I arrive with a warm greeting and small tour of the hotel and my room. Loud music is coming from the outside of the village and Aneel informs me it’s a wedding party and he’s off to join the fun. Apparently there are wedding parties here almost every night, especially this time of year. There will be some sleepless nights, but this won’t be the only noise I will suffer through.

After a dinner on the rootop I’m off to investigate the party and the outer village area. It’s dusty here with definitely an outpost feel to the place with people watching T.V. outside of some chai places. There’s a small army of Saddhus, or holymen wandering, squatting, meditating and doing what Saddhus do. Leaving the rest of the place to explore in the morning I head for my room.

Around 4 to 4:30am I wake up to hear what I think are prayers. Not the first time I’ve had to deal with this, but it seems a little early for Muslim prayers. Within an hour it stops and I manage to drift in and out of sleep for another hour. No big deal, I’m here in Pushkar and excited to see the village and the thousands of camels I’ve been thinking about for the last two years.

I have some breakfast and head for the Sadar Bazaar, the main street and shopping area with access to the many ghats or steps around Pushkar Lake, one of the holiest places in all of India. It is said that the creator god Lord Brahma used a lotus flower to kill the demon Vajra Nabha. When the petals dropped one of them landed and created the lake. It is a prominent hindu pilgrimage.
Sadar Bazaar and Pushkar Village

The Bazaar is loaded with shops selling everything from puppets to fresh juice. Pushkar was on the original hippie trail and there are still hippie joints serving veggie burritos and banana pancakes. You will also find the odd 1st generation hippie fixed to their chair sharing new and old stories. The new generation hippies are everywhere. They’re couples with babies and single travellers in the Pushkar scene for multiple weeks at a time.

I love the energy here. Lots of pilgrims, new hippies, old hippies, saddhus, hindu priests, pseudo hindu priests, more to follow, travellers like me, and the nomads that live their life around the camel trade. From the bazaar there are several entrances that lead to the many ghats or steps that surround the lake.

A word of caution. You will be approached by men that appear to be hindu priests that will offer you flower petals for good luck. Do not take them. These so-called priests are really just touts that will pressure you into accompanying them to the lake for a puja, or prayer ceremony, and will expect a huge tip. Best arranged through your hotel with a legitimate priest a puja can be a wonderful experience and a reasonable tip should be in the range of 150 Rupees. 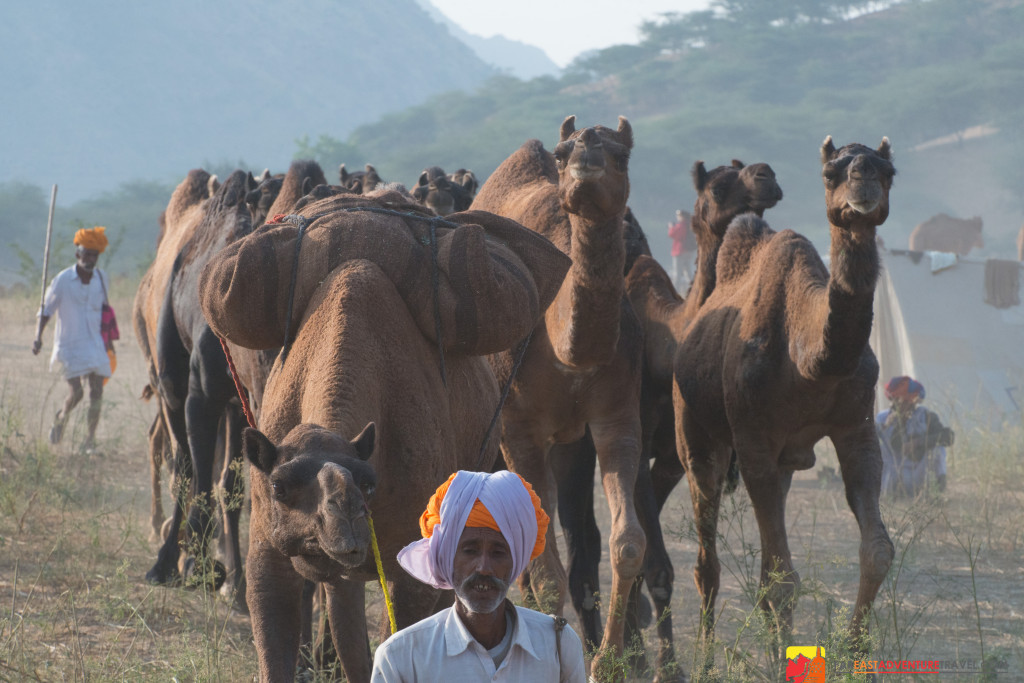 I finally make it to the fairgrounds and I feel like I’ve stepped into another time. Another time filled with dust, flies, and the smell of camel shit. 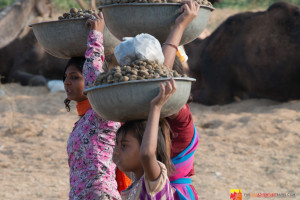 There are thousands of camels everywhere.   A real community of camel herders/traders, women and children collecting camel dung in large metal basins. Musicians that will chase you while playing their stringed instrument or sarangi, and gypsies that speak very good English.  They’ll greet you with warm hello’s and a kind offer to take their picture. Remember there will be some baksheesh or tips expected at the end of any of these exchanges.

The sounds of camels were coming from every direction.   Bellows, roaring, and squealing. If you are not prepared for this scene it can be quite disturbing. 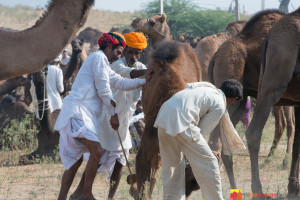 The camel men use strick discipline to train camels and often use a stick to beat them. Their front or back legs are usually tied together to prevent them from running off or getting out of control.  Their noses are pierced with a rope attached to the metal posts as another means of control. When the rope is pulled hard on the posts the camels will scream. Otherwise the rope is used to control the camel’s direction of movement.

You really feel you are in a special place and the meaning of this event is significant to the livelihood of many of the people attending. 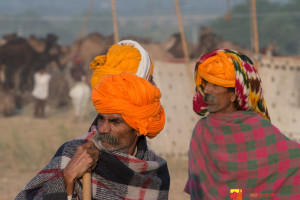 The camel men dress in traditional Rajasthani turbans and at times in the distance they seem like ornaments in the thick of the dust and low bush and grass of the desert.
I’m soaking in all of this activity. The sights and sounds of the camel herding. Gypsy women in heavy make-up and traditional costume parading around looking for an unsuspecting tourist with a camera. Sarangi players chasing behind camel caravans full of people looking for an authentic experience.

Does it have a slight commercial fee to it? Yes. Is it disappointing? Definitely not. It’s a carnival, a circus, history, tradition, it’s India! All under the desert sun. I’m in sensory overload so I take a break and head back to the village for a midmorning refreshment. I’m also feeling a little wiped from last night’s shitty sleep. I will find out later that the early morning “prayers” that woke me up will only get worse…to be continued….