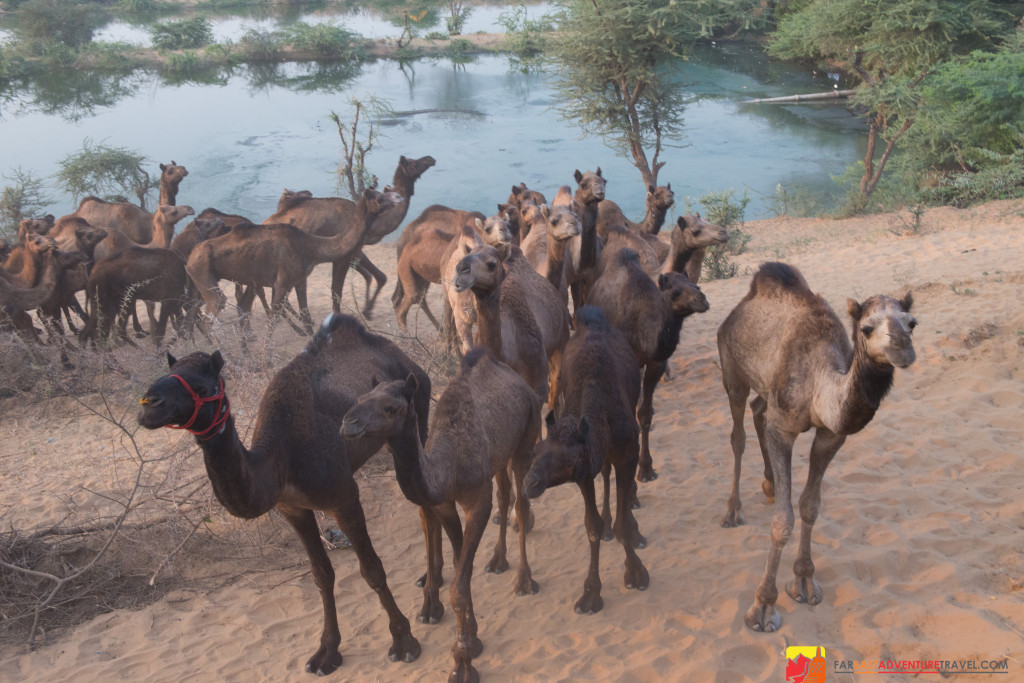 I found a great fresh juice place in the bazaar. Stools sit almost right in the pedestrian area so it’s perfect for people watching and chatting with other travellers.

I found Pushkar one of the easiest places to strike up a conversation with strangers. I still don’t know exactly why. Was it me? Was I feeling different being there? Not really.
Maybe the event, the spiritual energy, the crazy vibe of Pushkar, the hippie roots, maybe everything. 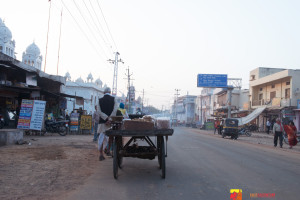 After my juice break I went back to my hotel for a rest before another trek up to the fairgrounds for more pictures pre-sunset.

The late afternoon went well with lots of photo opportunities. 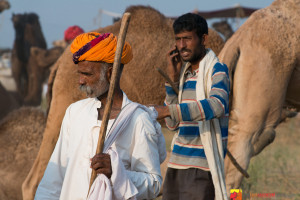 It’s very clear the camel herders are not interested in me or anyone else taking pictures. They are there to do business. Occasionally if you walk buy a group of them they will make a motion with their hand for baksheesh. Otherwise I am just a distraction at best.

Even in the late afternoon the heat is still intense. A cover or mask for your face is very handy here. Remember what I said about the camel shit, it’s everywhere. On the ground, in the air mixed with dust and sand. I’ve had enough and head back to the village for something to eat.
No Beer Here? 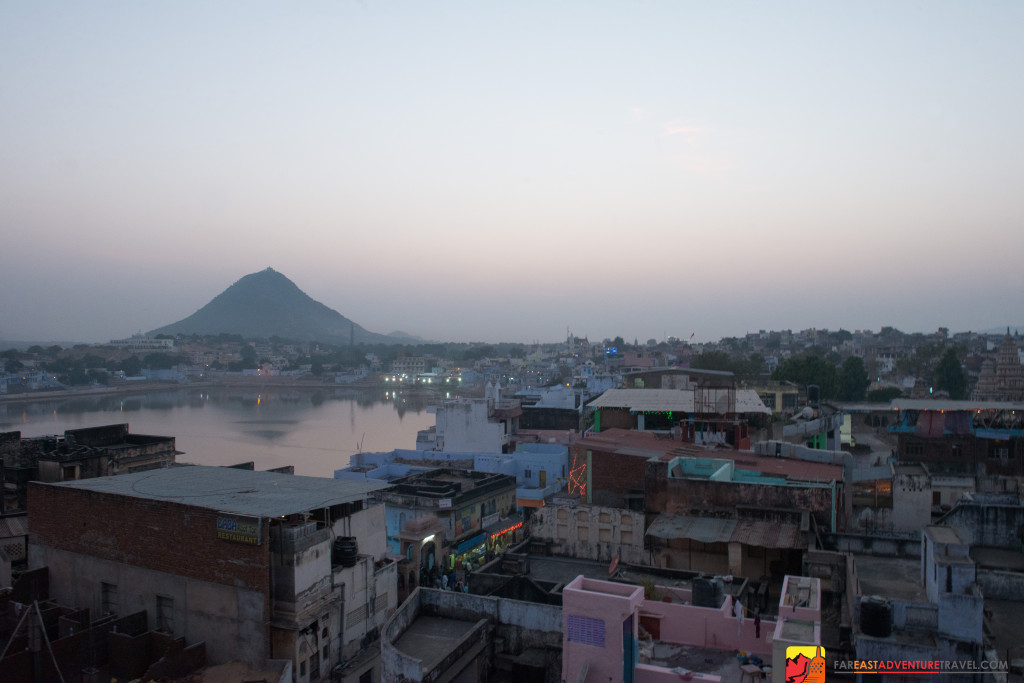 I’m really feeling like a beer but there’s one problem. Because of it’s holy stature Pushkar adheres to strict vegetarianism, including no eggs, and no alcohol. However, there are some places in town that serve beer and alcohol discreetly. You will not see it on a menu, just ask.
I will not disclose the places that serve it.

Do I feel slightly guilty not respecting the local religious laws. Of course. But it’s available so I’ll imbibe. After a shitty sleep and breathing in dust laced with camel dung a beer sure hits the spot. Forgive me Lord Shiva, this is survival. 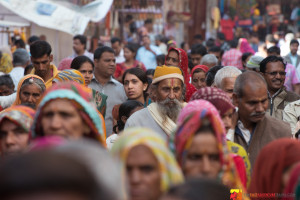 After dinner I wander through the village checking out the stalls and shops filled with souvenirs and local crafts. Pushkar’s merchants are a little laid back compared to other Indian cities. You’ll find it refreshing.
Sleep, Yeah Right?
I’m back at the hotel ready for bed. Getting to sleep is not a problem. Staying asleep, big problem.
I wake up at 2:30am this time.

The prayers, or chanting have started again over their powerful loudspeaker. I’m awake for about an hour waiting for it to stop. It doesn’t. I put pillows, sheets, clothing, anything I can find over my head. Even the foam earplugs I brought don’t help.

Everytime I look at my watch an hour goes by and the prayers continue. Finally I give up. It’s 6:30 and I get up and head for the rooftop. I hear the loudspeaker but because we’re close to the hills the sounds seems to echo and it’s hard to place where it’s coming from.

I meet someone else staying at the hotel. Joyce is working at the local Animal Shelter. An expat from England this is her second time around in Pushkar. We talk about the prayers. I’m even humming the parts I remember that sound like singing. 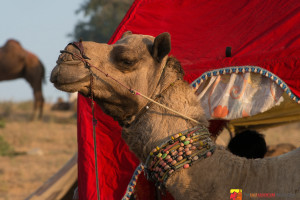 She remembers staying here at the same time last year and hearing about a story of a man that has been coming to Pushkar for twenty years. He always comes around the time of The Camel Fair. The story goes he is praying for a God to come down from the mountains. He’s been doing this for 20 years and he will continue until the God comes out.
The prayers continued. 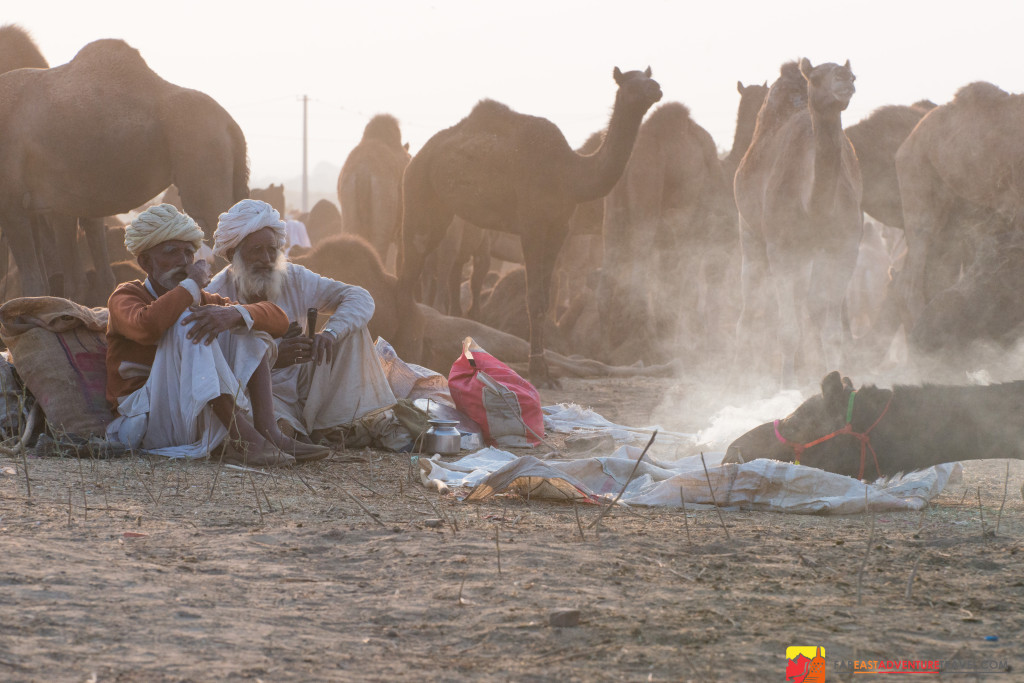 Silicon Gel Earplugs
Tired and needing some more coffee I head for a little Inn I want to check out in the village.

It’s a converted haveli, or mansion with a beautiful courtyard and stairs leading to a patio and rooftop restaurant.

I see a man who appears to be in charge. He’s the owner.

After my coffee I’m paying the bill when the hotel owner, Anoop, says he’s seen me walking near his other hotel. I let him know where I’m staying and yes it’s close to his other property.
” Have you heard the prayers?” I said. “Yes”, says Anoop. I ask him if it’s the man that’s calling the God to come down from the mountain. “No, it’s actually an Ashram someone has set up in a tent”. Anoop goes on to tell me he has clients in his other hotel that booked months in advance and are very upset because they too cannot sleep. 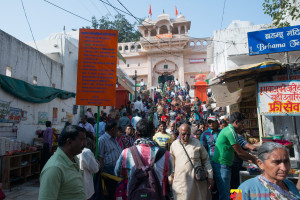 In the meantime, Lloyd, a British expat who works with Anoop overhears our conversation. Lloyd joins in and then mentions these earplugs he purchased when he was back home that block out all noise. He immediately runs in the back and comes back with a little metal case. He opens it up and offers me a fresh pair. They are like a gel that mold to your inner canal. “Wow, this is amazing! Thank you!”
I head back to my hotel.

As I get nearer the praying, chanting, gets louder and louder. I know my nerves will be shot if this doesn’t work. That familiar sing songy part of the prayer continuously repeats in my head now like a bad song with an unforgettable verse.
I do a test run of the plugs and sure enough they have completely blocked out all external noise.

That night I slept so much better. I was happy to report back to Anoop and Lloyd of the success of the earplugs. My stay in Pushkar could have certainly led to a minor nervous breakdown. The least a fried brain. 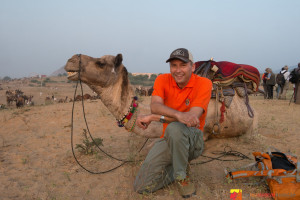 I stayed in Pushkar a total of six days. Still one of the best memories of my last trip through India. A wonderful experience saved by some new friends with their kindness. The prayers over the loudspeaker never stopped.

I don’t have the product name but they were made of soft silicon gel and came in a metal box of three pair. A must have for a trip.

If you want to see the world famous Pushkar Camel Fair I would suggest you arrive a few days before the official start. The camel population diminishes just before the fair opening. The fair coincides with the Hindu festival of Kartika which ends on the full moon day with a ritual bath in Pushkar Lake. I’ve been told it’s a beautiful site.