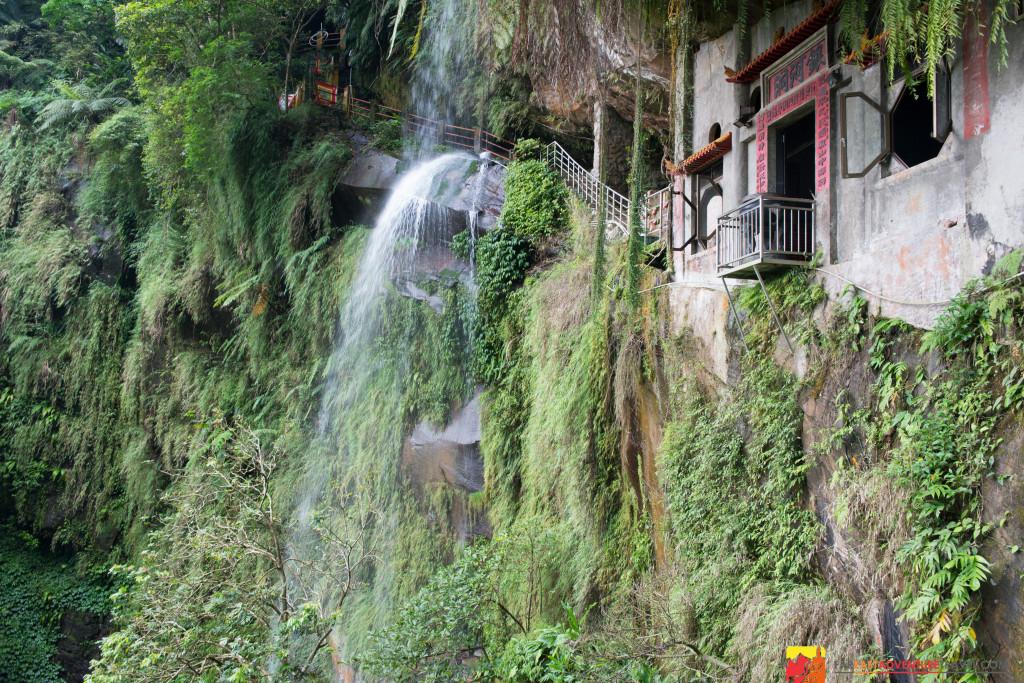 I was ready for another hike around Taipei. My guide book suggested a hike above the Moakang Gondola station that would take me to a beautiful waterfall and Buddhist temple carved out of the side of a mountain. Exercise, adventure, some spiritualism mixed in, I’m liking this alot.

But what I wasn’t expecting was a spontaneous meeting up with two like minded Taiwanese that would make the day and affirm my belief in travel, seeking new friendships and the law of attraction.

I left the MRT station that stops at the Taipei Zoo and Moakang Gondola station. Once you’re here you feel like you’ve been transported to another world, closer to Jurrasic Park than a large Asian city.

While in line I struck up a conversation with a couple of girls that were just finishing up their university semester. We ended up on a crystal cabin gondola together with a see through floor.

We immediately notice the various shades of green from the jungle. More like a shades of neon green that pop out from the brown tinted glass. An odd almost acid trip world with beautiful thick jungle and little houses and temples nestled in the hills. 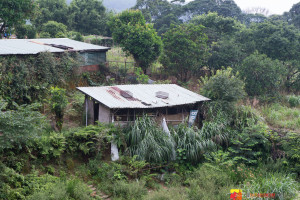 “What are your plans?” My new friends Yinghan and Olivia asked.” I’m going for a hike to a waterfall. Do you want to join me?” Excitement but questions. “What do we need?” “Oh just some water, it’s not a long one” I said. “Is tea O.K., that’s what we have.” “Ha, I think that’ll do…”

So Much For Directions

We left the gondola at the last station, Moakang. Using my guide map we headed for the trailhead. I’m not off to a good start. Vague directions on my map, little or no English on the local sign boards, and a lack of the Chinese language. I went from confident guide to useless tourist. I really need help from my new friends now.

They started asking for directions from of the teamaster at the teahouse behind the San Xuan Temple.
So we start heading up the road. 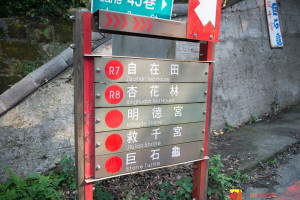 Here’s where one of the simple rules of taking directions should be followed.

When you get directions from one person, stick with those directions as long as you’re confident. The minute you start asking other people where you’re wanting to go you can easily get sent into a confusing maze. This not only wastes time but could drive you to the point of giving up and abandoning your day.

I once was in Taipei trying to find this one particular coin laundromat. Because I asked for directions from more than three people in the area I ended up circling around a few blocks for an hour and half. Later I found out that there were two coin laundromats in the area. I was being bounced back and forth everytime I asked someone else for directions. I almost dropped my fucking sack of dirty t-shirts and underwear right on the street and walked away.

After asking another person at a teashop, some groundskeepers, a car driving by, and some local guys also hiking in the area, we finally gave up and started on what we thought was a different trail. At least we’ll get a hike of some kind in.

The area is lush with bamboo, ferns of every kind and exotic flowers. A thick jungle with the distinct loud clicking and hissing sound of the cicada insects and singing birds. Spectacular views of what seems like layer upon layer of mountain ranges.

As we got further into the heavy mass of green jungle we started heading downward on the trail and came upon the peculiar site of a metal hand rail. In the middle of the forest? Certainly it helped. This was a steep trail full of slippery stones. 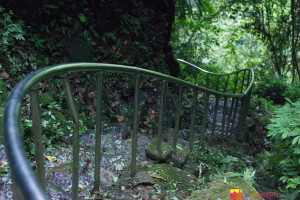 The Temple And Waterfall

Finally we came to a beautiful pond with a small stream. And right next to it, the waterfall I was so hoping to find and promised to get my new friends to.

What a great feeling. We let go of finding the waterfall and temple. We enjoyed the moment, then we were given exactly what we wanted. The Buddha is in us.

We all commented on how peaceful and serene it was here. Right next to the waterfall and behind it, The Yinhe Cave Buddhist Temple. 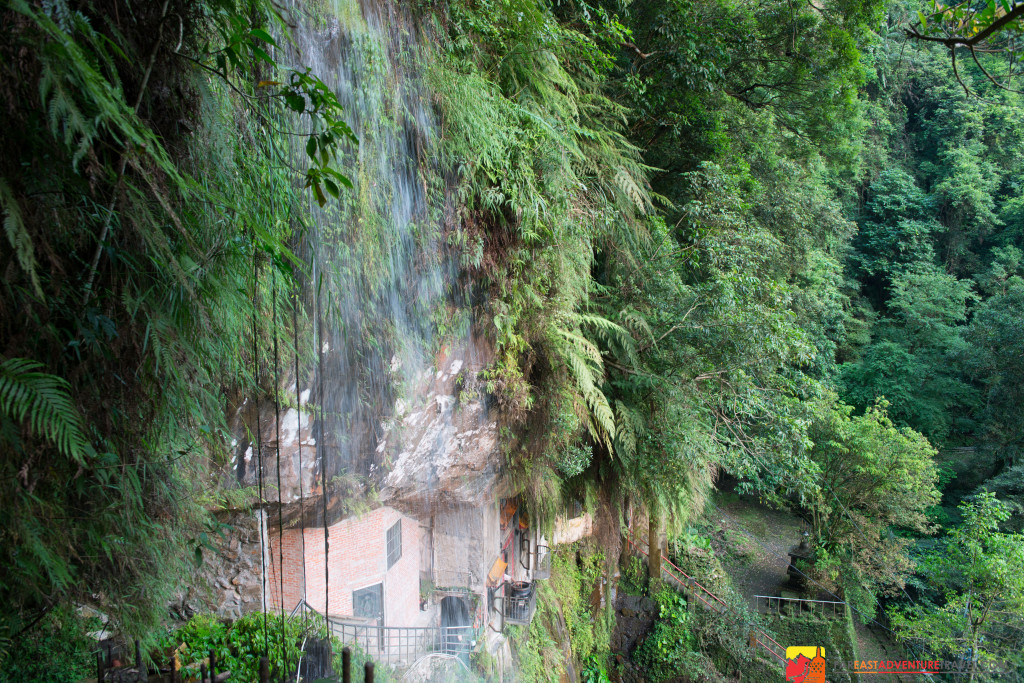 All three of us made our way up the stairs that clung to the side of this rock where the temple lay. We admired the beautiful waterfall from here and continued to enjoy the tranquility. 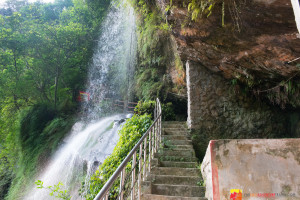 I found out Yinghan is a Buddhist. She began to light incense for prayers. We watched, then lit our own incense and shadowed her. Yinghan talked about how she didn’t like the protector Gods, “they’re quite scary”, when she was growing up and she feared them. Only to learn and believe later that they needed to be scary looking so they could frighten off the evil and bad. 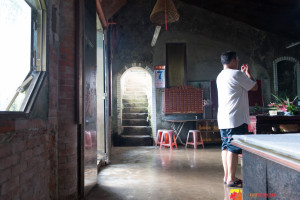 We started talking about Buddhism and the Dalai Lama and we all came together. Strangers, only two hours ago. Relating to each other and sharing common thoughts and philosophies. I told them my stories of travelling through Tibet and seeing the Dalai Lama in person twice in my hometown. 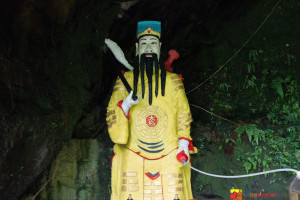 I remember thinking this is so amazing, so powerful! Like minded people, strangers, finding each other in the middle of Taipei in a line for a gondola ride. Sharing a moment I know I will never forget in this tiny little temple carved out of the side of a rock behind a waterfall. I thought to myself how is amazing is this? I don’t know how these things happen and I don’t really care. They are wonderful travel moments that reaffirm my belief we all are interconnected. We have so much to share.

We took a different route out of the forest. We continued to descend into the thick jungle with more streams, small waterfalls and exotic flowers. 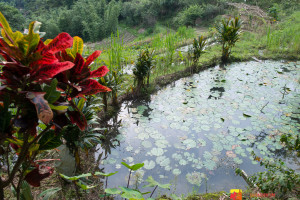 Then End Of Our Short Journey

Yinghan and Olivia told me one of the men we bumped into at the temple suggested we exit out of the jungle this way and catch a bus back to the MRT station. Faster than hiking back up the mountain to the gondola. It was getting dark.

We continued to walk finally reaching pavement and a small village. We found our bus, and rode back to the MRT station. We chatted some more about getting together another day and climbing Mt. Yushan, the highest peak in Taiwan. We shared email addresses, Facebook. We finally went our separate ways. Just like that!

You can reach The Maokong Gondola by taking the MRT brown line to the last stop, Taipei Zoo/Maokong Gondola. The Maokong station is the last station/stop on the gondola. Follow the road off the gondola until you reach the Zanghu Trail sign on the left hand side of the road. This trail leads to the temple and waterfall. About a 20-30 minute hike from here. 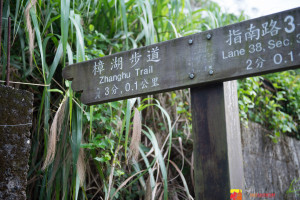