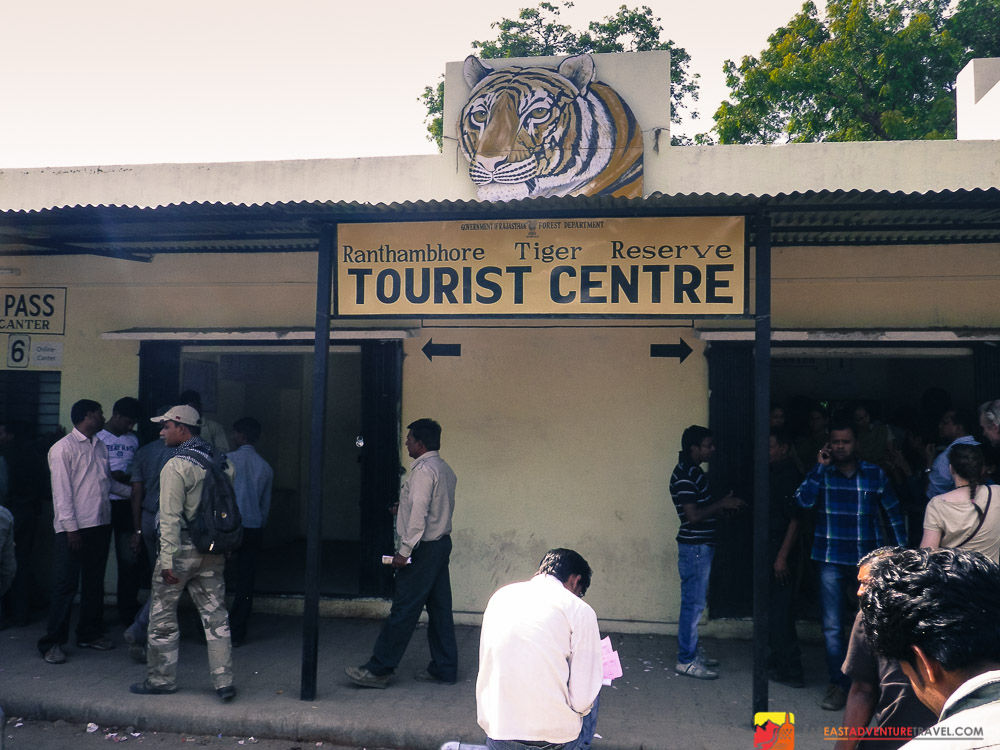 I came to Ranthambore National Park in Rajasthan India to see the Bengal Tiger. A life long dream. I still can’t believe what I had to endure just for a chance to enter the park. Yelling, pushing, shoving, deal-making, queue jumping, all under the roof of the Ranthambore Tiger Reserve office.

Ranthambore National Park is located in the Indian state of Rajasthan. It has been one of the most successful tiger reserves in all of India with an average count of approximately 35 adults. Because of its close proximity to the tourist triangle of Delhi-Agra-Jaipur it sees a lot of visitors. In the busy times of year not enough seats in safari vehicles to supply the demand. You will read about the extra gypsies, or jeeps they make available during these times. When I enquired with people in the industry about this they just laughed. They’re not for the public. VIP’s only.”So you can forget that man”! 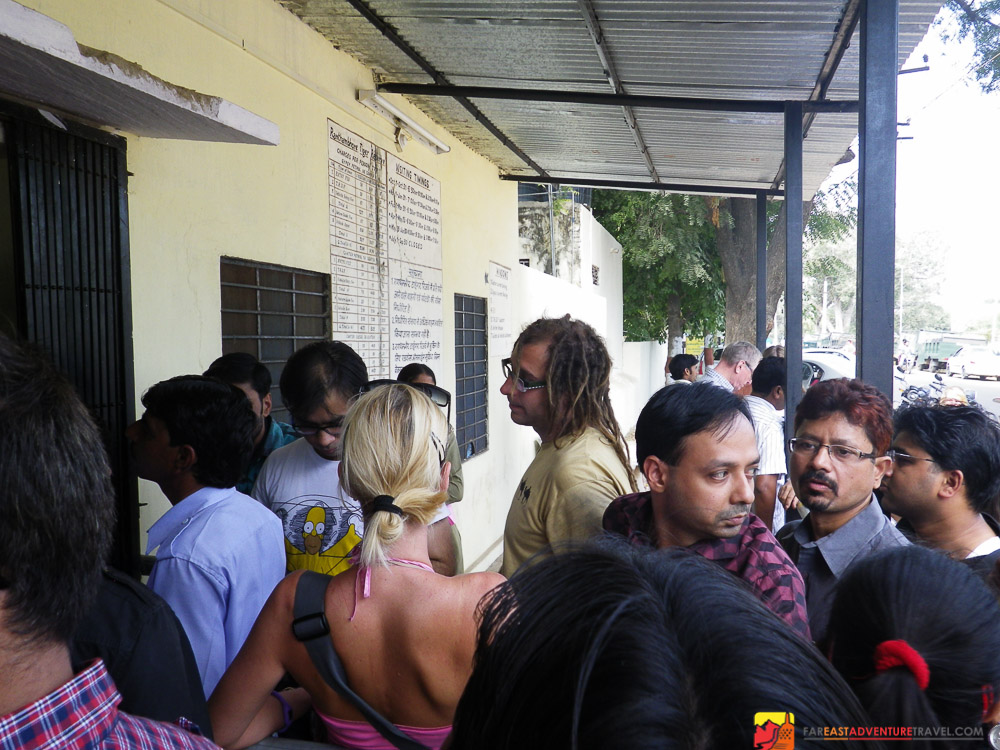 Lining up for a seat on a canter or gypsy

I had two strikes against me for a chance on a canter, the larger vehicle seating up to 20 people or the much smaller gypsy, seating 6.
First strike, I came at one of the busiest times of year, just before Diwali, the Hindu Festival of Lights. An Indian national holiday. The second strike? I had no reservations. The only edge? I was alone. Easier to fit me in somewhere on a cancellation.

Up until a couple of years ago at the time of writing it was possible to stay in one of the resorts near the park and have someone on staff visit the park office to obtain a ticket for you in line. All you had to do was sit around the hotel and wait for your ticket and pay an extra fee. But the government changed the rules. Perhaps there were some things going on, too many tickets going to one hotel, or tour operator, who knows. I could never get a clear answer from anyone. All I knew was I had to do down to the office and wait in line for a seat myself.

The first time I checked in to the park office was for an afternoon safari. I arrived about an hour before the office opened. A small crowd was already there. Guides from the resorts gathering outside and chatting. It seemed like there was some deal making in the works. Later I found out it was all about finding out if there were cancellations and how many. There was already tension in the air. I could feel it.

The park office staff hadn’t even opened up yet and the guides and travel agents were jockeying for position near the back of the office to slip a reservation form to the ticket counter. There objective? Get their client a seat no matter what. There was also a couple of park officers with sticks trying to keep the lines under control. This seemed more like a line-up to get a visa to leave a war torn country then a queue for a safari. 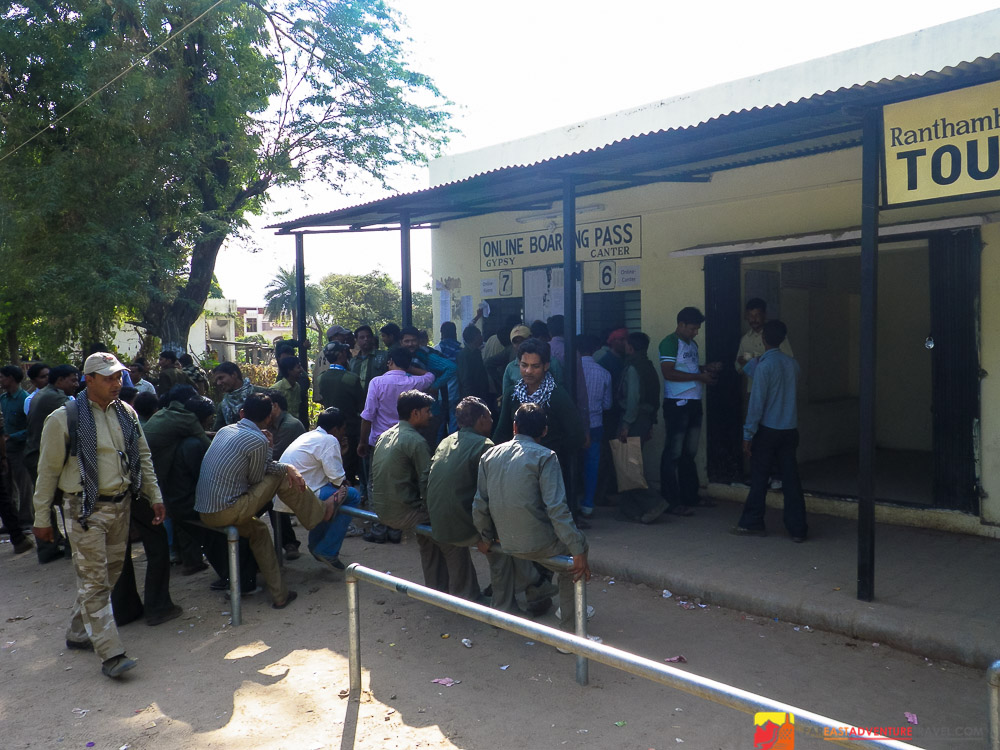 Rumble In The Jungle

This is when it just went too far. The lineups were getting longer and the officers were trying to keep everyone in their turn. Then a man I found out later was a travel agent from Delhi accused one of the officers of not doing anything to control the crowd. I didn’t need to know Hindi to see these two men were brewing with anger and ready to fight. I mean fist fight. I still don’t remember who started it but one of them shoved the other then they both started pushing each other. Yelling and snarling. I remember at the time thinking that the tigers were so lucky to be oblivious to this fuss. What a mess. What a taint on the whole thing. Someone got in between them and the whole melee eventually died down. Nasty stuff but definitely not dull.

My turn to the counter and I was lucky. A seat on a gypsy or jeep. I had a lovely safari that afternoon and saw a beautiful area or zone of the park. Wildlife including spotted deer and Sambar deer but no tigers. 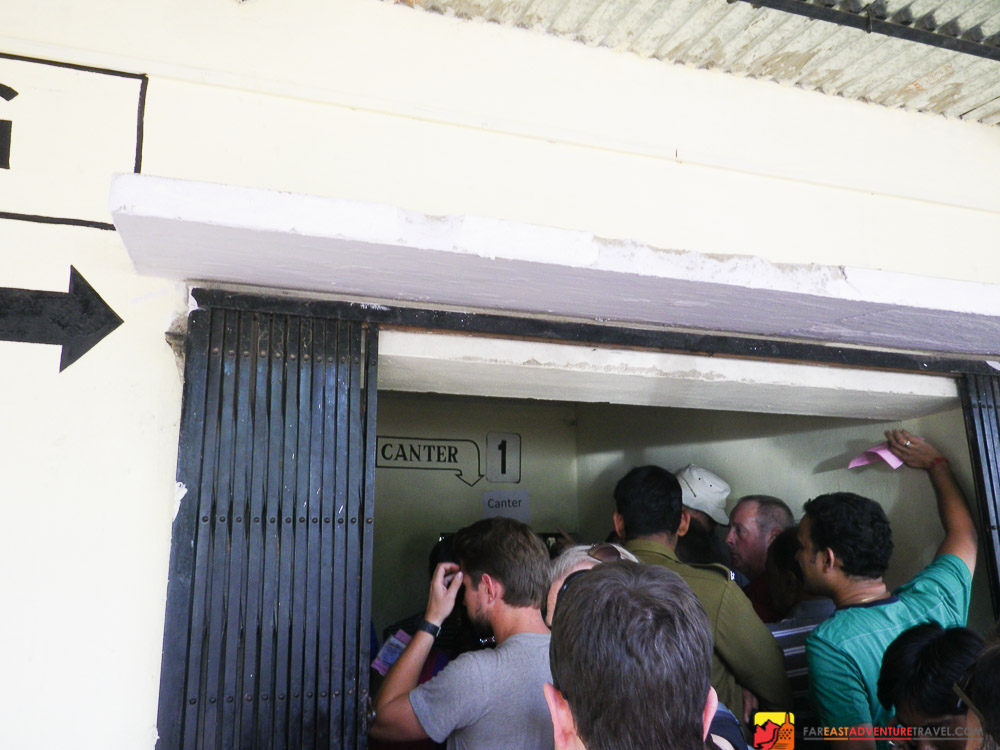 I had one more crack at a safari before I had to get back to Jaipur. But I had to be at the office at 5am to get in the line-up for a morning drive. I arrived just after 5 and there was only a few people ahead of me in line. I turned my head to watch my guide from the resort mingling around. He was moving in and out of the crowds. He was smooth. Chatting with other guides, park staff. He knew everyone and I could tell they all liked him. When I went back to focus on my place in line I noticed a man had jumped in front of me. What? I asked him to move back and he wouldn’t. My guide jumped in to takeover. He wouldn’t listen to him either.

This is one thing that will annoy you when you visit India. Many people, I’m not saying all, but many people do not respect lining up in order. It seems it’s just the way here. Now what? The parks people didn’t want to get involved. My guide slipped away for a few minutes. When he came back he had a little grin on his face and he motioned his hand to me as if to say don’t worry about him.

It was getting close to the cut-off. I motioned to one of the officers that seemed to like me that I was just looking for one seat. The same guy that had the shoving match the day before with the travel agent from Delhi. He took my form and handed it directly to the ticket person at the counter. “A single!” It’s always good to have connections. The man that cut in line in front of me got the three seats he was looking for. Finally I got to the counter. They had one seat left on a gypsy. I shook the officers hand and thanked him. There’s one thing about getting a seat this way. It definitely heightens the whole experience and anticipation of getting into the reserve. Ironically, it actually makes you more grateful for a chance at being in this spectacular place. 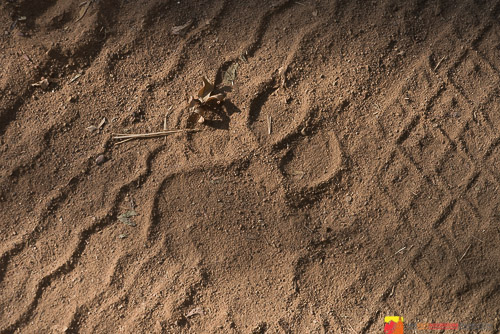 After I got my reservation my guide caught up with me and with a grin said he didn’t push it with the guy that cut in front of me because he knew he was getting the last tickets for zone 5 that morning. That was not a good zone for spotting right now. It was same one I was in the day before.

On the drive that morning we spotted lots of fresh tiger tracks. But no sightings. We were nearing the gate to the park entrance when finally our gypsy was blessed with the spotting of not one, but four tigers. A mother and her three cubs. 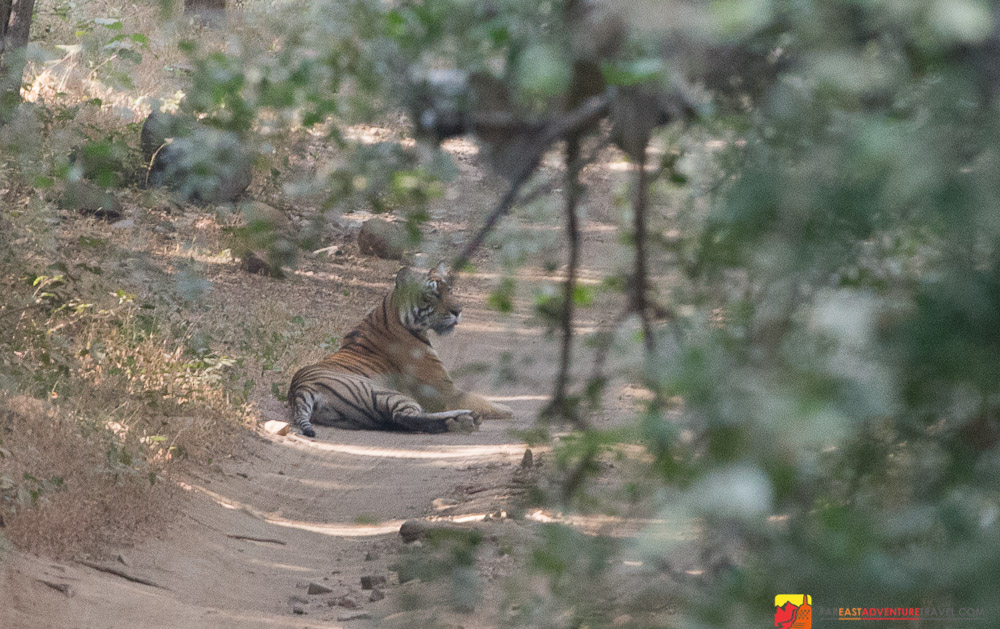 Mother in the distance watching over her three cubs

Since that day I’ve tried to describe to people the feeling you get when you see one of these creatures in the wild. I’ve tried but the words aren’t enough to do the experience justice. The whole jungle comes alive. All of the animals in the area start their cries, warning signs, alarm bells to let others know there’s a predator, a tiger in the area. The presence the tiger has and commands is indescribable. I’ve been on jeep safaris in Africa, walking safaris in Nepal but I’ve never experienced anything quite like this. Then again, I had never been in a line-up waiting for a seat on a jeep in India before either.

Travel Note: If you think you’re going to be near Ranthambore National Park(Tiger Reserve) in advance and you would like to see the tigers I highly recommend you make a reservation on-line. You can reserve a seat on a canter or gypsy. The gypsy or jeep is the most comfortable vehicle for safaris. They can also cover more areas in the park than the canters. Your reservation is a minimum of 90 days in advance. There is a link below to the website. When I was there in November I was told you have about a 30% chance of spotting them on a safari at that time of year. When water is less available well after the monsoon your chances can go as high as 70-80%. March/April are the best months. They are an elusive solitary animal. One of the hardest cats to see in the wild. If you were like me you are extremely blessed when you do see one. A moment you’ll treasure forever.
http://www.rajasthanwildlife.in/make_your_trip/Ranthmbor/planyourtrip.jsp