A message from my friend Yilang. Do you want to go with us to climb Mt. Dawu North in Southern Taiwan. It’s hard for me to turn down any offer for a hike or climb if I’m around Taiwan. Of course I would. I only have the experience so far of climbing one mountain here. Last year I was lucky enough to reach the top of Snow Mountain or Xueshan, the second highest peak on the island at 3886m. Around that same time I had a scheduled climb of Yushan or Jade Mountain the highest peak but it was cancelled due to heavy rains.

Climbing a mountain in Southern Taiwan intrigued me. It’s the tropical part of the island. But still cool to cold up top. This country has the highest density of mountains to land mass in the world. So there’s lots to see. Lots to climb. At 3092m Mt. Dawu North is one of the smallest of the one hundred great mountains over 3000m. But definitely not the easiest. A steep grade past the last camp combined with scrambling, assisted with ropes and ladders and you’ll have a nice little challenge getting to the top.

We drove from Taipei on a Friday evening. Stayed overnight in a little hostel in Tainan then woke up early the next morning to drive to the trailhead near the city of Pingtung.

It took approximately six hours to reach the government camp where we spent the night. We started our ascent to the top at 3am with hopes of a spectacular sunrise. We had great weather but some early morning fog made the sunrise a little less dramatic. But the views? So amazing. There is a ridge you travel on and if the skies are clear enough you can look on one side and see the Taiwan Straight. Look over the other and it’s the Pacific Ocean. I took my Gopro with me and strapped it to my head in hopes of passing on the experience. I hope you enjoy the video above.

Mt. Dawu Taiwan. Elevation 3092 meters. The highest peak in the Southern part of the island. It’s one of the smallest of Baiyue, the 100 greatest 3000m mountains of Taiwan. Don’t underestimate its comparative smaller size like I did though. It’s a strenuous climb. But the reward outweighs the work. A beautiful narrow ridge that overlooks the Taiwan Strait on one side, The Pacific Ocean on the other. I was with my friends Yilang and Jackie for this unforgettable hike of the highest point in Southern Taiwan. It’s so awesome. I don’t think I’ve ever seen a view quite like it before. 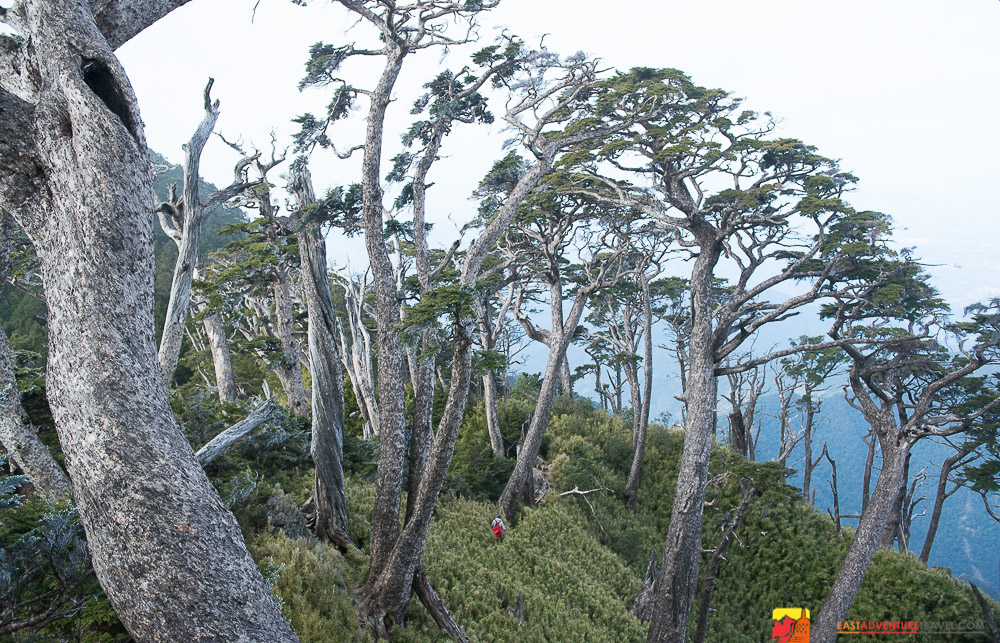 Tsuga chinensis or Taiwan or Chinese Hemlock on the ridge of Mt. Dawu North