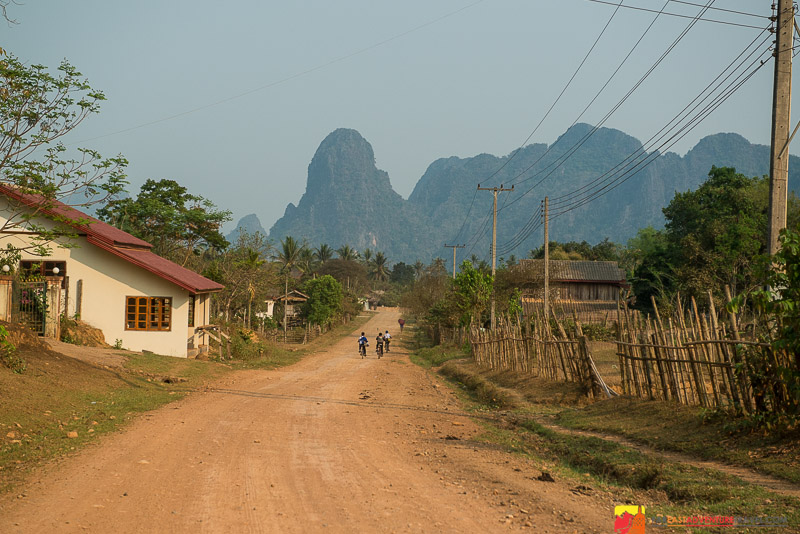 This is John Saboe your host and the publisher of Far East Adventure Travel and I am once again next to the great Mekong River in Laos. This time I’m in what some say is the cultural capital of the country, Luang Prabang. You could call it the spiritual capital as well with the wats or temples and monasteries that are scattered throughout the town. In my last podcast I was in Vientiane-from there I took a 4 hour bus ride to Vang Vieng-the adventure capital of Laos and now I’m in Luang Prabang.More on Vang Vieng and Luang Prabang in a moment.

Sad to hear about the Thong Khan Kham Market in Vientiane burning down over a week ago. Fortunately there were no injuries. I spent part of my first full morning in Vientiane photographing the market, one of the largest in Laos. It was a mix of wood stalls, and covered areas with carts moving up and down alleys. Fish flapping in big basins, chickens roasting over open grills and live ones fluttering together in big baskets. Heaps and heaps of the greenest produce and fresh tropical fruit everywhere. Watermelon is in season and there were piles of them in trucks and crates wherever you looked. I am hoping that the vendors will be able to relocate to another area soon. In the next few days I will post some of the images I captured on breezy-size.flywheelsites.com for you to view.

I spent four days in Vang Vieng. A four hour bus ride from Vientiane that starts out in the urban sprawl that eventually gives way to rice fields and more agriculture.

Vang Vieng has gone through it’s own turmoil in the last couple of years. Once a mecca for backpackers seeking a cheap place to do drugs, party and tube down the Nam Song River. It got so out of hand with the young crowds drinking, diving into the various drugs available and jumping into the river and to their death. The growing fatalities were enough for the Laos government to step in and shut down the rave bars. I kayaked one day down the Nam Song, my guide pointing to the empty huts and rave shacks that were once filled with the world travellers and partiers and the raves that would go all night.

Vang Vieng is still transitioning. The backpackers are still coming. But the focus has switched from party town to adventure destination.

Lots of possilbiities here for kayaking. Climbing is becoming another big sport here as well as cycling and motorbiking. The area is filled with Karst topography that resembles ancient asian master paintings you’ve probably seen. It’s also the home of some spectacular caves that are all within a day trip from Vang Vieng.

I enjoyed the kayaking, the caving and motorbiking on the backroads through Hmong villages that are still filled with thatched roof huts. I drove through in the afternoon when kids were coming home from school, some of them high fiving me as rode through. I took a short break and stopped for a mixed fruit shake at a stand and just gazed at the dramatic landscape. The hills taken from a scene in Jurrasic Park.

The vibe around here is nice. Laid back, seemingly in slow motion, the real Laos. A wide range of lodgings now from hostels that play reruns of “Friends” 16 hours a day to some luxurious places right on the river. The backpackers and partiers are still here, maybe a little more subdued. I overheard someone whining about doing mushrooms instead of going out. Pretty tame compared to the old Vang Vieng. I spoke with some of the local people and they confirmed it’s a much different place. I’d highly recommend Vang Vieng as part of your Laos itinerary.

One highlight for me was riding my motorbike up and down Lima Site 6, the old airstrip used by the CIA for their covert airline Air America. As I was driving up and down the strip I was trying to imagine all the missions run out of here, the refugees coming and going. The American pilots trying to stay in the air and alive. I shot some footage which I will also post soon on breezy-size.flywheelsites.com.

It was a long bus ride from Vang Vieng to Luang Prabang, seven hours. A little slower than usual. Not one particular thing made the ride longer, maybe just a bus driver taking his time. Why not, what’s the rush. The scenery is dramatic with more Karst but it’s slash and burn season, when farmers burn old crops and bush and start planting the next season of rice and other crops. So there was a haze over the beautiful Karst. I thought it would make a great bike ride, challenging but great, but not as nice in the smoke. We passed through many villages with thatched roofs and stilts.

Arriving in Luang Prabang in the early evening I set out on bike into the main village to explore. A very long night market through the main street covered in tents was a little too low for me. At 193cm I had to walk with a huge slouch. They sell everything here from scarves to silver. Not a pushy environment-very relaxed and friendly. A very different Asian night market, maybe the Laos way?

The beautiful temple on the grounds of the Royal Palace was illuminating on a grand scale surrounded by huge palms and the red tents of the night market. Cozy cafes and restaurants and a distinct French influence completed the exotic feel for me. Where to eat? So many places-including a vegetarian buffet for 10,000kip, or 1.24USD!

I’m here for awhile, exploring the temples, the history, the Mekong, and there’s plenty of cafes to put my thoughts down and plan the rest of my exploration of this unique spot in Asia. One I’ve fallen in love with.