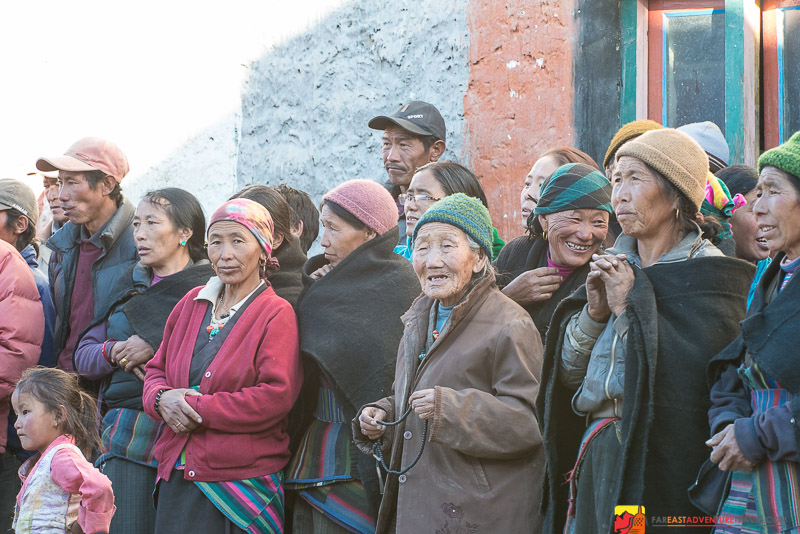 A crowd of villagers gathering for a Puja-Buddhist celebration-Lo Manthang, Nepal

Hi this is John Saboe the publisher of Far East Adventure Travel Magazine and in this months’ issue there is also a feature on Kagbeni, Nepal, a town that some call the gateway to the Upper Mustang region. This week on the podcast I wanted to share some stories from The Upper Mustang and possibly give you a few suggestions on getting ready for a trek in Nepal.

I remember when I first heard about the Upper Mustang region. It was my first visit to Nepal and I was sitting out on the lawn in front of my hotel in The Thamel section of Kathmandu discussing things to do in the city with my guide, Birendra. I was already planning my return to the country and Birendra had mentioned this mysterious restricted region, The Upper Mustang and how it was one of the most expensive treks in the country because of the $50US/day permit required to visit the area. I had heard about the Upper Mustang region before but this was the first time I heard the word restricted used in regards to it. That word restricted has always been intriguing to me, and at that very moment, on that very hot day in June in Kathmandu the seed was planted for my visit to The Upper Mustang.

There are many beautiful places in the world you can go trekking. There is amazing landscape and mountains in South America, India, Africa and beyond. I’ve been to Nepal a few times now and there isn’t one singular thing that draws me back. I think the opportunity to get up close to the largest mountain range in the world with the highest peaks of course is a top draw. But until you have visited the country and met the people and experienced the diverse culture and how there is a magical synergy between the Buddhist and Hindu beliefs, the warmth and hospitality it’s hard to explain this feeling that you’ll get. I can take pictures of Mt. Everest, Kanchenjunga, Annapurna, but I can’t take a picture of energy and emotions. This may be one of the other reasons why I keep returning.

There are many agencies that can set up a trek for you and unless you are going at the peak time of October it’s usually easy to organize when you get to the capital of Nepal, Kathmandu. Even then, if your group isn’t too large, you can usually set something up within a couple of days.

There are men that walk around the Thamel section of the city, this is the tourist/backpacker center looking for potential clients. I highly recommend not organizing a trek with anyone that wanders around the town looking for clients. I have also gotten bad reports back from people that have booked a trek this way.

There are many reputable agencies that are recommended on trip advisor, Lonely Planet and other sites. Or if you are staying at a guesthouse or hotel you can arrange treks that way as well. Always get a couple of quotes. Sometimes an outfitter might give you a higher price just to see if you’ll pay more and they will have instant surplus profit. Be careful, check your prices against other agencies.

Trekking can be as short as an overnighter or a 5 day trek to Poon Hill in the Annapurna region, or 24 days, like my last one to Kanchenjunga. I’m not going to get into too much on training on this podcast. You need to be physically fit, and have at least, the bare minimum of 3 months of steady training before you go. You won’t enjoy your experience if you’re out of shape, and the danger of getting sick is much higher.

The Annapurna Circuit is the most popular trek in Nepal followed by Everest Base Camp. Something to keep in my with the Everest Base Camp trek is the unpredictability of flights in and out of Lukla, the small village where the trek begins. The possibility of getting delayed in Kathmandu or Lukla are very high due to the weather so you must have some extra days built into your itinerary.

I really enjoyed the Upper Mustang region. It was once called the Kingdom of Lo and only became officially a part of the government of Nepal in 2008. Prior to that the region was ruled by a king. He is still alive and lives part time in Lo Manthang. Up until 1992 no foreigners were allowed in the area. Today anywhere from 1000-2000 visitors enter the region every year. If you go you are looking at a minimum trek of 10 days.

This region is as close as you will get to a Tibetan culture and way of life, outside of Tibet, China. I have been to Tibet and when I first arrived in The Upper Mustang I immediately felt like I was back in Tibet. The landscape, the people and the culture are almost identical and I couldn’t help but feel that this must have been the way Tibet was before the takeover by Communist China.

China is now having an influence in the region by supporting the Nepalese government with highway construction that will eventually see a road from the capital, Lo Manthang, all the way to Kathmandu. Change is inevitable. I am witnessing this all across Asia. If you want to see the Upper Mustang, go now before it forever changes.

It was 5 days of trekking before we arrived in the capital of the Upper Mustang region, Lo Manthang. Walking around the village reminded me so much of my visit two years before to Tibet. I was invited to watch the afternoon meditation of the Buddhist monks by one of the lamas of the local monastery, complete with chanting, drums, bells, and cymbals.

The next day I would ride horseback with my guide Chandra to the Kompa Soldier caves.
We left the guesthouse at 8:30 in the morning to ride north and get as close as 50 kilometres to the border of China/Tibet.

The Kompa soldiers were Tibet’s old army and they were held up in the caves for several years after China took over control of Tibet. For most of those years they were supported by the U.S. government, some were even trained by them. The support stopped when in 1972 then President Richard Nixon met Mao Zedong to began diplomacy between the two super powers.

When we arrived at the caves we had to wait for the caretaker to open up the locked door to get inside. I couldn’t believe that people could live in these cramped conditions for so long. How much these people sacrificed of themselves for this fight for Tibet’s independence, the Dalai Lama, freedom, was unfathomable. Not knowing if they stepped out of the caves to get some water if they were going to return.

We left the caves after about an hour to head back to Lo Manthang. Chandra was a natural riding horse and I had gotten my confidence back after not riding for a few years. We decided to let the horses run leaving our horse boy in the dust. The wind in my face, the horses running free and listening to Chandra’s whistle calls, with the Tibetan landscape and backdrop of the Himalaya, the great peak of Nilgiri in the distance- I was in a complete state of bliss. That afternoon riding horseback in the Upper Mustang of Nepal, the former Kingdom of Lo, what seemed like a secret Tibetan world was one of the greatest moments in my life.

That’s it for this weeks’ edition of Far East Adventure Travel-The Podcast. Thanks so much for listening. Next week, more on Rajasthan India. Until then this is John Saboe, Namaste and safe travels!