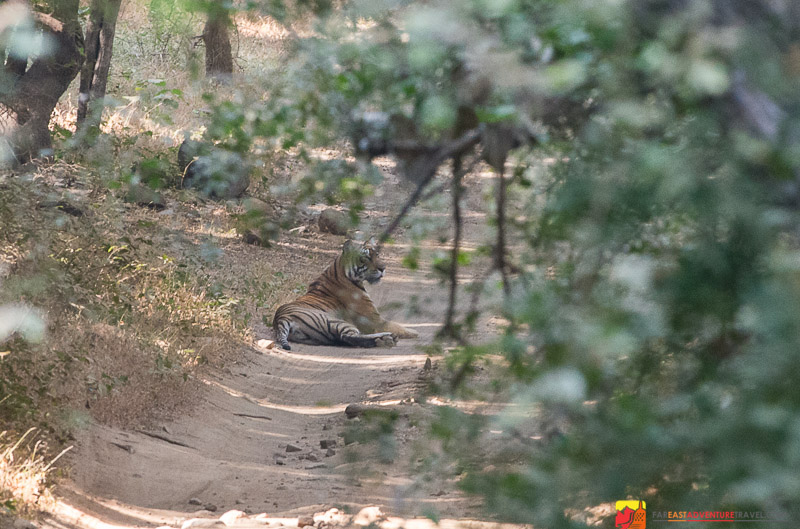 Hello, Namaste and welcome to Far East Adventure Travel The Podcast brought to you by Far East Adventure Travel Magazine-Camel Trekking in The Thar Desert of India-the latest issue on the iTunes Newstand-just go to the itunes app store, search far east adventure travel-download the app and subscribe or go to breezy-size.flywheelsites.com, click on the iTunes store icon and subscribe.

Hi this is John Saboe the publisher of Far East Adventure Travel Magazine and keeping with some of the theme of this month’s issue in this podcast I want to talk a little more about Rajasthan-specifically going on a tiger safari.

There are 3 tiger reserves in Rajasthan-Ranthambore, Sariska, and the latest Mukundara Hills. I’m only going to talk about Ranthambore, because I’ve been there, and this is the reserve where you have the best chance to spot a tiger in Rajasthan. It’s also the most convenient one to get to especially if you are on the golden triangle tour of Delhi, Agra, Jaipur.

The Royal Bengal Tiger’s current population in India is estimated between 1700 and 1875. Their biggest threat is still poaching for it’s hide and body parts which are still used in some traditional Chinese medicine. The good news is the population has been on the rise up, from 1400 in 2008.

Ranthambore Tiger Reserve is located 14km from Sawai Madhopur in Eastern Rajasthan. It’s a 2.5 train ride from Jaipur. If you book a room at a resort next to the reserve your hotel can arrange a pick-up for you at the train station.

A tiger safari is very different from an African safari, in my view. On a tiger reserve in Ranthambore you have two options for viewing. One is called a cantor vehicle, which seats up to 20. The other is a jeep, or what they call a gypsy, which seats 6 people. The safaris are in the early morning with a 7am start, and mid-afternoon around 2. I rode in both and the gypsy is more comfortable and I believe you are more likely going to spot tigers in this vehicle as it can go places the larger cantor cannot.

The Bengal tiger is one of the most elusive animals to spot in the wild. They are a solitary animal for starters, so you will never see a group unless it is a mother with cubs. Of course the other obvious challenge is there just isn’t very many of them. At last estimate there were 50 in all of Ranthambore reserve. That’s in the whole park. At present, the whole park is not open for safaris. Of the 10 zones that are open only the first 5 will give you the best chance at spotting a tiger. Also because the park has so many watering holes and live food, deer, and other animals, spotting them outside of the dry season is also very difficult.

I was there for a November visit not long after the monsoon and I was told my chances of spotting a tiger were about 30%. In the drier months when the water holes have dried up the tigers have few places to go to get water or hunt down animals so your chances then, in the months from January to April can go up to 80-90%. Keep in mind it will be hotter.

I think the most important advice I can pass on is if you know that you are going to be there at least 3 months ahead of time, book your cantor or jeep then. Last minute bookings can be very stressful. Not only are you unsure of getting a spot, the office where you wait in line for seats for the morning or afternoon safaris, is a zoo with people cutting in line, pushing and shoving and generally rude behaviour.

The are some really nice resorts and if you compare them to similar properties in Africa they are a bargain-coming in at about 30% the cost of a 4 or 5 star lodge. I stayed at a place called Khem Villas and had some wonderful hosts, Usha and Goverdhan Singh Rathore. Their manager, Manvendra also took good care of me and after my trip invited me to his home to celebrate Diwali with his family. Goverdhan, a medical doctor is the son of Fateh Singh Rathore who was a leading tiger expert in India and was instrumental in starting the Ranthambore Tiger Reserve. He died in 2011.

I stayed at Ranthambore for 2 nights and went on a total of 3 drives. The first one in a cantor vehicle and the last 2 in a jeep.Waiting in line for a last minute seat on a jeep for the second safari turned out to be an experience I will never forget. The office where you wait in line is a very small wood structure just outside of the park. Many hotel guides, travel agents congregate around the building trying to sneak their client’s ticket form ahead of others. This was a new experience for me.

My hotel guide helped me through the process. It wasn’t that long ago that you didn’t even have to show up at the office in person. For a fee your hotel would send someone down to the office for you while you lounged around the pool. The government changed the rules though, probably due to someone complaining that certain hotels were getting more seats for their clients then others.

I witnessed a shoving match between a travel agent and one of the park officers trying to keep the line-ups uniform. The agent accused the officer of not doing anything to stop people from jumping the queue and proceeded to push him. I had never seen anything like this before. When I told the hotel manager later he laughed and just said, “Incredible India”.

I finally got to the counter and was put on a jeep in zone 7. It’s a beautiful spot in the park where you can see the vast Aravalli Hills. We saw lots of wildlife that afternoon, but no tigers.

The next morning would be my final chance on a safari. I was told that one group that was staying at the resort tried 8 safaris the week before and did not see any tigers.

My other bit of advice if you go. It’s great to want to see a tiger, but it can be very disappointing if you expect to see one. Like I said earlier, they are one of the most elusive animals to spot in the wild and the chances are very slim. But there is beautiful scenery in the park and abundant wildlife. There is also an old fort and ruins throughout the reserve with old palace buildings that date back hundreds of years. You can take a separate tour of the old palace and fort area.

I had to get up at 4:30 to drive down to the office to wait in line for a last minute seat. There was more queue jumping, but I finally got to the counter and got the last seat on a jeep, zone 3-my hotel guide smiled, it was like he knew.

I was sharing the jeep with an Italian family that were living in Delhi, the husband on a company transfer. We drove through many areas of zone 3 that morning, spotting tracks that were only a couple of hours old. The tigers liked to walk on the roads-they liked the feel of the road under their paws.There was definitely a tiger in the area, maybe more than one. But we had covered lots of ground with still no tiger in sight. It was close to 8:30 and we had to start heading back to the gate. I had pretty much given up hope at the point that I would see a tiger.

We drove a little ways and came across a park officer in a jeep by himself about 15-20 minutes away from the entrance. The jeep was sitting idle but he had the road blocked. We stopped, and a cantor then came up behind us.
All of a sudden there was this almost indescribable commotion in the jungle, with all kinds of animal warning signals going off. The kind of sounds they share when there is a threat, a predator in the area. The sounds of trouble. It was a powerful presence. I have been in Africa on safaris and have walked through Chitwan National Park in Nepal but I had never felt anything that strong in the wild before.

We then spotted her, a female bengal tiger lying right on the road around the bend, about 60 meters in front of us, with 3 cubs that were about 10 months old-not quite looking full grown. I couldn’t believe I was seeing a live wild tiger, just lying on the ground with her young close by.

We found out later the officer in the jeep ahead of us was actually there to keep the traffic sounds down around the cubs, so they would slowly get used to the foreign noises for future safaris.

The mother moved ahead and we slowly drove behind the officer in the lead vehicle grateful for the few minutes more we had with her. Even if I go on more tiger safaris in the future I may never have another chance like I did that day in the Ranthambore Tiger Reserve. All of the stress from waiting in line to get a seat, the rudeness, the ugly incidents, all melted away in those few minutes in her presence. We stopped again to watch.

It really was a miracle seeing a mother bengal with her cubs in the wild. She was spread out on the road, absolutely commanding her space and surroundings watching over her offspring. The cubs were playing around in front of her. The excitement we shared with the others around us so privileged to have a few moments with the tigers of Ranthambore was pure joy. I thought to myself at the time-if only everyone who ever thought of wanting a tiger skin as status or some body part from this creature in hopes of better health or energy or whatever could see the power and grace and beauty in front of me-would they still desire it at the price of this animal’s life. Until people stop trying to use external things for meaning and identity the fight will have to continue to protect the Royal Bengal Tiger.
I’m so glad for places like the Ranthambore Tiger Reserve in Rajasthan, India.