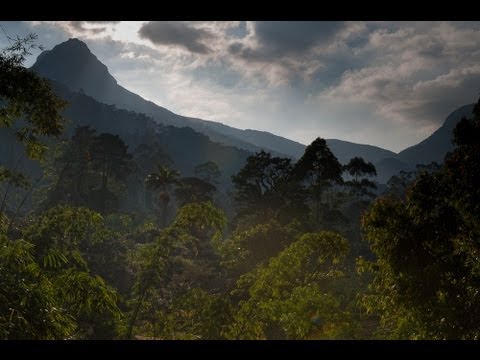 A view of the conical-shaped Adam’s Peak – Sri Pada, from the town of Dalhousie

Adam’s Peak or Sri Pada is located in Central Sri Lanka and is a 2200 meter conical shaped mountain. All religious faiths on the island consider a hike to the top the holiest pilgrimage. Most will make their ascent in the early in the morning to reach the peak for sunrise.

I had left Dalhousine, the small village at the base of the main route just after 2am. Plenty of time I thought to enjoy the sunrise.
Sri Pada actually means sacred foot- print.

Near the summit lies a rock formation in the shape of a footprint.
For Buddhists it represents the buddha’s footprint. Hindus regard it as Shiva’s. In the Muslim and Christian world it is Adam’s.

If you ever go you will wonder how I ever got off course. The route is well marked and lit through the night but I did take a wrong turn and ended up in the nearby tea plantation hills for awhile…

Finally I found my way down and got Sri Pada really has a special feel. As you walk up the steps you will come across many rest stops and tea and snack shops open all night. As well as plenty of places for prayer and worship.

While I was heading up a small group were carrying a man down on a stretch- er. Later I was told an elderly couple were making their way to the top when the man collapsed from exhaustion. He was carried down while his distraught wife followed.

It is a strenuous hike. Plan on anywhere from two and a half to four hours depending on your fitness level and the amount of rest stops you make. Leaving Dalhousie between 2 and 2:30 should give you enough time to reach the top for sunrise.

As incredible as the views were I was most overwhelmed with the hospitality and friendliness of the Sri Lankans. There are simply no better people on the planet.

Finally at the top and the prized view of the triangular shadow of Sri Pada seen only at sunrise. A meaningful hike with amazing views amongst the spirit of the Sri Lanka people.

For Far East Adventure Travel.com this is John Saboe.