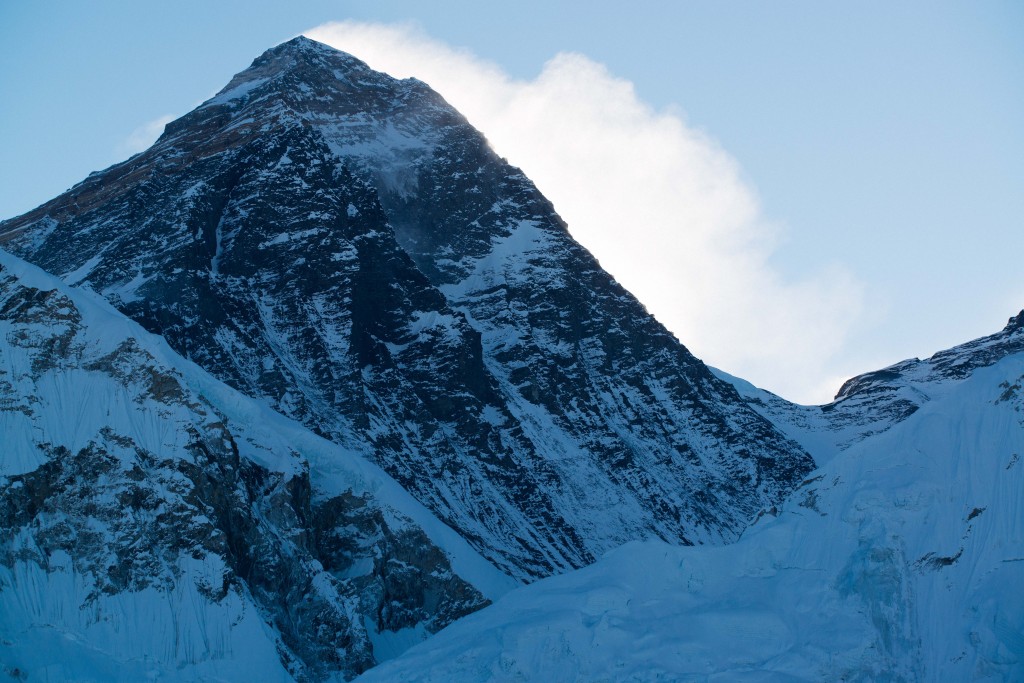 It’s one of the most coveted treks in the world. Everest Base Camp, Nepal. Far East Adventure Travel is proud to present two podcasts completely devoted to the magic of trekking this region. From crossing the sometimes trecherous Chola Pass to the final steps arriving at Everest Base Camp. And an early morning ascent of Kala Patthar for one of the best views of Everest in all of Nepal. Join me John Saboe for one of Asia’s great adventures. Trekking to Everest Base Camp.

Everest Base Camp, Nepal. Right from the start I was in for a hair raising experience. The flight from Kathmandu to Lukla, rated as one of the most dangerous airports in the world is often canceled in October, the busy season due to weather conditions. If it’s not cloudy or windy in Lukla, it is in Kathmandu, making it extremely tricky to complete scheduled flights. You can be stranded in Lukla for days waiting for a weather window. Same this goes in Kathmandu. Days!

Previously I had trekked in a couple of regions in Nepal and had been to Everest Base Camp in Tibet. Up until now I had avoided the EBC trek for more remote and quieter trails in Nepal’s Himalaya. But this was the same ground that many mountaineers had trampled including the first two to summit the world’s highest mountain, Sir Edmund Hillary and Tenzing Norgay.

My curiousity with the trails, the lore of the region and the super friendly Sherpa people that make up the largest ethnic group in the Khumbu Valley could no longer be suppressed because of some crowded trails and teahouses with wine bars.

As we approached Tenzing Hillary Airport in Lukla I couldn’t help but think about the History Channel show Most Extreme Airports. In 2010 it rated Tenzing/Hillary the most dangerous airport in the world. There’s no chance for a go around, meaning an aborted landing on final approach due to the high terrain beyond the northern end of the runway. At the southern end, a steeply angled drop into the valley. A safe landing, and an exciting start to one of the world’s great treks!

Just have to dodge a few yak before we started. Good practise for the crowded trails we were about to enter.

Lukla actually means place of goat or sheep, but all I ever saw were yak, and maybe some horses. As this town is the start and finish for trekking in the Khumbu and Gokyo Valleys there are many lodges, guesthouses, restaurants and even an Irish Pub here! One last stop at the police station for permit checks and we were on our way.

At Thadakoshi the first of many steel suspension bridges over the Dud Khosi River we would cross. We took a rest and lunch at Phakding, where most stay the night before trekking onward the next day to Namache Bazaar. The porters with boundless energy take a break for a game of volleyball.

I had heard that the trails in the Khumbu Valley were crowded in the peak season in October but I was not prepared for the constant herds of yaks used for moving in camping and supplies for the big trekking groups as well as just bringing goods into the valley for many guesthouses and lodges here. Always remember to move to the side when you see caravans coming. These creatures can get quite nasty.

It’s always a great experience to hike through different landscapes and geography on a single trek. The lower Khumbu Dud Khosi valley is full of grazing animals, rich forests and waterfalls.

We arrived at our lodgings for the night in the village of Monjo at an altitude of 2835 meters. The guesthouses at these lower elevations are quite luxurious compared to the high altitude. So it’s a good time to appreciate an attached bathroom with a flush toilet and hot water.

The next morning we were heading to the gate of Sagarmatha National Park, Sagarmatha is the Nepali name for Mt. Everest. Including Everest, the park is home to 8 peaks over 7000 meters high. It’s also where rare species like the Snow Leopard and Lesser or red panda reside. This is also another police station where permits are checked and trekkers registered.

The next stop would be Namche Bazaar, the second largest village in the Khumbu Valley that also has the claim of being the most expensive town in Nepal. Most everything transported into Namche Bazaar must come in on the back of a horse or yak. Sorry though no Mr. Doughnut here, and one piece might cost up to $3. It’s also an acclimatization stop with most staying over two nights before heading into the high Himalaya.

More steel suspension bridge crossings and busy trails before a brief rest stop. This one with special prominence as the first chance to gaze at the top of the highest mountain in the world, Everest.

One last checkpoint before arriving in Namche Bazaar and a customary kora of the Buddhist stupa that greets you at the entrance to the village.

It’s a good place for a two night stay with lots of shops where you can pick up last minute trekking supplies. There’s also plenty of cafes and souvenir stalls.

The next morning we walked up the steep steps of the village for an acclimatization hike and to fix our eyes on the most famous peaks on the planet. Just an everyday place for these kids from the Home Away from Home School, where children in the Khumbu Valley can get a solid education without being separated from their families.

The snow-capped peak to the left-Mt. Everest 8848meters. The highest surface point on the planet, the roof of the world.

The weather can change without warning at high altitude. Within minutes our views of some of the most prominent peaks of the Khumbu Valley disappeared. Ama Dablam, not the highest but certainly one of the most beautiful mountains in the world at first thickly veiled, eventually vanishing in the clouds.

The hundreds of trekkers continued to move up from the village,views or no views, putting in their necessary acclimatization time to ensure a successful Everest Base Camp trek.
We had finished our work for the day and were back to the crowds, traffic jams and gridlock of Namche Bazaar.

The next morning we returned to the trail with the spectacular views of Everest, Lhotse and Ama Dablam joined by the hundreds of others who were on EBC itineraries. Nearly 10,000 tourists will visit the Khumbu Valley or Everest region on average in October, the busiest time of the year.

You really must pay attention when trekking these trails especially when so many others are walking both ways. Not to mention the hundreds of horses and yak used to pack in gear, food and other supplies. Stopping on the trail and stepping out of the way of trekkers and animals is the best way to enjoy the breathtaking views. You must!

It was time to move off this trail at Sanasa and head for the Gokyo Valley. Later to rejoin the trail to Everest Base Camp after crossing the Chola La Pass.

The Gokyo valley’s trails are much quieter even in the busy month of October compared to the Khumbu Valley. Adding a few days to an Everest Base Camp trek will send you into a Shangri La of high altitude lakes, the highest in the world, and breathtaking views of the Himalaya. Arriving at Gokyo Village with Cho Oyu, the 6th highest mountain in the world and a sunrise view of Everest and sister peaks from the top of Gokyo Ri was challenging with rewards few ever get.

Returning to the Khumbu Valley and resuming the trek to Everest Base Camp would take us across the Ngozumpa Glacier, the largest in Nepal and possibly the whole Himalaya before arriving at Thangnak for an overnight rest. The next morning we would rise early for a summit of the Chola Pass at 5420 meters.

This is a challenging portion of the trek with a required early 4am rise and the first hour or so in complete darkness with only a headlamp for light. I personally struggled a little on this day with a slower pace due to a strong cold I was fighting off.

This can be a dangerous pass to cross with an unstable glacier at the top and slippery sections. The approach is steep and perhaps even more dangerous if you are coming from the other direction and the Khumbu Valley. A favorable weather window is important as the pass is almost impossible to cross after a heavy snowfall.

Success and overwhelming joy was shared by all that day under sunny skies. There was still a few trekking hours to log in before arriving at our next stop, Dzhong lha. The views while crossing back into the Khumbu Valley were heart-stopping with Ama Dablam at 6170 meters commanding our attention as we descended into the valley. Ama Dablam means mother’s necklace, the long ridges on either side like a mother’s arms cradling a child. The hanging glacier like the double pendant worn by Sherpa women.

It felt especially rewarding when we arrived in Dzhong lha after the longest and hardest day of the trek. The accomplishment of crossing the Cho La pass felt like a big check mark ticked off. It was now time to rest in the dining hall and warm up by the yak dung fuelled fire.
Some of the most exciting days of the Everest Base Camp trek were still ahead. So pile on the dung my friend, we need to stay warm!

Next time on Far East Adventure Travel Podcast heart stopping views of the Himalaya and the conclusion to The Ultimate Trekking Adventure-Everest Base Camp.

Please like the Far East Adventure Travel Facebook page. You can also follow me on Instagram, Google+, Twitter and Periscope, with live streams from Asia. All of the links are at fareastadventuretravel.com. That’s it for this week’s episode, thanks so much for joining me, until next time this is John Saboe, safe travels and Namaste!