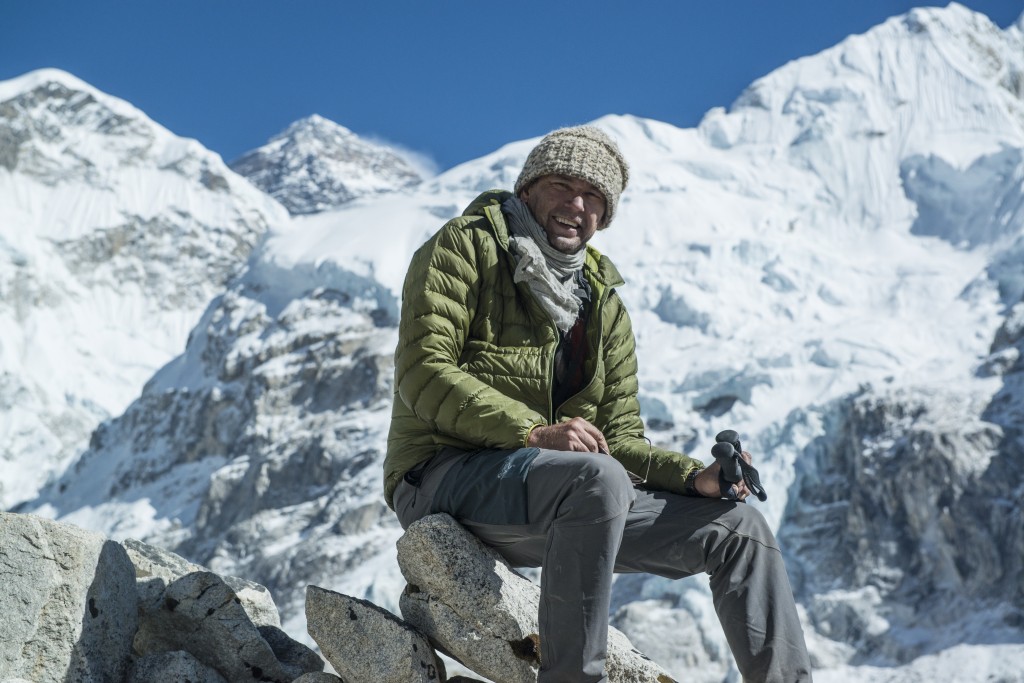 On the way to Everest Base Camp the last stop for pictures before the peak of the highest mountain in the world, left of center, disappears behind it’s neighbours

Having completed one of the toughest days of the trek it was time to move back onto the busy trail to Everest Base Camp. From Dzhong La the next stop was Lobuche, with modest accomodations below beautiful Nuptse. We were surrounded by stunning views of the HImalaya joined by the hundreds who were on the same journey.

The trail from Lobuche to Gorakshep is only about 5 kilometers but at an average elevation of over 5000 meters it is still challenging, especially when you have a hill to traverse like this one.

Climbing higher affords you the views of the massive Khumbu Glacier. In the distance we could see Kala Patthar, or black rock, the small hill we would summit the next day for the best view of Everest in Nepal without climbing it.

The Khumbu Glacier rises to a height of 7600 meters making it the world’s highest glacier. It’s icefall is the dangerous path that leads to the South col classic Everest summit route.

Gorakshep is another problem spot for trekkers trying to acclimate to the high altitude. This is the high Himalaya and will be the coldest night of your journey through the Khumbu Valley. If you’re energy is low you have a toss up between two side trips, Everest Base Camp, or Kala Patthar. EBC with no real view of Everest except on the way is history, dreams and bragging rights. Kala Patthar is the best view of Everest in Nepal. You decide!

A short rest and lunch break and I was off to Everest Base Camp. An approximate 6 hour return journey to Gorakshep.

This is one of the most spectacular panoramas in the entire Himalaya with more up close views of Nuptse. And you’re last look at mighty Everest in the center before descending further down into the Khumbu Glacier.

The trail, a path that meanders through giant boulders and rocks eventually drops down from the moraine into the Khumbu Glacier.

Finally you find yourself putting in the last steps to the Base Camp marker at 5360 meters. This was the year that 16 Sherpa guides lost their lives in an avalanche on the Khumbu Icefall. All Everest mountain guides had refused to work the rest of the season out of respect for the victims. The whole base camp area was still with the exception of the falling ice in the distance and the trekkers eager to visit the place that has inspired so many to achieve greatness or something else.

So why do you come to Everest Base Camp if you’re not going to climb the mountain. Why spend the hours hiking your way through jagged rocks and moraine, only to find Everest’s peak out of sight. Is it our fascination with the achievement or failure of others? This place which stakes are so high, the line between life and death, razor thin. Maybe I’ve come here hoping I will see or figure out what drives people, what makes them risk everything to summit this mountain.

We all marvelled at the beauty and intensity of this place that draws people from around the world hoping to accomplish what few ever have. To summit the roof of the world.

It was time to leave this hallowed ground of mountaineering for the long walk back to Gorakshep. My feelings now were more about a deeper respect than success, accomplishment or achievement. It’s a feeling that is best described by The Sherpa people of the Khumbu Valley who call Everest Qomolungma, the Mother of The World.

One last look at Everest before a night’s rest and an early rise up the black rock, Kala Patthar for Nepal’s best view of the summit! As the sun set and we neared Gorakshep a veil of clouds blanketed the Everest range for the night putting to sleep the giants of the Himalaya.

The next morning we walked up Kala Patthar, the Himalaya revealing it’s beauty with the first light.

When we reached the top at 5545 meters Everest was finally allowed to reveal it’s incredible majesty before us under Nepali skies. It’s a one of a kind privilege to stand before Everest. When you are there you really feel like you’re at one of the most important places on the planet.

It’s power is best described though in a quote from American filmmaker, climber and 5 time Everest summiter David Brashears. “The mountain doesn’t care whether we’re here or not. It doesn’t compete with us. It isn’t burdened by our hopes and dreams. Everything it means to us is only what we bring to it. It’s what the mountain reveals about us that has any lasting value.”