Swinging With Gibbons In Northwest Laos 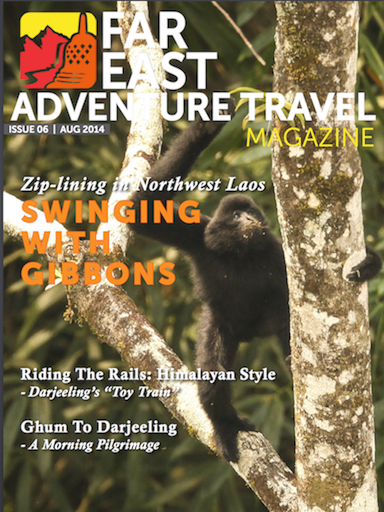 Hi this is John Saboe the publisher of Far East Adventure Travel Magazine and I really did enjoy my travels through Laos, particularly the northern and northwest part of the country which remain undeveloped, at least when you compare it to it’s neighbour, Thailand.

I spent almost 6 weeks in Laos earlier this year and I was surprised to see so many places that would make westerners feel comfortable. Restaurants, accommodations, activities, lots of English signs. But where was everybody? Of course I did run into many travelers but this country I believe sees some of the lowest tourist numbers in this part of Southeast Asia. I’ve been trying to figure out why and I’m sure there are lots of reasons. Laos does not have the same infrastructure and resources that it’s neighbours enjoy. It’s also a landlocked country. There are no beaches! At least on the ocean. Many people from the west visit Southeast Asia for the beaches, surfing, diving and just to have a lazy beach holiday. This could be another reason.

In my opinion Laos is a bargain. Your money will go along way. Great accommodations and amazing food! A wonderful culture and friendly people. What more do you want. I’m not getting paid to say any of this by the way. It’s just my feeling.

The cover story of the latest issue of Far East Adventure Travel Magazine is all about my visit to The Gibbon Experience in Northwest Laos. A chance to get close to the rare black-crested gibbon, the ape species that seems too get the least amount of attention, compared with its’ cousins, the chimpanzees, orang utans, and gorillas, even though many subspecies of gibbons are endangered.

As a child growing up in Vancouver, British Columbia I recall many visits to the Stanley Park Zoo, which no longer exists and always, hearing the loud cries of the gibbons in their small cage, and watching them constantly swinging for the crowds.

Recently I have been able to see gibbons at The Taipei Zoo in Taiwan and when you watch the beginning of the movie The Life of Pei you will notice a black gibbon is featured in the shots of the family’s animal park in Pondicherry, India. This in reality fact was filmed at the Taipei Zoo and this opening scene features one of the resident gibbons of zoo. I think they are absolutely beautiful creatures. I think that short scene struck a chord in me.

So when I had a chance to visit them in the wild with The Gibbon Experience I did not hesitate to book a spot.

I was staying in Luang Prabang which is about an 12 hour bus ride north of the capital of Vientiane when I made my final arrangements for The Gibbon Experience.

Two options to get there from Luang Prabang, a 13 hour bus ride or a 2 day slow boat. I took the bus ride option and you take what is called a VIP bus meaning there are no local stops, probably no chickens or livestock for passengers, and no plastic chairs in the aisles.

Still not the most comfortable ride and on that route there is about a 4 hour portion that runs over the roughest dirt road in Laos, at least it seemed that way at the time, but that was before I traveled by local bus through Northern Laos.You eventually end up in the town of Houay Xai, which is right on the Thai border, right across the Mekong River.

The second morning I was in Houay Xai I walked up the long stairway to the Wat, or temple Jom Khao Manilat, and met some of the novices and Buddhist monks. Most men in Laos will novice in a monastery or wat, some for just a part of their life, some forever. They are always willing to meet and speak with foreigners as they are eager to practise their English. In fact I was recruited to help these young monks rewrite their brochure they liked to hand out to tourists to encourage visits to the Wat. It was a great opportunity for me to dig into some of the local culture and meet some really cool people.

While I was putting together the latest issue of the magazine I was going over the video I filmed including the go pro shots from my head of the zip lining and I still can’t believe I was flying over the canopy of the forest of the Bokeo Reserve. Literally flying, sometimes you would cross a 300 meter line in less than 30 seconds. You don’t realize at the time that your brain is processing so much because of the speed this all takes place at. 3 months later and I still look at the footage and I’m overwhelmed. You are literally Tarzan of the jungle flying from one platform or treehouse to another.

Living in the treehouse was another unforgettable experience. At times I felt like I was in a capsule, maybe even a little trapped knowing I couldn’t just walk out the door without having to strap on a harness. But I often found myself glued to the views which were almost 360 degrees! It’s a completely different experience then looking out a window with a great view or even being on a deck or balcony. You literally become apart of the forest and environment. It’s wrapped around you, your’e literally embraced by it.

The gibbons fortunately were not elusive on my stay in The Bokeo Reserve. The first morning I awoke early, just before their singing started at 6am. A hooing sound gradually growing louder, higher,stronger. Have a listen…..

First usually the male starts, followed by the female in one of the most unique duets in nature. Some say the singing reminds them of whales. There are some very high pitches at times. The climax is a burst of sounds some so high pitched they seem almost like they are created by electronic instruments. We could not see the gibbons in the early morning,the cloud and mist from an overnight rainfall still lingered and covered the forest canopy. It made the encounter all the more amazing and spiritual.

I really am grateful for such places like the Gibbon Experience and the Bokeo Reserve. Concerted efforts towards protecting this incredible species of the ape family, the black-crested gibbon.

Read all about the Gibbon Experience in The Bokeo Reserve of Northwest Laos in the latest issue of Far East Adventure Travel Magazine on the iTunes Newstand. Stories, images, videos, audio commentary plus stories from one of my favorite places in India, Darjeeling. Go to the iTunes App Store, search Far East Adventure Travel, download the app and subscribe. Now get a 30 day free trial. You can also visit breezy-size.flywheelsites.com click on the App Store icon, view in iTunes and download the app to subscribe.

That’s it for this week’s edition of Far East Adventure Travel The Podcast. Next week,stories from West Bengal, India. Until then this is John Saboe, thanks for much for listening! Safe travels and Namaste.