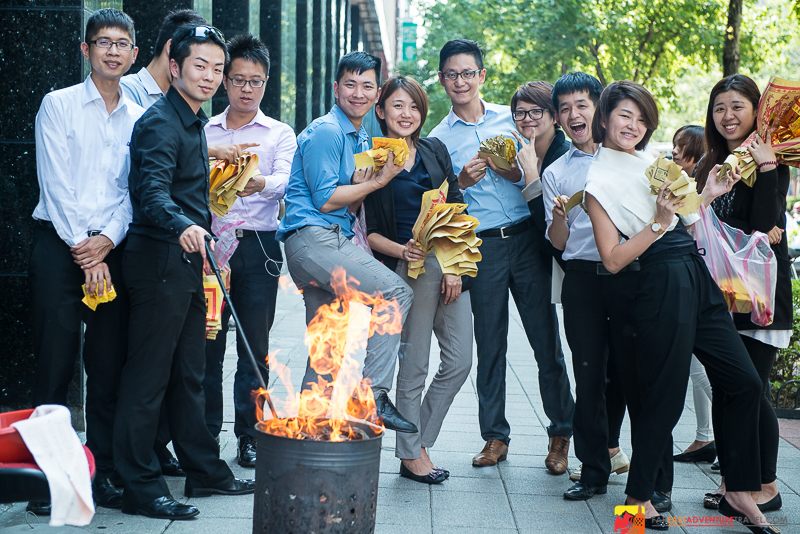 Hi this is John Saboe the publisher of Far East Adventure Travel Magazine coming to you from Taiwan where right now it’s the midsummer Hungry Ghost Festival a very important time in Taiwanese culture and the subject of this weeks podcast.

I spend so much time in Taiwan, why? Because I just love it! One of the things I appreciate and enjoy the most about Taiwan and it’s culture is the integration of beliefs whether they are religious or folk into everyday life. People that don’t even consider themselves religious practise these rituals all the time.

You see it when you walk down a busy street at the beginning or middle of the month. Many businesses will have a small metal cage they will burn paper money in to keep the Gods happy and bring good luck to their business. They will also have a table with food and drink offerings for the Gods as well. 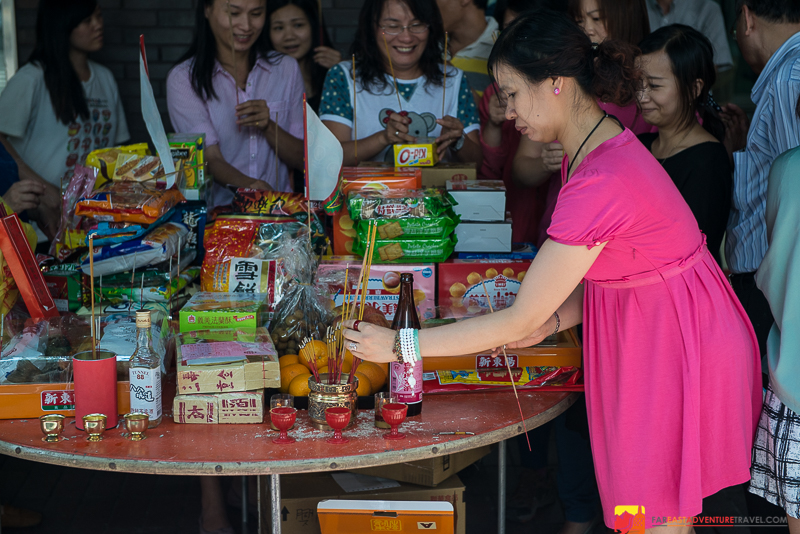 There is a certain energy you feel here, a connection with ancestors, Ghosts, that is powerful and makes you feel that there is a much bigger world than just your own. It’s especially so right now during the midsummer Hungry Ghost Festival.

The Taiwanese and in general Chinese culture believe that the 15th day of the 7th month of the Chinese calendar year ghosts and ancestors visit the earth from the lower realm, and actually it’s thought they stay for the whole month. Also these ghosts that are believed to come through the gates of hell were never given a proper tribute when they died. So when they appear again on earth they are entertained by the living with parades and operas. Food is presented to them and fake paper money is burned so they go away happy and hopefully causing little disturbance during their visit.

Apparently the ghosts also supposedly have, and this came out in my research, not directly from anyone here, needle thin necks because their family did not feed them or they were given the needle thin necks as punishment.

Taboos this month include not going to bed with messy hair, as the ghosts could mistake you for one of them. Also don’t leave your clothes out on the laundry line overnight, the ghosts like to try on clothes and you definitely don’t want the spirit of ghosts in your t-shirts or underwear.

Now I will tell you that not all Taiwanese people believe in these things and some I had mentioned these taboos too had never heard of them before or just laughed. But, some people take these beliefs very seriously.

You will definitely see many tables placed outside on the streets of Taipei and the rest of Taiwan with food offerings, later to be consumed by the people who put the food out. Of course you will see people of all ages and walks of life burning the joss paper money.

Many shops sell joss paper items, not only money, but paper cars, household items, even servants-things that will make your relatives more comfortable in the after-life and of course also for the wandering ghosts.

Operas, puppet shows, plays, even burlesque shows with strippers are performed throughout the month to entertain the lost souls. Usually the first row of seats are left empty for the ghosts-they definitely get priority reservations.

During the hungry ghost festival month people will also avoid starting a business, having a wedding, going for surgery and other important events. Too much risk for bad luck with all of the ghosts wandering around.

Many countries in East Asia follow the same belief of ghost month. In Singapore and Malaysia many shows or concerts take place during the month.

In Japan it’s called Bon, or the Bon Festival and depending on which part of the country you are in it takes place either in the middle of July or August. Bon traditionally includes a dance festival. The Japanese have been following this ritual for over 500 years.

Back in Taiwan many people do not go swimming during the month for fear that one of the ghosts will pull them down and drown them.

Originally in China this time of year was when ancestors were honoured, but once Buddhism spread to China, it was called Yu Lan Pen Festival. Many Buddhists and Taoists believe the festivals origins are from Buddhist scriptures.

Keelung is an easy 50 minute train ride from Taipei’s Main Station Terminal. Once you are there the parade route is less than a 10 minute walk from Keelung’s train station.

Keelung is the second largest port in Taiwan after Kaohsiung in the south. It is located in the northeast corner of the island and is sometimes called the rainy city as they receive a lot of rainfall.

One of my favorite places to visit in Keelung is their famous night market, which goes way back to the 1940’s. It is filled with food stalls, possibly the most per square meter on the island- many that specialize in seafood. The main street is like a gastronomic dream, a foodie heaven and very tourist friendly with signs on the stalls in Mandarin, Japanese, and English.

My friends and I arrived an hour before the parade to have a look around and get a bite to eat before the start. When we finally got our position on the parade route it was another 1.5 hour wait before everything started. It seemed to drag on as each official or politician got up to give a speech.

When the parade started it was actually a little disappointing at first. It seemed to be more a commercial event then the exciting folk parades that are the fabric of Taiwan’s culture. Big floats sponsored by businesses kept passing by us. When an interesting group like dragon dance performers got near they simply walked ahead to the main official stage to give a performance there.

We finally got up from our plastic chairs we had grabbed earlier that were available and left the main route. The people standing around us immediately dove at the empty spots.

A walk around the city for a restaurant to sit in finally brought us back to the main street of the night market. This is where Taiwan once again spoke to me. “You want to see a parade foreigner? Well here you go!”

There it was the Hungry Ghost Festival Parade, at least the edited version-right in our face. The night market street is narrow so it could not accommodate all of the participants. So the giant sponsored floats were diverted down another street. In front of us were the marching bands, the folk musicians, six lion dancers jumping and swaying to booming drums paying respects to the temple. Groups of women dancing and swaying in their uniforms as they moved down the night market street.

The spirit of the festival and the joy of celebration set that street on fire that night. Being so close, sometime one footstep from the performers brought us right inside the event. Once again Taiwan showed me there is no better place on the planet to see a parade.

Festivals and parades are really the treasures of Taiwan. Many of these rituals go back hundreds of years and for the most part through all of the changes in power, control and colonization of the island the beliefs that are ingrained in the culture and everyday have been left virtually untouched.

The practises and way of life have continued on and judging by the enthusiasm of Taiwan’s youth there is no end in sight for these folk and religious rituals and celebrations like The Hungry Ghost Festival. These beliefs are not separated by any physical form like a temple, or church, they are simply the way one lives in Taiwan.

More pictures and video of the Hungry Ghost Festival at breezy-size.flywheelsites.com -while you’re there visit my google plus and Facebook page for more images. Also if you like what you’re listening to please go to the iTunes store and write a review for Far East Adventure Travel The Podcast.

That’s it for this weeks episode of Far East Adventure Travel The Podcast, thanks so much for listening. Until next time this is John Saboe, safe travels and Namaste! 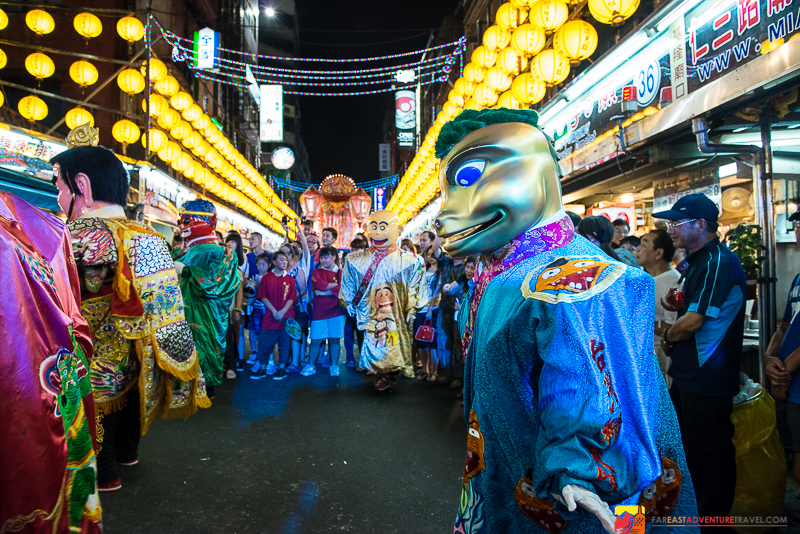