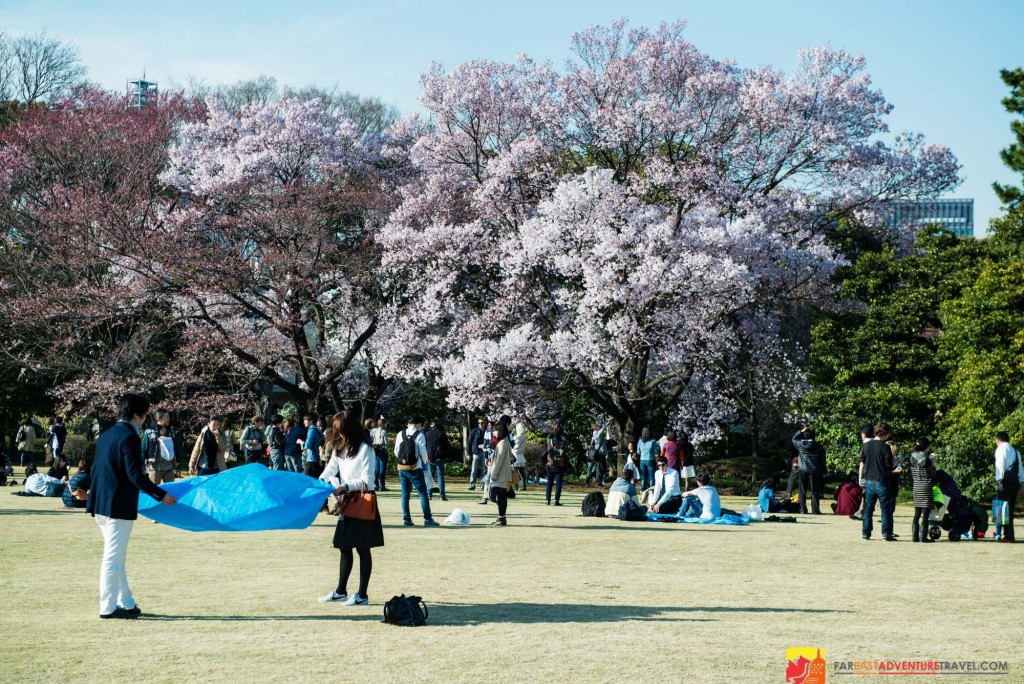 The Japanese call them Sakura, cherry blossoms and it’s one of the most celebrated events of the year when they bloom in the Spring. Hanami, is the viewing and appreciation of the blossoms and Hanami parties can be seen in parks all across the country.

When I arrived in Tokyo recently it was just a little too early for the season. The lack of Sakura didn’t stop people from starting their parties early in Ueno Park, one of the most popular Hanami spots in the city. The plum blossoms as beautiful as they were in full bloom are actually the first real sign of spring in Japan. Plum or cherry blossoms, that’s good enough of an excuse to get the party started.

During the cherry blossom season a Japanese tradition is to find a spot under a tree, spread out a plastic picnic sheet and invite family and friends to sit and enjoy the blossoms or Hanami while eating and drinking, wine, beer, sake or just about anything.

I checked out some of the rest of the park including the hexagonal Bentendo temple with it’s seasonal food stalls and Shinabazu pond where you can rent a swan shaped boat. The park’s history of cherry blossom viewing goes back to the Edo period in the last half of the 19th century when this area was a popular place for Tokyoites to visit.

If it’s your first time to Japan you may be wondering if it will be hard to communicate as it’s known that many Japanese people do not speak English. I met up with some friends in a restaurant near Tokyo Station and we chatted about what it’s like for foreigners to travel in Japan and some of the myths of the language barrier. I asked my friend Akiko who has lived in the greater Tokyo area for most of her life some tips on the best way to communicate when visiting the country.

I decided to take a short trip on the Shinkansen, Japan’s bullet train, to the former capital of the country, Kyoto, which has one of the highest concentrations of temples, shrines and Unesco World Heritage Sites. And for the chance that it might be slightly ahead of Tokyo for Sakura season.

My first stop was the Heian Shrine, one of 400 shinto shrines in Kyoto that is also ranked as an important cultural property in Japan. It’s gardens take up more than half of the area the whole complex sits on and are reputed to have some of the best sakura viewing in the whole country.

I found out later that some of the cherry blossom trees in the Heian Shrine gardens are actually late bloomers, a good place to visit towards the end of the regular season but you will at the least see plum blossoms.

This is a very famous set of stones seen in many movies including 2003’s Lost in Translation starring Bill Murray and Scarlett Johansson.

It had been a week since my first visit to Ueno Park in Tokyo so when I returned I was hoping to see more blossoms. Judging by it’s crowded train station this could have been the busiest Saturday of the season. I was very hopeful at this point, and possibly even feeling a little desperate, as it was my last full day in Tokyo.

It was an amazing contrast, in less than a week the trees were almost completely covered in blossoms and the spirit of the season filled the air with Tokyoites, out of towners, and foreigners enjoying Hanami.

Many had staked out their spot under the trees and had already started their Hanami parties by mid morning.

Proper etiquette for claiming your area starts with spreading out your picnic sheet. Someone must be there at all times to hold the place. I hope at least this guy get’s to start drinking first for being the one to hold his friend’s spot. Many businesses that have Hanami parties for their employees will send a junior person to a park in the early morning just to hold a place for their gathering.

Ueno Park is also home to the Tokyo National Museum established in 1872 . It is Japan’s oldest national museum and the largest art museum in the country.

If you don’t have time to stake out a Hanami spot there’s plenty of places to eat in the park and enjoy the cherry blossoms.

Ueno Park has been one of Japan’s largest parks since 1873 and sees over 10 million visitors a year. There are over 8800 trees on the grounds in total, 800 of which are cherry.

Now I know Hanami is the Japanese term for the appreciation of cherry blossoms but what do they call cat viewing. This pair seemed to have distracted everyone momentarily from the sakura.

Some views of the park from Kiyomizu Kannon Temple home to the goddess of conception. I guess that’s why there are so many women lined up here. It’s a very popular place for ladies to visit that are hoping to conceive. I guess it’s also date night.

Streets everywhere in Tokyo are lined with cherry blossom trees making the appreciation of the season continuous throughout your day of sightseeing and Hanami.

This area was originally part of the much larger Edo Castle grounds when the shogun ruled. Today it’s open to the public and a very popular spot for having a Hanami picnic. During this season it’s quite normal to see women dressed up in traditional kimonos for pictures near the sakura.

It feels like a sanctuary in the middle of the heart of the Tokyo business district.
Late afternoon and we’re graciously kicked out of the park, Japanese style.

The moat area around the former Edo Castle is one of the best spots for cherry blossom viewing. It’s even possible to rent boats here but this area isn’t quite in full bloom. My final stop was Kitanomaru Park just a few minutes walk north of the Imperial Palace grounds.

This area was also once apart of the huge Edo Castle area and is near The Budokan, an indoor arena used for sumo wrestling and made popular in Western pop culture by acts like Cheaptrick and Bob Dylan who recorded live albums there.

Sakura season and Hanami in Japan. I have to say not only was I impressed by the beauty of the trees and the blossoms but by the people of Japan and their heartfelt appreciation and spirit for celebrating this tradition that’s just as much about community as it is nature, renewal, and life.

That’s it for this week’s episode. Thanks so much for joining me. Until next time this is John Saboe. Safe travels and Namaste!